David Rosenberg said its growing increasingly likely Canada will fall into a period of recession in the near-term as the headwinds against the economy continue to stack up.

“Compounding all the other issues on the supply side globally is this energy squeeze we’re seeing,” said Rosenberg, chief economist and strategist at Rosenberg Research, in an interview.

“This is a huge margin squeeze for most producers, and it’s a huge hit to the purchasing power for the 70 per cent of the economy, otherwise known as the consumer.”

Those other issues he’s referring to include global supply chain disruptions, concerns about inflation running too hot, and labour shortages, not to mention the still present threat of COVID-19 outbreaks and business restrictions.

His comments come amid a volatile week for energy prices, amid more robust than expected oil inventories in the U.S., and as Russia offered to help ease Europe’s natural gas crisis…read more.

Posted by The Conference Board of Canada

The Conference Board of Canada released its two-year economic outlook and forecasts that Canada’s real gross domestic product (GDP) will grow 5.1 per cent in 2021. Our projection for the year is down from previous estimates largely because the Canadian economy contracted by 0.3 per cent in the second quarter, mostly driven by a steep 4.0 per cent decrease in real exports.

“The unprecedented levels of pandemic stimulus measures are easing as social distancing restrictions have largely lifted across Canada, but the debt overhang remains a long-term issue,” says Ted Mallett, Director, Economic Forecasting at The Conference Board of Canada. “These critical income measures led to a federal deficit of $228 billion in 2020. While a rebound in revenues, as well as the easing of some major support measures led to an improvement in the deficit this year, the federal government has added massively to its debt in just two years.”

The GDP growth projection for 2022 is strong at 4.4 per cent but growth forecasts for 2023 and beyond are dim with annual gains of 1.6 to 1.7 per cent expected as stimulus effects wear off. While the near-term outlook is positive, COVID-19 variants remain a risk to the forecast in Canada and globally…read more.

Canada’s trade surplus with the rest of the world expanded significantly in August on larger energy exports.

The country’s merchandise trade surplus was $1.94 billion (US$1.5 billion) from a revised $736 million surplus in July, Statistics Canada reported Tuesday in Ottawa. Economists were expecting a surplus of $430 million, according to the median estimate in a Bloomberg survey.

August was the third consecutive month in which Canada’s trade balance was in surplus. Exports rose 0.8 per cent, with energy products rising the most, and imports fell 1.4 per cent.

“Canada’s trade balance and export backdrop showed resilience in August despite lingering supply chain headwinds,” Omar Abdelrahman, an economist at Toronto-Dominion Bank, said in a report to investors. “Commodity exports drove the gain, which more than offset the decline in motor vehicles and parts exports.”…read more. 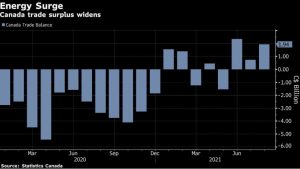 The Global Supply Chain Crisis Could Last Until 2023

Global central bankers have been out and about continuing to promote a narrative that inflation is “transitory.” We’ve seen it from the likes of Powell, Lagarde, Bailey, and Kuroda. Logically, these monetary wonks are right, inflation caused by supply chain bottlenecks will resolve itself, but these officials have yet to provide a timeline because they don’t know.

For more insight on when global supply chain bottlenecks will subside, Dubai’s DP World, one of the biggest international port operators, Chairman and CEO Sultan Ahmed Bin Sulayem spoke with Bloomberg TV at the Dubai Expo 2020 on Friday and said disruptions could last for another two years.

“The global supply chain was in crisis at the beginning of the pandemic,” Bin Sulayem said. “Maybe in 2023 we’ll see an easing.”

He pointed to skyrocketing container rates and said price increases are due to shortages and the accumulated delays. “Freight rates will continue to increase, and the shipping lines are having an amazing time,” he added…read more. 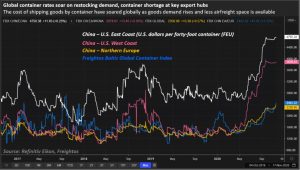 Immigration to Canada is improving from pandemic lows, but it’s still weak. A BMO economics analysis shows the net flow of non-permanent residents was minimal in Q2 2021. It’s better than the beginning of the pandemic when the flows were negative, but not by much. The bank sees this as a big contributor to the rising job vacancies, and will potentially force wages to rise to attract domestic labor.

Canada’s inflow of non-permanent residents is still much lower than normal. During the beginning of the pandemic, there were net outflows, but those have since reversed. Positive flows are better than contractions, but they’re still fairly close to nil, especially in contrast to pre-2020 numbers.

The lack of non-permanent residents has put a major drag on the labor supply. “This is likely adding to the labor shortage situation in Canada, as it appears difficult to pull domestic labor into jobs normally filled by foreign workers. Or it might take more significant wage increases to do so,” said BMO. 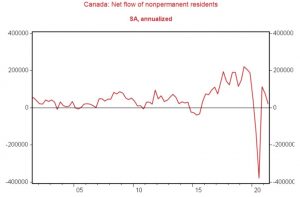