Endeavour Silver CEO Bradford Cooke joins Michael to talk about how to be positioned for the next turn in the commodity cycle – and it’s coming sooner than you think!

Are You Ready For This?

We understand that not everyone is interested in their personal finances – and we respect that, but whether you’re interested or not – what’s coming starting in January 2020 through 2022 will have a dramatic impact on your financial well being. Join us at the World Outlook Financial Conference Feb 7th & 8th in Vancouver – I promise it will be the best investment you make for the year. ~ MC

The sounds of Christmas – carols, maybe the crackling of a log on the fire and the familiar – “oh…a sweater” or “oh, good – a snuggie”.  And who hasn’t experienced the joy of  “a gift certificate.” (I’ve always thought it was an interesting idea to take cash, which you can use everywhere and turn it into a gift card that you can only use in one place.)

We’ve all been down that long, lonely road in search of the perfect Christmas gift. And if you are anything like me, you know what I mean when I say I’ve sometimes come up short.

I’ve got an idea that could put you in the Gift Givers Hall of Fame – but first a little background. I get asked all the time, what’s the best way to get people – young and old – interested in stocks and finance. My answer is straightforward – they’ll be very interested when they get some “skin” in the game.

If you want to make this year’s Christmas profoundly memorable – buy them a ticket to the 2020 World Financial Outlook Conference in February, and then buy them 10, 50 or 100 shares of any of the recommendations from the Conference. I promise they’ll start to keep track of their stock on any of the free internet sites or on their cell phone. They’ll follow the news and other events that impact their stock price.

At the Conference on Feb 7th & 8th they’ll hear some of the biggest names in finance including the world’s top economic and financial forecaster Martin Armstrong, Timer’s Digest’s Stock and Gold Market Timer of the Year Mark Leibovit and top stock picker, Ryan Irvine, who each year works with us and the experts at Keystone Financial to produce the World Outlook Small Cap Portfolio, which has delivered double digit gains every year.

I just read that back and it doesn’t come close to reflecting how interesting, rewarding and fun the conference is – or the performance of the recommendations!

Just think of their reaction if they owned 50 or 100 shares of any of the stocks recommended at last year’s conference.

If you want to see someone’s face light up – give them 10, 50 or 100 shares of a stock and look at their expression when it goes up 10%, 20%, over 50%. It beats the old gift certificate every time.  And for some people, the stock market becomes a new hobby.

I’m sincere when I say a ticket to the World Financial Outlook Conference makes a terrific Christmas gift.  Even better if you come with them and share the experience. I’ve had plenty of people come up over the years to say they’ve absolutely loved coming with family, friends, or co-workers. It’s a special weekend – bring someone – you can even go the extra mile and buy them a few shares of one of the recommendations you like.

In the meantime – I hope you have a terrific holiday season.

To book Your Ticket: go to worldoutlookconference.com

P.S.    We Just Made It Even Easier to Make This a Special Gift

As you may know I am hugely interested in educating our younger generation, and to that end we have a special offer – if you buy a ticket – you can bring a student absolutely free. But you have to let us know that you want a student ticket when you purchase your ticket. We have a limited number set aside and we want to be able to accommodate you

Scott Eldridge, CEO of Canarc Gold & Silver explains why investors need to consider the right country and jurisdiction when deciding what precious metal mining and exploration to add to their portfolio.

In September overnight borrowing rates jumped 500% in less than 4 hours. And nobody’s talking about why. Too bad because it’s a major warning.

but then again – so is the pension strike in France.
and – the civil violence in Hong Kong, Chile, Venezuela, Argentina, Bolivia and Columbia.
plus  – the fact that Deutsche Bank just sold $50 billion in distressed emerging market debt to Goldman Sachs.

Forgive me for getting right to it but the above is just a foreshadowing of the major trends that will dominate starting in January and going through 2022. The list is a long one – liquidity crisis, pension problems, social unrest, European banking problems and an emerging market debt crisis.

As Martin Armstrong wrote in July, “I have never witnessed such complete disruption to the world economy on a massive scale of this nature.” And it will impact currencies, stocks, interest rates, precious metals and commodity prices.

The volatility is going to be profound.  That’s one of the lessons to take from the sharp increase in overnight lending rates on September 16th when borrowers went from paying 2% to 10% in a matter of hours. But what’s not being said publicly is – much like in 2008 with Lehman Brothers, AIG and Bear Sterns – banks didn’t want to lend to other financial institutions because they didn’t know what exposure borrowers had to Deutsche Bank’s problems.

The Federal Reserve was forced to step in and provide an average of $75 billion a day to keep the overnight lending market operational, but it won’t fix the underlying problem of declining confidence and liquidity. And the Fed is still injecting money with no end in sight.

Declining confidence and lack of liquidity is the recipe for a “no bid” market, which is what keeps me up at night because it won’t be the last time. (Let that sink in for a moment)

We are on the cusp of the next phase of the monetary crisis and the liquidity problem is just one aspect – and it’s not difficult to understand.

Quick question, would you lend your money to the government or a bank if they promised to give you less back in five or ten years? Probably not – and that’s the problem with negative yield bonds. Instead of buying them, individuals and pools of capital are choosing to put their US cash in safety deposit boxes or other safe keeping thereby removing liquidity from the system.  Keep in mind that 70% of all US cash is held outside the US – and that’s creating a big problem.

The central banks aren’t talking about it because they don’t want to spook investors, because once confidence erodes you get a situation like the credit crisis in 2008.

I appreciate that you’re not reading or hearing about this in the mainstream media – and there is certainly no shortage of opinions, predictions and recommendations. The only way to evaluate and judge whether one approach or model is better than another is the examine the track record.

And on that score I don’t know a better one than what we’ve produced at the World Outlook Financial Conference. We unequivocally forecast the record bull market in US stocks since March 2009 and have not wavered. We recommended every dip in quality stocks as a buying opportunity. Our World Outlook Conference Small Cap Portfolio, done in conjunction with Keystone Financial, has never failed to return double digit profits. As I write today, the 2019 recommended portfolio is up 61%.

As we’ve been predicting on MoneyTalks since 2010, the European Union would come apart. Then, as predicted, Brexit went through alongside the rise of other anti-EU parties. And given the current protests in France over the attempt to adjust unaffordable public sector pensions – don’t be surprised if you start hearing rumblings in France about leaving the EU.

Our recognition that the problems in Europe would push hundreds of billions of dollars worth of euros into the US has been key in our recommendation to buy US dollars, stocks and bonds.  Since the 2013 WOFC we’ve recommended putting 30% of your money in US dollar denominated assets and cash. We upped that to 50% in 2014. We first recommended playing the euro to go down when it was at 1.54 to the dollar – it’s now in the 1.10 range – and my bet is that there’s more money to be made on the downside.

The US dollar related recommendations illustrate the approach we take at the World Outlook Financial Conference and on MoneyTalks. You start by getting the big picture right and then devise strategies to take advantage of it.

At this year’s conference we’ll talk about when that major, pivotal US dollar trend will reverse. You can’t afford to get this wrong.

Maybe we’ve been lucky that every year our specific recommendations have paid for the price of a ticket several times over. Although past performance is not a guarantee of future results, featuring analysts with exceptional track records like Martin Armstrong, Ryan Irvine and Mark Leibovit (who in September, Timers Digest named gold market and stock market Timer of the Year) – puts the odds in our favour.

As you probably guessed, I want you to come to the World Outlook Financial Conference. Why? Because we’re living in a time of historic change and people who don’t understand what’s going on are going to be financial road kill. Of course, many people already are – but conference attendees who followed our past recommendations into the US dollar, US stocks, real estate in Vancouver, Phoenix, Montreal and Victoria, and have bought the World Outlook Small Cap Portfolio have done well.

But I also understand that not everyone is interested in their personal finances – and I respect that, but I’ll warn you that whether you’re interested or not – what’s coming starting in January through 2022 will have a dramatic impact on your financial well being.

PS – The World Outlook Conference is Friday Feb 7th  and Saturday, Feb. 8th  at the Westin Bayshore in Vancouver.  For tickets and other details CLICK HERE.

PPS – As you probably know I’m big on educating our younger generation – goodness knows I go on about it enough. To that end we have a special offer – if you buy a ticket – you can bring a student or some other young person in your life, absolutely free. The only thing is that we ask you to let us know that you want a student ticket when you purchase your ticket. We have a limited number set aside and we want to be able to accommodate you

Michael will be broadcasting live today from 2pm to 4pm pacific time as part of the 42nd annual CKNW Kid’s Fund Pledge Day. With your help, the Fund enhances the lives of children living with physical, mental, social, and behavioural challenges. Donate to make life a little easier for children with special needs. 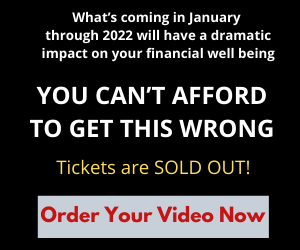