Hundreds of billions of dollars in cash have been amassed by big investors in the last few weeks of 2021, setting the stage for a massive risk-on move into equities in the new year.

Investors added more than $43 billion into money market funds last week, bringing the total amount of cash raised in the past seven weeks to a massive $226 billion, according data from Goldman Sachs. The money market stockpile has not declined in 2021 despite the rally in stocks, with assets under management in cash equivalents standing near a record $4.7 trillion, the data showed.

“My core thesis is that money will come out of negative real yielding cash and out of bonds aggressively and early in 2022 following December board room asset allocation meetings,” Scott Rubner, analyst at Goldman Sachs’ global markets division, said in a note.

“Every private wealth advisor in the world is conducting ‘year-end allocation review’ meetings right now. The feedback will be largely that investors hold too much cash with rising inflation,” Rubner said…read more.

Justinflation is wreaking havoc, so why is everyone ignoring it?

Justin Trudeau’s Just-inflation is driving up the cost of everything, and yet, the media, bankers and the Liberal government insist that mysterious global forces – not the Fed’s unprecedented spending, borrowing and printing of money – are to blame.

Pierre is the leading voice fighting back against Trudeau’s reckless policies.

On today’s show, he not only clearly articulates the problem but also provides specific solutions to get Canada back on track, and make life more affordable for working Canadians…read more.

Join Plurilock CEO Ian Paterson on Monday Nov 29th at noon pacific time, 1pm MT, for an update on the cybersecurity sector, an overview of PLUR’s string of acquisitions and record earnings in Q3, plus Q & A for investors considering adding cybersecurity to their portfolios. CLICK HERE to register.

This week’s EVA provides another sneak preview into David Hay’s book-in-process, “Bubble 3.0” discussing what he thinks is the crucial topic of “greenflation.”  This is a term he coined referring to the rising price for metals and minerals that are essential for solar and wind power, electric cars, and other renewable technologies.

It also centers on the reality that as global policymakers have turned against the fossil fuel industry, energy producers are for the first time in history not responding to dramatically higher prices by increasing production.  Consequently, there is a difficult tradeoff that arises as the world pushes harder to combat climate change, driving up energy costs to painful levels, especially for lower income individuals.

What we are currently seeing in Europe is a vivid example of this dilemma. While it may be the case that governments welcome higher oil and natural gas prices to discourage their use, energy consumers are likely to have a much different reaction…read more.

We’ve talked about the Commodity Super Cycle – a major theme in the coming years. Uranium is on our list of commodities that stand to benefit from this cycle, and this is why our managers began investing in the sector earlier this year. Its price has exploded recently due to short term developments, but the long term fundamentals for the nuclear story are strong. ~ Sandor Kiss, Integrated Wealth Management

One week ago and about a year after we turned bullish on the uranium sector, which has more than doubled despite Democrats’ unwillingness to include uranium in their ESG umbrella, we presented readers with a unique take from Harris Kupperman, who explained how the Sprott Physical Uranium Trust could serve as a springboard to substantial further gains not only in the price of uranium itself but also uranium-linked stocks and ETFs. Comparing its action to the positive feedback loop that emerged in the Grayscale Bitcoin Trust, which served as the springboard allowing bitcoin to rise from $10,000 a year ago to over $60,000 earlier this year, Kupperman said that the Sprott Trust had the potential to “upend” the illiquid uranium market by creating an actual physical shortage that would then translate to much higher prices, to wit:

The Sprott Physical Uranium Trust commonly (known as SRUUF), is the entity that has upended the uranium market. Since launching its ATM 13 days ago, it has acquired 2.7 million pounds of uranium. This is an average daily rate in excess of 200,000 pounds or roughly a third of global production on an annual basis. If GBTC is the roadmap to follow, as the price of uranium begins to appreciate, the inflows into the trust should accelerate. Interestingly, there are plenty of other entities also purchasing physical uranium, uranium that utilities were counting on for their future needs. The squeeze is on…read more. 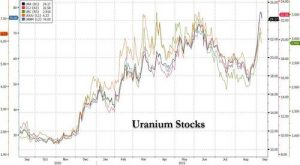