Bill Gross is talking trash about the bond market — literally.

In a meandering and sometimes off-kilter investment outlook posted on his website, the onetime bond king said longer-term Treasury yields are so low that the funds that buy them belong in the “investment garbage can.”

Ten-year yields traded at 1.29 per cent as of 6:07 a.m. in New York. They are likely to climb to 2 per cent over the next 12 months, handing investors a loss of roughly 3 per cent, he wrote. Stocks could also fall into the category of “trash” should earnings growth fall short of lofty expectations.

“Cash has been trash for a long time, but there are now new contenders,” said Gross, who co-founded Pacific Investment Management Co. in the 1970s and retired in 2019. “Intermediate to long-term bond funds are in that trash receptacle for sure, but will stocks follow? Earnings growth had better be double-digit-plus or else they could join the garbage truck.”…read more. 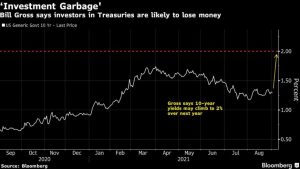 TOKYO — Japan’s benchmark Nikkei Stock Average dropped to a one-month low on Monday morning after indications that the U.S. Federal Reserve could move away from ultra-easy monetary policies sooner than expected.

The Nikkei index at one point fell over 1,000 points, or 3.5%, to reach its lowest level since May 20. The benchmark declined below the 28,000 mark with shares in 97% of the index’s 225 companies trading lower. The broader Topix index was down over 2% while the startup-heavy Mothers market fell 1.6%.

The sell-off in stocks accelerated after remarks from St. Louis Federal Reserve President James Bullard on Friday that an initial rate increase could happen in late 2022 as inflation risks rise.

Investors have reacted strongly to the possibility of rate rises sooner than has been expected. In March, the Fed had signaled there would be no rate hike until at least 2024…. CLICK for complete article

U.S. stocks dropped Wednesday after the Federal Reserve raised its inflation expectations and moved up the time frame on when it will next hike interest rates.

The policymaking Federal Open Market Committee indicated that rate hikes could come as soon as 2023, after signaling in March that it saw no increases until beyond that year.

“This is not what the market expected,” said James McCann, Aberdeen Standard Investments’ deputy chief economist. “The Fed is now signaling that rates will need to rise sooner and faster. … This change in stance jars a little with the Fed’s recent claims that the recent spike in inflation is temporary.”

Major equity benchmark traded off their lows of the day after Chairman Jerome Powell said at a news conference that the so-called dot-plot projections that detail members’ forecasts for future rate increases should be taken with a “big grain of salt” and that the liftoff is “well into the future.”

The central bank gave no indication as to when it will begin cutting back on its aggressive bond-buying program, which also helped bolster markets. The Fed has been purchasing $120 billion worth of bonds each month as the economy continues to recover from the coronavirus pandemic.

JPMorgan is hoarding as much as $500B in cash

Jamie Dimon believes cash is king – at least for the time being.

JPMorgan Chase has been “effectively stockpiling” cash rather than using it to buy Treasuries or other investments because of the possibility higher inflation will force the Federal Reserve to boost interest rates, Dimon said Monday during a conference. The biggest U.S. bank by assets has positioned itself to benefit from rising interest rates, which will let it buy higher-yielding assets, he said.

“We have a lot of cash and capability and we’re going to be very patient, because I think you have a very good chance inflation will be more than transitory,” said Dimon, longtime JPMorgan CEO.

The Federal Reserve seems to be having an identity crisis.

Not that long ago, the U.S. central bank was seen solely as a watchdog of the nation’s financial system as well as the entity charged with using its various policy levers to control inflation and keep unemployment low.

In recent months, the Fed has extended its responsibilities as a bank regulator to the fight against climate change. Where once the Fed used its power over interest rates to control inflation and keep borrowing costs low, it now is taking on the role of making sure job gains are spread equally among income, racial and gender groups.

If this doesn’t sound like your parents’ Fed, or even legendary former Chairman Paul Volcker’s, you’re not alone.