Dishwashing robots are ‘better for the environment,’ Dishcraft CEO says

“When you automate, you can create much better efficiencies,” Linda Pouliot, CEO and co-founder of Dishcraft, told Yahoo Finance (video above). “We use only a quarter of the water and a tenth of the power that a traditional dish room would use. And so, it’s better for the environment. And it’s certainly better for the dining experience. And it’s also better for the operator.”

The Bay Area-based startup has received over $45 million in funding so far. Pouliot said that the service works “very much like a linen service.” Dishcraft delivers sanitized dishes each day to kitchens and picks up used ones, which are brought to a centralized hub where they are washed by robotic dishwashers…read more. 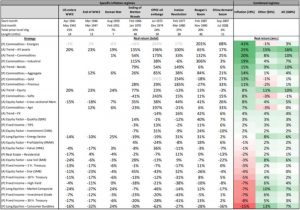 While the overall retail industry struggled amidst the global pandemic, eCommerce sales managed to reach unprecedented heights. In 2020, retail eCommerce sales grew by 27.6%, reaching a total of $4.28 trillion worldwide.

In 2020, Latin America’s eCommerce market saw the most growth of any region, surpassing Asia-Pacific’s growth for the first time since 2010.

Restrictions in Buenos Aires were on and off from late March until early November 2020, and after restrictions were lifted, citizens were encouraged to practice “intelligent” social distancing and be more cautious when socializing.

At the country level, Argentina was the fastest growing eCommerce market in 2020, with a 79% increase in online sales compared to 2019—almost double the worldwide country average…read more.

A brief history of smart glasses:

Facebook launched its first-ever line of smart glasses in partnership with Ray-Ban yesterday. The glasses, which start at $299, contain tiny microphones, cameras, and speakers to keep ’em stylish.

With the glasses, you can…

Amazon is bringing its automated checkout technology to a pair of Whole Foods stores, the company announced Wednesday, marking the latest test of the grab-and-go system in a full-size supermarket.

In a blog post, Amazon said the technology, called “Just Walk Out,” is coming to two Whole Foods locations scheduled to open in 2022. One store will be located in the Glover Park neighborhood of Washington, D.C., and the other in Sherman Oaks, California.

Amazon’s “Just Walk Out” technology allows shoppers to enter a store by scanning an app and exit without needing to stand in a checkout line. Cameras and sensors track what items shoppers select and charge them when they leave…read more.

The increasing frequency of both natural and man-made catastrophes such as worldwide pandemics and climate catastrophes has re-validated the urgency to establish humanity as a multi-planet species. Indeed, the founding ethos of Elon Musk’s private spaceflight company SpaceX was to make life multi-planetary, partly motivated by existential threats such as large asteroid strikes capable of wiping out life on our planet. However, one of the biggest challenges to making this dream a reality is how to get to distant stars and planets within a human lifetime. Consider that with conventional fuel rockets, it takes about seven months just to get to Mars, and a ridiculous 80,000 years to get to the nearest star, Proxima Centauri, using our fastest rockets. This means that ordinary rockets are simply out of the question for interstellar travel, and something a little bit more out there is needed.

Luckily, we might now have the answer to this space travel conundrum.

Once the exclusive province of science fiction films, space colonization has been moving closer to becoming a reality thanks to major advances in astronautics and astrophysics; rocket propulsion and design, robotics and medicine. Trekkies, along with the otherworldly technology featured in the Star Trek series, have helped define the science fiction universe. One of the most mind-boggling of these technologies from those shows is the “Impulse Drive,” a propulsion system used on the spaceships of many species to get across the galaxy in amazingly short timeframes measured in months or a few years rather than centuries or millennia…read more.