A Time for Silver with Jason Weber

Are we nearing a cycle bottom for silver and silver stocks? Is there a buying opportunity in Q4? Jason Weber, CEO of Alianza Minerals joins Mike to explore the silver and precious metals markets.

Gold-backed cryptos are shining in 2022, market cap hits $1B for the first time

The market capitalization of gold-backed crypto tokens increased by 60% in 2022 to surpass $1 billion for the first time in history, according to Arcane Research in its latest weekly report.

In 2022, investors have been rushing to the perceived safety of gold-backed crypto assets, whose value is pegged to the price of gold. 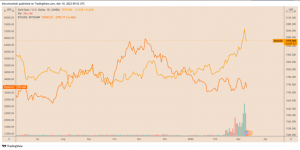 Gold blasted to its highest since 2020 after Russian forces attacked targets across Ukraine, triggering the worst security crisis in Europe since World War II and further crushing risk sentiment across the global markets.

On Wednesday evening, Russia President Vladimir Putin vowed to “demilitarize” Ukraine and replace its leaders, while the West threatened additional sanctions in response. In response, US President Joe Biden announced he would impose “further consequences” on Russia after what he called an “unprovoked and unjustified attack.”

Evidently, US futures and European stocks both tumbled, while Treasuries rallied. Gold jumped the most in almost two years, even as the dollar strengthened. Bullion priced in euros even hit an all-time high…read more. 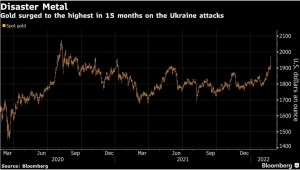 Recently the Central Bank of Ireland joined the ranks of sovereign gold buyers, adding 2 tonnes of gold to its monetary gold reserves in 2 months, consisting of a tonne of gold bought in each of September and October 2021.

While in relative terms, the actual quantity of gold added by the Irish central bank was quite small, in percentage terms it was very substantial, since in August Ireland only held 6 tonnes of gold (supposedly held at the Bank of England), and as of the end of October Ireland now holds 8 tonnes of gold, i.e. a 33% increase (and a significant number for those in the know).

For example, during October 2021, while three of the four largest sovereign buyers of gold in the world were the notable gold aficionados namely Kazakhstan (6 tonnes), India (3.8 tonnes), and Russia (3 tonnes), the fourth, was Ireland (1 tonne), not what you would expect…read more. 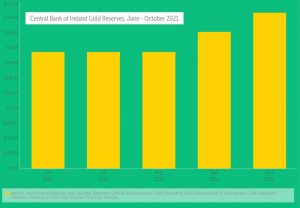 Now that aggressive foreign policy toward China has attracted bipartisan consensus, evidenced by the fact that President Biden has opted to keep certain tariffs imposed by the Trump Administration in place, Beijing is looking for new ways to squeeze Washington. For years now, we have been warning about the risk of China cutting off supplies of 17 rare earth metals critical for the production of tech gadgets.

Earlier this year, we reported that Beijing was keeping a rare-earth export ban in its “back pocket”. Now, it appears the CCP is moving to tighten state control over rare earth production so that they might more easily control who gets the metals.

Whereas rare earth metals were previously mined by six major Chinese firms, the CCP is merging assets from several state-owned firms to create China Rare Earth Group. The new mining giant will be based in resource-rich Jiangxi Province; it’s expected to allow Beijing more leverage over the supply, and by extension, the price, of these incredibly valuable commodities that are essential for the production of chips and other components used in high-tech products from computers to weapons systems.

China is believed to control up to 90% of global supplies of rare earth metals. Only a small number of rare earth mining operations exist outside China. As for where the rest are mined, the chart below offers some insight…read more. 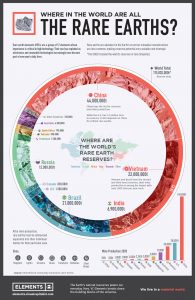