Canada’s economy returned to growth as consumers headed back to restaurants and entertainment venues, propelling spending on services.

Gross domestic product rose 0.7 per cent in August, Statistics Canada said in a flash estimate from Ottawa. That’s a reversal from July, which showed a 0.1 per cent contraction, according to the report.

Economists were predicting a 0.2 per cent drop in output for July, after early guidance indicating a weak start to the second half of the year. The agriculture and manufacturing sectors were among the contributors to the decline.

“Today’s GDP report provides a small tonic to the troubling results from a month ago,” Doug Porter, chief economist at Bank of Montreal, said in a report to investors. “The slightly smaller-than-expected setback in July and nice pop in August suggest that the economy managed to grind out some moderate growth in the summer quarter as a whole.”…read more. 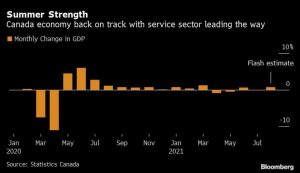 New Zealand’s central bank is looking at the potential of creating a digital currency, with officials in a report Thursday saying such a project could foster further innovation in the country’s payments system.

The Reserve Bank of New Zealand sought public feedback on papers focusing on the future of money which included a proposed digitized currency at a time when the use of cash is declining.

“A Central Bank Digital Currency would see the features and benefits of cash enjoyed in the digital world, working alongside cash and private money held in commercial bank accounts,” RBNZ Assistant Governor Christian Hawkesby said in a statement.

The use of cash dropped to 19% of household transactions in 2019 from 30% in 2007, it said. Meanwhile, people have increasingly turned to phone-based payment apps and digital wallets as well as other new and private technologies that make transactions more convenient. The RBNZ named Apple Pay as an example of a tool for transactions…read more.

The federal government ran a deficit of more than $48 billion over the first four months of its fiscal year, about $100 billion less than the treasury pumped out during the same period one year earlier.

The Finance Department’s regular fiscal monitor says the budgetary deficit between April and July was just under $48.5 billion, down from the almost $148.6 billion recorded over the same months in 2020 when COVID-19 first struck.

Program spending, excluding net actuarial losses, between April and July was $154billion, a decline of about $58.1 billion, or 27.4 per cent drop, from the $212.1 billion in the same period one year earlier…read more.

Canadian Job Vacancies Are Soaring Due To Stimulus, But Wage Growth Isn’t: BMO

Canadian employers are making jobs faster than people can fill them. In two separate reports, BMO economists took a dive into rising job vacancies and wages in Q2 2021. They found job vacancies hit a new record high last quarter. A lack of labor doesn’t appear to have much urgency though, as wages are still only showing modest growth.

Job vacancies continue to climb, reaching the highest level on record. Statistics Canada (Stat Can) reported 731,900 job vacancies in Q2 2021. No data was recorded last year due to the pandemic, but vacancies are 25.8% higher than Q2 2019. About 4.6% of jobs across the country are currently vacant.

The gaps are due to the pandemic, but perhaps not the parts you might expect. Economists have attributed the issue to “disincentives” created by generous government unemployment benefits. BMO sees an additional reason — a rising demand for goods. Stimulus and low interest rates are driving consumption, pushing the need for labor…read more. 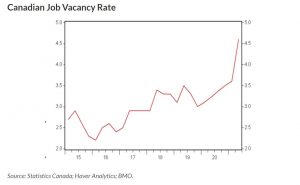 The Federal Reserve on Wednesday held off on a final decision to start tapering asset purchases, but policymakers are evenly split over whether the cycle’s first rate hike should come next year, not in 2023. The Dow Jones, up strongly before Wednesday’s 2 p.m. policy news, rallied further despite the mixed hawkish-dovish Fed meeting outcome.

The Dow and broader stock market may stay volatile as investors react to Fed chief Jerome Powell’s press conference. Powell is seen as one of the Fed’s most dovish members, behind the shift to not just tolerating but welcoming inflation above the 2% target.

The dot-plot, tracking each Fed policy committee member’s individual outlook, had 9 of 18 penciling in one quarter-point rate hike in 2022. That was up from 7 of 18 favoring a 2022 tightening in June projections. However, 3 of the 9 favoring a 2022 rate hike actually think two rate hikes will be warranted next year. That lifted the median projection to 0.3% from the current rate, which targets the midpoint of 0%-0.25%.

One caveat: While Powell and other Fed governors vote at every meeting, regional bank presidents get to vote on a rotating basis…read more.