What’s happening? In 2020, each EU member country will need to meet specific national renewable energy targets set by the European Commission. One route is to blend more biofuels into road fuels, with more countries adopting E10 gasoline, which contains up to 10% ethanol, twice as much as the current E5 standard. In 2019, the Netherlands became the latest European country to introduce E10 gasoline, following Finland, Belgium, France and Germany.

What’s next? In France, E10 sales have now overtaken E5 deliveries. Growth of the E10 ethanol blend have been hindered in Germany by consumer belief that it could harm car performance. Meanwhile, the UK has yet to introduce E10 despite a very ambitious clean energy target, because most fuel stations do not have enough tanks to offer both E5 and E10 simultaneously. The US adopted tier 3 standards on 1 Jan 2020, which means less sulfur in the fuel and lower exhaust emissions of nitrogen oxides. India will move to BS VI specifications which limit the sulfur levels for road fuels to a maximum 10ppm from April 2020. China is implementing Euro 6 equivalent fuel standards and favoring higher levels of ethanol and biodiesel in the blend. The move has been phased in from 2019 and should be completed country-wide by 2022…CLICK for complete article

Goofy Award and Quote of the Week

A high ranking cleric in Iran reminds us of who we’re dealing with in a shocking declaration.

It was always about politics. The BC government never thought that they’d win their Supreme Court case but that wasn’t the goal.

Human Rights Watch latest report labels China a global threat to freedom. Mike asks is there anything China could do to force our government and businesses to rethink our relationship.

A 90 thousand price increase from November to December! How? The one word answer is, Pemberton. Pemberton’s average sales price doubled in value over the one month. November had an average sales price of $695,000 then boom, $1.340 million, however this was the only sale and hardly a trend. 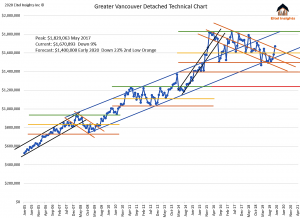 Eitel Insights anticipates 2020 will be another down year for sales prices, we predict prices to test the $1.4 million threshold. At that point, all equity that had been gained over the previous 5 years will have been erased. Also when the market tests $1.4 million that will realize a 23% loss from the peak in 2017 of $1.830 million. If 1.4 Million does not hold as a bottom the market’s next echelon will be $1.275, then $1.225 million. That is as low as we could see Greater Vancouver falling to by 2021 which would signal a 31% price correction from the peak. 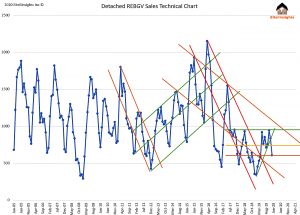 The sales in 2019 broke out of the falling knife trend that had been established in 2016. Rather than the market rebound touted by the Real Estate Board and other analyst, the rationale for purchasing was simple… stress test mitigation. With multiple price test of $1.5 million signalling an 18% price correction from the peak the sidelined purchasers who had been effected by the stress test were able to purchase for the first time in years.

The sales range held firm in 2019 with 950 holding as the most sales in a given month, which is amazing given we started the year with only 344 sales. We anticipate the 2020 market to again test the 950 high water mark.

Noticeable in the chart is the drastic difference between our new reality compared with the scorching hot market that greater Vancouver had become accustomed to. 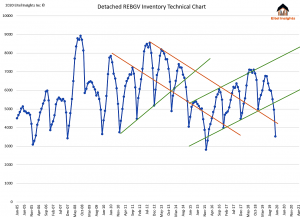 The 2016 levels were based on incredible demand from local and foreign investment.

2019 however we see as merely seller’s fatigue. The market has been evolving to a buyers’ market over the past two years and the seller’s can feel the change. After remaining on the market for months and no offers we believe a majority of the sellers took the Holidays off. In the first half of 2020 the market will again experience a new crop of inventory that will hit the market and push levels back above 6000 active listings. 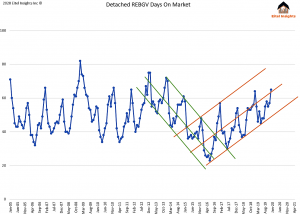 An example of why sellers have given up, the Days on Market is at the highest point over the previous 6 years. Long gone are the days when a listing would sell in one weekend with multiple offers. However sharp listings still do sell in a reasonable time, which was true in 2019. The unfortunate side of that statement is there are increasingly fewer sharp listings.

As this market continues to push lower the purchasers are keenly aware. They will bide their time and be rewarded with increased competition amongst the listings for their valuable time and consideration. 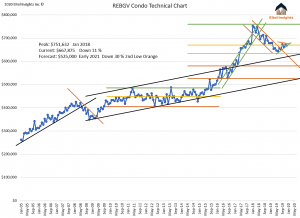 2019 prices had multiple tests to the middle threshold of the current market cycle. Prices were in a 20 thousand dollar price band for most of the year, between $640,000 and $660,000. In the 4th quarter of 2019 prices produced a divergent trend which will likely be resolved with a significant price move in the first quarter of 2020.

We forecast further price losses in 2020, with prices likely breaking downward out of the current divergent trend. That will result in some volatile price movement, with a high probability of seeing prices test the $600,000 threshold.

Ultimately before the market settles at the bottom. Eitel Insights forecasts that the Greater Vancouver Condo market will test the $525,000 threshold. Which would signal a price correction of 30% from the peak.. 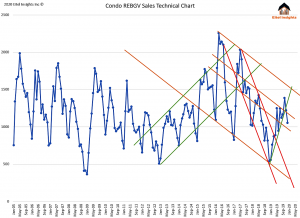 The sales have been much better in 2019 compared to 2018, as is evident in the chart. This V shape reaction is hardly cause for celebration. As we have said before “picking yourself up off the floor doesn’t mean you will win the fight.”

Other analysts have touted the 88% increase to December’s year over year sales. True enough but what they conveniently leave out is that December 2018 was amongst the worst on record in the past 15 years. So beating that mark is less than impressive in our books. 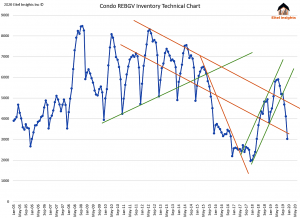 Inventory during the 2nd quarter of 2019 was at the highest levels since 2015 with 5900 active listings. During the 4th quarter the inventory negatively broke out of the staunch uptrend, and fell quite precipitously.

We do expect the market to put in a higher low than was previously low recorded in December 2017; which would instigate a conservative longer term uptrend. With the abundance of inventory through presold units beginning to complete in 2020 and beyond. Eitel Insights anticipates the 2020 inventory will surpass the 2019 levels.

Notably we believe the lack of inventory during the 4th quarter of 2019 is due to seller’s fatigue. Many of the listings had been taken the property off the market to consider how to proceed in this new environment. 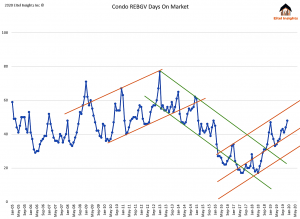 As backing to our thought process that the inventory has been disappearing due to seller’s frustration, rather than any ravenous demand. The Days on Market has continually risen over the past few years and even while the sales have rebounded, the days to sell a property on average is still rising.

This data is not all properties listed, only the sold properties. Indicating the cream of the crop takes well over one month to achieve an accepted offer.

Not all markets are created equal, while some fall, other rise. Become an Eitel Insights client and receive Actionable Intelligence on Real Estate across Canada, visit our website. www.eitelinsights.com

In the one year since New York City implemented a mandatory $15 minimum wage, businesses have been struggling with the increased labor costs, Fox News reported previously. “They’re cutting their staff. They’re cutting their hours. They’re shutting down,” said Queens Chamber of Commerce president, Thomas Grech – who reports seeing an uptick in small business closures over the past six to nine months. “It’s not just the rent.”

Bronx Chamber of Commerce president Lisa Sorin notes that the increase has hurt small businesses the most, while Manhattan employers and their customers can afford to pay more to compensate. “It’s almost like a whirlwind of keep up or get out,” she said.

This dynamic was reflected in a Gothamist survey, which revealed that NYC restaurants are ‘thriving’ amid the $15 minimum wage, but acknowledges “Nearly 50 percent of respondents to the Hospitality Alliance’s survey said they would have to eliminate jobs in 2019 to make do.” CLICK for complete article

Bank of America announced a 4 percent drop in net income for the final quarter of 2019, while that of Goldman Sachs fell by 24 percent.

Investors, meanwhile, are eyeing numbers closely as the financial reporting season comes into full swing and income growth of firms listed on the S&P 500 in previous quarters has remained flat.

Stock markets have performed well despite near-zero corporate earnings growth, with many investors anticipating a turnaround in profits in 2020 as global growth stabilizes and trade tensions diffuse.

“The market rally indicates that investors expect higher earnings growth again in 2020,” Alexander Voigt, Founder and CEO at daytradingz.com, told The Epoch Times in an email. “The China trade deal and presidential elections are the main influential factors. I expect a stronger outlook during the current earnings release period and a subsequent higher earnings growth for 1Q20 and 2Q20,” he added.