Canadian race car driver Josh Cartu strikes a glamorous posture on social media: surrounded by expensive sports cars, hobnobbing with movie stars and fashion models, and travelling on his private jet to European party hotspots such as Ibiza and Cannes.

Cartu, who grew up in St. Catharines, Ont., boasts more than 700,000 followers on an Instagram account (@jcartu) that documents his exploits racing Ferraris, attending Milan Fashion Week and taking a ride in a Russian MiG fighter jet to the edge of the stratosphere.

Among those following closely are securities regulators in Ontario and the United States, who accuse Cartu and his two younger brothers of enriching themselves through an illegal online stock trading scheme run from an office in Israel.

U.S. officials allege the Cartus ran a “massive fraudulent” trading operation between 2013 and 2017 that appears to have helped fund Cartu’s lavish lifestyle through multi-million-dollar transfers to off-shore bank accounts in the Caribbean…read more.

Coming Up on This Week’s Show

Natural gas prices in Europe jumped 40% IN ONE DAY! Mike, Josef Schachter and Victor Adair all weigh in on what it means for investors and the global economy. And what are the ramifications of Facebook, Instagram and WhatsApp crashing on Monday – beyond the stock price plunging. Plus an important quote of the week, shocking stat, aaaaaaaaand The Goofy!
All starting right here at 8:30am Saturday October 9th.

Not to be Missed – Martin Armstrong this Saturday!

“Listen to the free online and podcast-only MoneyTalks show Saturday mornings at 8:30am pacific or whenever it works for your schedule. Listen on our website or via our podcast feed. You can also listen and subscribe to Mike’s YouTube channel.”

In a statement released late Wednesday through his Save America PAC, Trump slammed Bush and his longtime political adviser Karl Rove for endorsing “warmongering and very low polling, Liz Cheney.”

“Bush is the one who got us into the quicksand of the Middle East and, after spending trillions of dollars and killing nearly a million people, the Middle East was left in worse shape after 21 years than it was when he started his stupidity,” Trump said.

He added that the conflict “ended with Biden’s most embarrassing in history withdrawal from Afghanistan.”…read more. 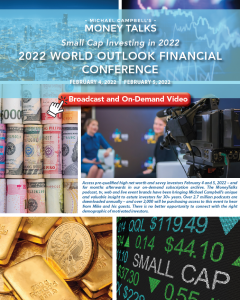