Canada’s Heavy Immigration Is The Last Pillar Preventing A Recession

Canada’s booming population growth is the only thing separating the country from a recession. There’s been a lot of talk about Canada’s massive growth in gross domestic product (GDP). There’s also been a lot of talk about Canada’s population boom, driven largely by immigration. However, few people seem to be discussing what the combination of the two means. When looking at GDP per capita (i.e. in the context of population), growth is falling at a rapid pace. In fact, lower growth has only typically been observed around recessions.

The term is simple enough to figure out, but the reason it’s more important than a straight GDP read is less obvious. Gross domestic product (GDP) is a measure of a country’s aggregate economic output. That is, a measure of the total value of goods and services created/provided in a country. GDP per capita is the value of those goods and services, divided by the number of people. By just dividing GDP by the population, you get a much better view of the numbers.

A country may have large economic growth, but it doesn’t mean a whole lot if the population is growing faster. By itself, GDP is the world leader equivalent of a d*ck measuring contest. The primary benefit is being able to compare your economy to another. If GDP per capita is falling though, it means your population may be suffering from an eroded standard of living. Now what do you care more about? That your economy is bigger than a country you’ve never been to? Or whether you and your neighbour are seeing the benefits of economic growth?…CLICK for complete article

Canadian Homeowners Have Extracted Hundreds Of Billions In Equity

The Christopher Columbus of central banks has discovered what everyone knows – Canadians are burning equity. A LOT of it. Bank of Canada (BoC) staff have concluded homeowners are extracting a lot of home equity. Consumption and the economy are boosted by the home equity extracted. However, the more significant the sum extracted, the more vulnerable the economy becomes to a housing correction.

The withdrawal of home equity tells us a lot, but today we’re focusing on the collateral effect. This is when people extract home equity to spend, as home prices rise. What’s the point of being a multi-millionaire bungalow owner, if you can’t have a few toys – right? This spending helps to propel the economy. It’s a twofer – home prices rise and the economy gets a boost. Score!

BoC researchers warn, this is a problem if the collateral effect contributes meaningfully. If home prices fall, the equity-based spending disappears. Combine that with slower sales, which leads to lower spin-off economic activity. A decline in home prices is no longer just a hit to paper-based wealth. It has a significant impact on the general economy, and employment. Oxford Economists have been discussing the collateral effect’s role in the US and UK, since the Great Recession….CLICK for complete article

Vision Capital makes money in real estate stocks when they go up AND when they go down. Since it’s inception in 2008 they’ve realized over a 335% gain.

Join co-founder, Jeff Olin, this Saturday on MoneyTalks – 8:30 Pacific , 9:30 Mountain to find out where he thinks the money’s to be made now.

Canadian Mortgages Are Now So Large, The Benefit Of Low Rates Is Minimal

Canadian households are sending a lot more cash to lenders, but it’s not paying their debt down. Statistics Canada (StatCan) data shows household mortgage payments jumped in Q2 2019. Rising payments are seeing fewer dollars pay off debt, and more towards carrying it.

Canadians Paid Over $93 Billion On Mortgages

Canadian real estate owners paid a new record amount for mortgage debt. Over $93.15 billion in payments were made towards mortgage debt in Q2 2019, up 1.85% from the previous quarter. Compared to the same month last year, this number is 7.70% higher. The dollar amount dedicated has never been higher, but that’s not all that surprising. The surprising part is fewer dollars are going towards paying down the actual debt….CLICK for complete article

Canadian Reverse Mortgage Debt Is Up Over 26% From Last Year

Canadian seniors are slowing down on the equity binge, but they’re still tapping quite a bit. Office of the Superintendent of Financial Institutions (OSFI) filings show reverse mortgage debt reached a new high in June. Canadian reverse mortgage debt is decelerating in growth, but is still one of the fastest growing segments of debt.

A reverse mortgage is an increasingly popular way for seniors to tap their home equity. Lenders will give you a lump sum or regular payments, secured by the equity in your home. They’re similar to a home equity line of credit (HELOC), but no regular payments are not required. Instead, the balance is only generally due in the event of death, sale, or default.

For this privilege, they generally charge a higher fee than a HELOC. Combining no payments and a higher interest rate is a great way to see your home equity vaporize. So it’s always best to thoroughly think a move like this through. Got it? On to the data….CLICK for complete article

Buyers are Off the Benches and in the Purchasing Game, Thanks to Stress Test Mitigation

The stress test was introduced in 2018  and basically cut any potential buyers purchasing power by 20%. Buyers needed to qualify at higher rates and terms than were ever required before. That sent a significant segment of the market to the sidelines. 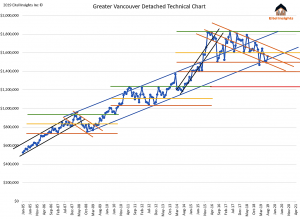 Now that the market has dropped off, there is a portion of those sidelined buyers that are off the bench and in the purchasing game.  During August prices rose back to $1.560 Million, which is perfectly in the middle of the market downtrend that has been established. Equally important the market has jumped back above the ten year uptrend after two months of threatening to break the important technical indicator.

We at Eitel Insights believe sellers should take advantage of this temporary market. We have been stating for the last quarter that this stress test mitigation would come, now that it is in play, we feel obligated to warn that this is a blip in the markets evolution lower. Before you know it the average sales prices will officially break the ten year uptrend and the market will be sent lower with a significant test of $1.400 million likely in 2020. 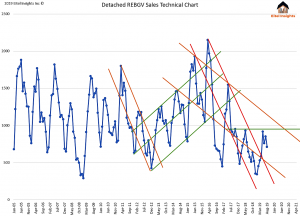 The Detached sales figures which had broken out of the falling knife trend. Is now, seemingly in a triple top scenario with sales not being able to climb above 920 sales with any sustainability. This will be a short term problem as sales can indeed increase from their very low levels and still be in the overall downtrend. We do anticipate seeing higher lows in the sales numbers and it is not hard to imagine higher lows being put in place considering all the market needs to realize is more than 344 sales to achieve the goal in place. However as we say the market needs to have a heartbeat. Just because there are sales does not give you the whole story of supply versus demand. 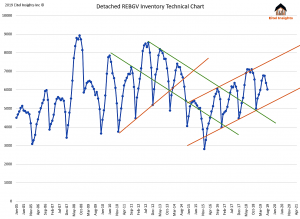 The inventory growth has curtailed as of late, with properties staying on the market longer and some sellers giving up hope and taking properties off the market. The new activity brought on by the stress test mitigation will cause another increase in inventory over the next couple of months. As old sellers hop back on the bandwagon believing the market has turned. This will again cause a further imbalance between buyers and sellers. Once the sidelined buyers have purchased there is no pent up demand following them and prices will indeed head lower while inventory grows.

Money save is money earned. Since our initial forecast that the Greater Vancouver Market had indeed topped out and prices would begin to trend lower. The market has realized a $360,000 price loss. For an individual report please visit www.eitelinsights.com.