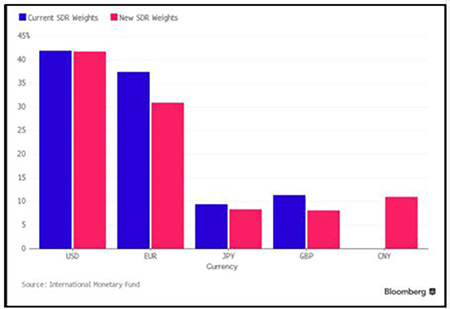 Yet, the U.S. dollar still reigns supreme and continues to appreciate in value.

So much for all the pundits calling for the death of the dollar when the yuan gained official reserve status!

So what does it all mean? Will the yuan eventually kill the dollar?

I’ll answer those two questions with one simple reply: There is — in no uncertain terms — no way the dollar will ever be overthrown by the Chinese yuan, or any other currency for that matter.

In fact, per Bloomberg and according to the IMF itself, the new official reserve basket will have the composition you see in the bar chart here. As you can clearly see, the euro, yen and the pound will be impacted the most, not the U.S. dollar.

A tiny decline of just 0.17%. How is that ever going to destroy the dollar?!

The IMF yuan decision is just a symbolic move
to recognize the rising status of China.

That’s all it is. Period. Even when it comes into effect 10 months from now, it won’t make a dent in the dollar. It can’t. In order to have a major impact, China must also have a major, multi-trillion-dollar equivalent international sovereign bond market — so investors, including countries who want to hold yuan in reserves — can earn some interest.

But China does NOT have a deep, international sovereign debt market. So it’s unlikely any major institutions, governments and central banks included, would want to park much money in the yuan.

On top of that, the yuan accounts for a mere 2% of global payments and foreign exchange transactions …

Compared to the U.S. dollar’s 45% share of payments and 87% of foreign exchange transactions.

Instead, it is far more likely that
the biggest loser will be the euro.

That should be clear to anyone who has even the slightest awareness of what is happening to the global economy.

It’s simple: While the U.S. economy is muddling through, Europe — the region with the second largest share of the reserve currency basket, the euro — is crashing and burning.

So who in their right mind — individual investor, financial institution, government or central bank —

Would want to keep money in the euro, or for that matter, switch from the euro to a still unproven, new reserve currency whose shares of global transactions and trade is a mere 2%?! Not going to happen. Bottom line: The euro is likely to suffer the most from the yuan becoming a reserve currency … while the U.S. dollar overall will still remain king of the hill.

That’s a no-brainer when you think it through and ignore all the fear-mongering out there about the dollar dying someday.

Hence, for now and for the foreseeable future as deflation retains the upper hand on the global economy, STAY in U.S. DOLLARS … and do NOT buy the hype that the dollar is going to crash and burn.

That time will come, but it will not be because of the yuan or anything else. It will most likely come in late 2017 heading into 2020 …

As investors all over the world begin to question the credit worthiness of Washington, after the government debts of Europe and Japan collapse first.

Lastly, I want you to still keep your eyes glued on gold and silver. A wee bit of a rally here is all that is needed to set the precious metals up for one more new leg to the downside and potential major lows …

From which a major new rally should begin.

P.S. Are you wondering where the greatest growth opportunities could be today?

My new report has the answers you’re looking for.

Click this link to read your free copy now.