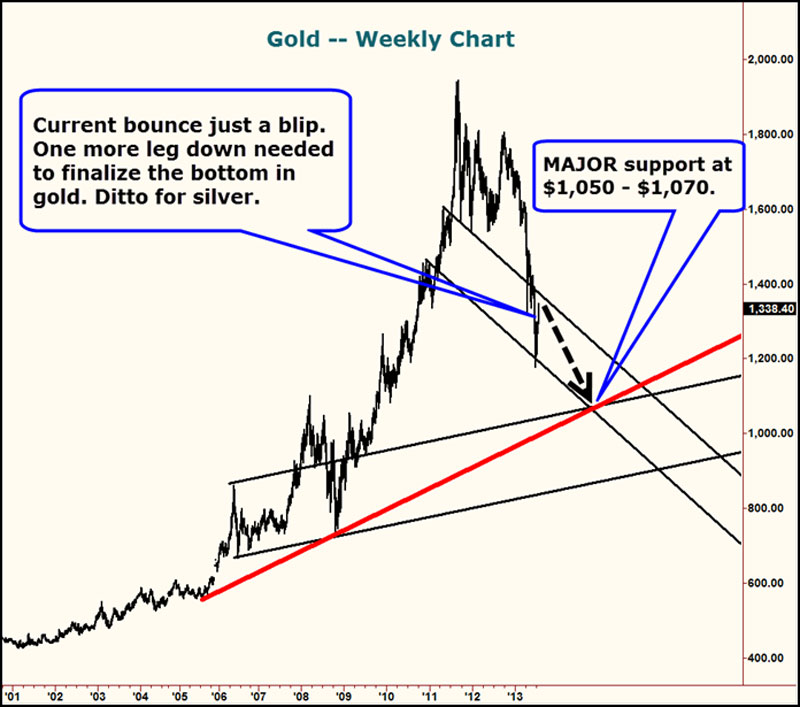 I’m getting so many questions from readers that I’ve decided to devote this week’s column to answering the most important ones. So let’s get started.

Q: Larry, you were right as rain about gold. It crashed this year and came close to one of your targets at the end of June. Is the bottom here yet?

A: It’s too soon to say. But referring to the chart I presented last week, repeated here, as I had forewarned then, gold and silver should head lower almost And indeed, the latest rally early last week has failed, and now both gold and silver are moving lower again.

If silver closes below $18.51 — highly likely based on my trading models — then new lows will be seen in that metal as well.

In short, neither metal is out of the woods yet, but they are making some good headway at establishing what should prove to be major lows out of which the next leg up will begin.

Q: Why isn’t inflation a big problem now? Everyone is expecting it, and the world’s central banks have certainly printed trillions of dollars of paper money.

A: As I’ve said all along, printing money by itself is not inflationary if the majority of investors and consumers don’t want to spend or borrow money. That’s been the case for years now as consumers, investors and businesses — the private sector — all retrench.

That’s evidence that confidence in government is now declining. As that progresses, inflation will indeed tick higher and all the central bank money printing that’s been going on will finally come home to roost.

That said, inflation is coming. It’s right around the corner. But do not bet on hyperinflation in the U.S. That’s not going to happen. Our bond markets are too big and too deeply liquid and our economy too large for it to experience Weimar- or Zimbabwe-like inflation. Anyone telling you otherwise does not know what they are talking about or they are simply out to scare you.

Q: Where do your war cycles stand?

A: Precisely as forecast, they are ramping up big time. You can see it all over the world, in Egypt, in Asia between China and Japan, in social unrest in Europe, and in the latest news that a record 83 percent of Americans polled are dissatisfied with Congress. That, plus the National Security Agency (NSA) spying on all Americans, is soon going to lead to massive social unrest in this country.

The war cycles point up all the way into 2021, so fasten your seatbelts.

A: Absolutely. There is no doubt in my mind we will see the Dow move to at least 21,000 by 2016, and probably much higher. And not despite turmoil in the world, but because of it. The Dow and other blue-chip-type stocks can and often do act just like gold, as a safe haven for capital and as an inflation hedge.

But the Dow has not yet completely broken out to the upside. A sharp, swift correction is overdue. When that comes, I will be giving the signal to back up the truck for stocks. But not until then.

Q: JPMorgan was fined for manipulating the energy market. Are such manipulations routine, and are they present in gold and silver?

A: Yes, it is routine. The big investment bankers are always attempting to manipulate markets. But here’s the important point: Manipulations never, ever change the destiny of the markets. They don’t change the trend, and they certainly cannot reverse major trends. All they do is increase volatility.

So don’t buy into the excuses, for instance, that if it weren’t for some manipulation, gold or silver would never have crashed this year. That’s pure baloney put out by inexperienced traders and analysts, and by dealers who want to blame some outside force to get you to believe that gold and silver’s decline isn’t real, and that if you simply dive into the markets you’ll make money.

Those people — and there are a lot of them —are just trying to line their pockets with fat dealer premiums and commissions, and at your expense.

Q: Comex gold inventories are at or near record lows. Isn’t that bullish for gold?

A: Not necessarily. Think about it. Suppose you own gold at a Comex warehouse and you simply want to store it somewhere else. So you take your gold out and ship it to a private vault in Switzerland. The Comex inventories go down, yet your gold isn’t going back on the market. There’s no net change. Or, suppose you’re a jewelry manufacturer and you take delivery of your Comex gold to produce and sell more jewelry. Comex inventory goes down, and your metal ends up on the market as supply, though in fabricated form.

In both cases, Comex inventories go down. In the first, there’s no net change overall in the supply of gold. In the latter, inventories are down but available supplies are up. They offset each other.

Bottom line: The fact that official Comex inventories may be extremely low means nothing. You have to analyze what’s happened to the metal to make the final determination as to whether it’s bullish, bearish or a net nothing.

This is similar to the manipulation discussion above, in the sense that way too many supposedly impartial analysts use low Comex inventories to conjure up a nice logical-sounding sales pitch.

But in reality, they haven’t done their homework, they’ve only looked at half the evidence — and usually their motive is, again, nothing more than to generate a nice commission off you by getting you to buy at almost always the wrong times and prices, and for the wrong reasons.

Q: Some time ago when Germany decided to remove its gold from the New York Federal Reserve’s vaults and start shipping it back home, you said it was bearish for gold. Everyone thought you were nuts. But I just read that Germany sold 25,000 ounces of its gold. Is that a sign of things to come, central bank gold sales?

A: Yes, I believe it is. Look, no matter what you hear, Western central banks have no use for gold and, instead, want to make it obsolete. They want to move the world to an electronic currency that can be fully tracked, traced and taxed.

So to them, gold is a dinosaur that needs to be put in the past, just like they did with silver in the 1960s.

But importantly, that does not mean gold will go down. It would be more like the period from 1978 to 1980 in the U.S. when our Treasury dumped millions of ounces of gold on the market, and yet gold prices soared.

Why? Because when central banks dump gold for cash, it’s a surefire sign that all is not well with government finances. Investors, always smarter than governments, move in and start buying up what the central banks are forced to dump.

That’s it for now. Stay tuned — my models are showing that this month and next will be pivotal for almost all markets, leading to major trends unfolding and a slew of new profit opportunities.