Your Best Strategy for Playing This QE Rally 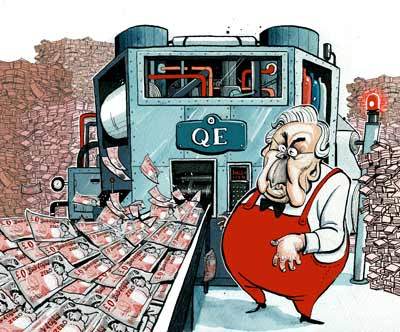 Don’t worry. The bubble “Quantitative Easing” has built is still intact. For now.

However, even though there’s breathing room, don’t think it’s time to breathe easy. There will be Hell to pay, just not now.

And I have found three opportunities to take advantage of the next phase in this unsettling market.

But let’s gather some perspective first.

The news that the Fed might taper QE bond purchases gave the bond (and stock) markets a fit of the vapors and caused gold to careen toward $1,200 an ounce. But when the smoke cleared, the market took a deep breath and realized that the Fed would reduce its stimulus very slowly, while other central banks were still pumping out the money.

In that environment, while bonds and gold may hiccup, we can count on a further extension of the 2009-13 QE bubble.

Given the Fed’s leisurely timetable, the real crash will wait till the second half of 2014.

The elephant in the room: money supply is way out of balance with the real economy. The monetary base rose 21.8% in the year to June 26, bank reserves rose 29%, the St. Louis’s Fed’s Money of Zero Maturity rose 7.7% and M2 money supply rose 6.9%.

All those are much higher than the roughly 4% increase in nominal GDP in the year to June. Monetary policy is very stimulative, and the narrower the definition of money supply, the more stimulative it is.

Interestingly, one effect of the recent uptick in long-term interest rates may be to boost inflation. Banks are holding over $2 trillion of excess reserves at the Fed, on which the Fed is paying them 0.25% interest.

Before 2008, the Fed didn’t pay interest, so banks rushed to lend the excess reserves in the interbank market or to customers. However if long-term rates and especially 2-3 year rates rise far above the 0.25% the Fed is paying the banks, they will lend out these reserves.

That will stimulate the economy (good) but increase both the economy’s debt (bad) and its inflation rate (also bad!).

Of course, the Fed could raise the rate it pays on reserves above 0.25%, but it’s very unlikely to do so while it’s attempting to provide “stimulus” by buying $85 billion a month of Treasury and Agency securities. Naturally, if inflation rises, real interest rates fall, bond market yields rise and gold shoots up.

In any case, the Fed isn’t the only player in this game. Mark Carney has just become Governor of the Bank of England, and the British public is waiting for him to stimulate their feeble economy, which is still well below its 2008 level, with productivity shrinking.

Maybe he will have some new idea, but the chances are his stimulus will involve some kind of new money printing.

Then there’s Japan. Prime Minister Shinzo Abe and his central bank chief Haruhiko Kuroda have pinned their reputations on the “Abenomics” policy of printing money. It’s boosted the stock market and it seems to have helped the Japanese economy, which rose at 4% in the first quarter.

They can’t afford for it to fail for lack of money printing, whereas they can afford a takeoff in inflation – it would solve the Japanese government’s debt problem as it did in Britain in 1945-75.

So they’re buying more bonds than the Fed, in an economy one-third the size, and will increase their purchases rather than scale them back. That means the Japanese stock market will boom, as will the Japanese economy, at least before inflation arrives — which it will.

There will be more scares in the Treasury market, as it panics about “tapering” or the appearance of inflation. But until Treasury bonds yield much more than inflation, they will have little effect.

What’s more, most of the time the Fed’s purchases will cause yields to decline again after every rise. That’s very artificial, but the price for distorting the market won’t be paid yet.

What To Do Now

How long will this last? I’d say there will be no increases in interest rates before at least 2015; stock and asset markets will continue to climb until then.

In the meantime, U.S. stocks are fairly high while gold and other commodities have been through a major down cycle.

All that said, the ways to play this cycle are:

1. Tokyo. Wisdom Tree Japan Hedged Equity ETF (NYSE:DXJ) gives you exposure to the Japanese stock market while neutralizing the risk of a major crash of the yen against the dollar, which could happen if Abe and Kuroda get over-enthusiastic.

2. Gold. Sprott Physical Gold Trust ETV (NYSE:PHYS). This trust, unlike the better known GLD, allocates physical bullion in a warehouse for your holding. Hence it avoids any possibility of shenanigans with GLD’s physical gold holdings.

3. Commodities mining companies, which are extremely undervalued. To get a solid company with a broad exposure, you should look at FreeportMcMoran Copper & Gold (NYSE:FCX), which is a major miner of copper, gold and now domestic oil, which is trading at 9.2 times trailing earnings with a nice dividend yield of 4.5%.