You Can’t Shoot Fish in a Barrel Without Ammunition 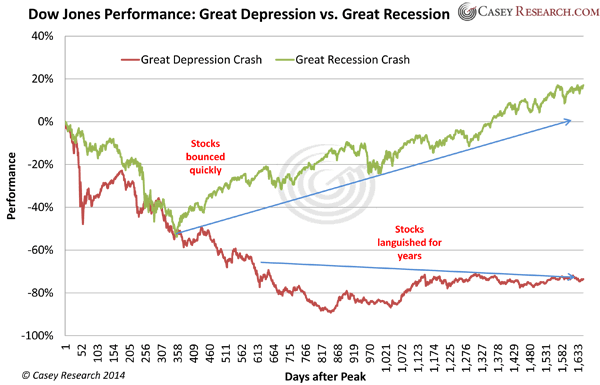 I heard this acronym on a podcast last week. Having no clue what it meant, I consulted Google.

Turns out it stands for “Fear of Missing Out.” Kids use it to describe their anxiety about missing a social event that all of their friends are attending.

It struck me that investors experience FOMO too. And it usually leads to bad decisions

From Prudent to FOMO

In the comfort of your home office, investing rationally is pretty easy. You think a bull market might be emerging, so you invest in the S&P 500.

But you’re not stupid. No one really knows where the stock market is headed, so you keep a healthy allocation of cash on the side to deploy the next time stocks trade at bargain prices. A prudent, rational plan.

But leave the house and things start to change. You notice that others seem to be making more money than you. First it’s the “smart money” raking in the dough — those who had the foresight and fortitude to buy during the last panic, when everyone else was retreating. You’re OK with that. Investing is their full-time job. You can’t expect to compete with them.

But as the bull market charges higher, the caliber of people making more money than you sinks lower. The mailman starts giving you stock tips. And your gardener’s brand-new Mustang, parked in your driveway just behind your sensible, 2011 Toyota Corolla, starts to irritate you.

Your brother-in-law is the last straw. He thinks he’s so smart, but he’s really just lucky to somehow always be in the right place at the right time. I mean, just last month you had to pick him up from a NASCAR tailgate after security kicked him out for lewd behavior — and now he’s taking the family to Europe with his stock market winnings?

If that guy can make $30,000 in the market in six months, you should be a millionaire.

Some quick extrapolation shows that if you invest all of your cash right now, you can retire by 2023. Factor in a couple family trips to Europe, and we’ll call it 2024 to be safe.

Cash Is Trash… Until It’s King

Such is the (slightly exaggerated) psychology of a bull market. FOMO is a powerful motivator and causes smart investors to do stupid things, like go all-in at the worst possible moment. Which is no small concern, since it undermines one of the most powerful investment strategies: keeping liquid cash in reserve to invest during market panics.

Take the roaring ’20s as a long-ago but pertinent example. The surging stock market of that era caused a whole lot of FOMO. Seeing their friends get rich, people who had never invested before piled into stocks.

Of course, we know how that ended.

But there’s a fascinating angle that you may not have given much thought. I hadn’t until yesterday, when I finished reading The Great Depression: A Diary. It’s a firsthand, anecdotal account written by attorney Benjamin Roth.

Roth emphasized that during the Great Depression, everyone knew financial assets were great bargains. The problem was hardly anyone had cash to take advantage of them.

Here are a few quotes from the book:

August 1931: I see now how very important it is for the professional man to build up a surplus in normal times. A surplus capital of $2,500 wisely invested during the depression might have meant financial security for the rest of his life. Without it he is at the mercy of the economic winds.

December 1931: It is generally believed that good stocks and bonds can now be bought at very attractive prices. The difficulty is that nobody has the cash to buy.

September 1932: I believe it can be truly said that the man who has money during this depression to invest in the highest grade investment stocks and can hold on for 2 or 3 years will be the rich man of 1935.

June 1933: I am afraid the opportunity to buy a fortune in stocks at about 10¢ on the dollar is past and so far I have been unable to take advantage of it.

July 1933: Again and again during this depression it is driven home to me that opportunity is a stern goddess who passes up those who are unprepared with liquid capital.

May 1937: The greatest chance in a lifetime to build a fortune has gone and will probably not come again soon. Very few people had any surplus to invest — it was a matter of earning enough to buy the necessaries of life.

In short, by succumbing to FOMO and investing all your cash, you might be giving up the opportunity to make a literal fortune. You can’t shoot fish in a barrel without ammunition.

Of course, the parallels from the Great Depression to present-day crises aren’t exact. The US was on the gold standard back then, meaning the Fed couldn’t conjure money out of thin air to reflate stock prices. Such a nationwide shortage of cash is unthinkable today, as Yellen & Friends would create however many dollars necessary to prevent stocks from plummeting 90%, as they did during the Great Depression.

That’s exactly what happened during the 2008 financial crisis, as you can see below. The Fed injected liquidity, and stocks rebounded rapidly. Compared to the Great Depression, the stock market crash of 2008 was short and sweet: What does that mean for modern investors?

When the next crisis comes — and it will — there will be bargains. But because of the Fed’s quick trigger, investors will have to act decisively to get a piece of them.

What’s more, now that the US government has demonstrated beyond the shadow of a doubt that it will prop up the economy, bargains should dissipate even quicker next time around. After all, the hardest part of buying stocks in a crisis is overcoming fear. But that fear isn’t much of a detriment when Uncle Sam is standing by with his hand on the lever of the money-printing machine, ready to rescue the market.

Crises can creep up on you faster than you think. You may never know what hit you–unless you knew what to look for ahead of time. Watch Meltdown America, the eye-opening 30-minute documentary on how to recognize (and survive) an economic crisis — with top experts including Sovereign Society Director Jeff Opdyke, investing legend Doug Casey, and Canadian National Security Council member Dr. Andre Gerolymatos.

Be prepared… it can (and will) happen here. Click here to watch Meltdown America