Yet Another Key Uranium Mine Gone 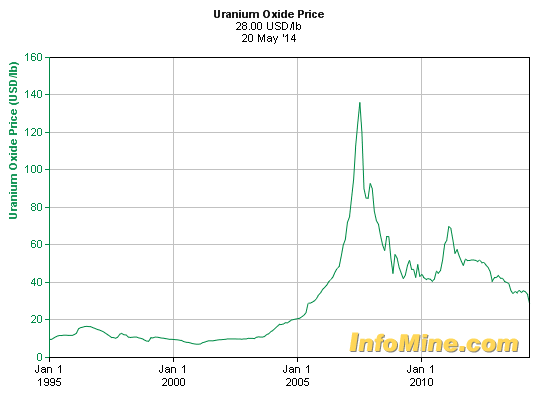 The news on uranium mine closures seems to be coming regularly now.

Last week, I wrote about major producer Cameco delaying its Millennium mine in Saskatchewan. And this week we got news of another high-profile producer that’s being lost to the market.

That’s the Imouraren mine in Niger. Being developed by French nuclear major Areva.

Imouraren had been scheduled to open this year, alongside Areva’s two existing mines in Niger. But sources in Niger’s mining ministry were quoted as saying that development of the project will now be suspended–as part of a new production agreement Areva is signing in the country.

Once again, the reason for the deferral is reportedly simple economics. With Reuters noting that Imouraren won’t proceed “until uranium prices improve.”

This is another significant loss for global uranium supply. The Imouraren mine had been slated to be a sizeable one–with a total resource of more than 100 million pounds. Production capacity had been announced at over 11 million pounds of uranium yearly.

None of that will now see the light of day. At least not for the foreseeable future.

It’s possible that some of the delay is a result of politics. With Areva lately having been locking in a disagreement with Niger’s government about fiscal terms for uranium production in the country.

But it’s also completely plausible the delay is simply a matter of low prices. Fitting with the pattern we’ve seen lately of almost every major uranium development globally being shelved. From Canada to Africa to Kazakhstan, there just doesn’t seem to be any appetite for new projects in current market environment.

That’s not surprising at today’s prices. Which see uranium oxide sitting at an ultra-low $28 per pound on the spot market. Few producers new or old are making money at these rates. We’ll see how long supply can hold out if mining developments keep disappearing.

Here’s to a shrinking market,