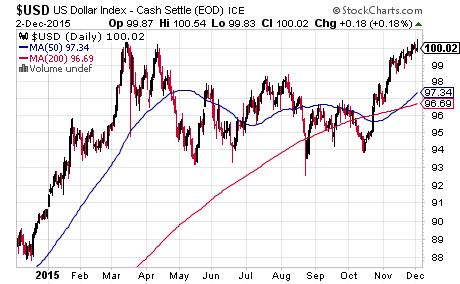 Over to you, Draghi and Yellen.

This month, like many other months recently it’s the intentions of central bankers that are dominating the markets.   It’s widely expected that the ECB and US Fed will drift even further apart in their basic policy stances this month.   I’m pretty sure that view will turn out to be correct though as always the devil will be in the details.

Increasing certainty about upcoming policy moves has traders increasingly certain about how different markets will move and they are placing bets accordingly.   Traders in New York are expecting Santa to deliver new all-time highs.   He may grant that wish on momentum alone but if we get many more sub-par economic readings the jolly old elf may decide to break out the coal lumps to stuff stockings with.

Traders are behaving with even more certainty, alas, in the gold market.  It’s been all short gold and long dollar since the middle of October. There has been no respite yet.  I continue to believe we may in fact get some if the Fed raises rates as expected.  The key word here is “expected”. This has to be the most anticipated, front run and telegraphed interest rate change in history.   It’s hard to believe that anyone interested in trading the outcome hasn’t placed their bets already.   That being the case there is still potential for a sell (dollars) buy (gold) on news trade the market is not expecting.

A lot of things are going to happen in the next two or three weeks that could set the stage for the entire 2016 market and determine if 2015 is a winning or losing year for the big board.

The combination of decision makers at the ECB and US Fed this month loom largest for near term market direction for both equities and currencies.  The monthly payroll report and the latest decision by OPEC on cutting (or not) oil production will also impact.  Some of this will be coming at you immediately after you read this editorial.  The Fed meeting, arguably the most important data point is furthest away but only two weeks out.

We’ll start with an updated US Dollar chart since its value is a distillation of trader’s beliefs about central bank intentions and relative strength of different economic blocks, the US and Europe in particular.

As you can see from the chart below the USD continues to strengthen, though less than the dollar bulls expected so far.  The index has been unable to break through the spring high.  I find this interesting as the Euro has weakened and conviction about a Fed rate increase continues to grow.  I’ve noted before how one-sided the dollar trade is and, if anything, it’s even more crowded now. You can see the impact of the surging dollar in the gold chart below.  Gold is hitting new lows and trading

around the upper range of the target I had for longer term bottom.  Charts for many other metals and other commodities look similar.  For gold to make that bottom the USD has to stall out and preferably reverse and start heading lower.

Virtually everyone expects the Dollar to continue powering higher as the Fed starts raising rates.  I’m in a very small minority (a minority of one as far as I can tell) that believes a rate increase may mark at least an interim top in the dollar.

Why?  Several reasons.  The first and simplest is how one sided the trade is.  Currency traders trade charts.  Chart patterns are the reason for the 120 target and I agree that target looks “logical”.  That said, the main reason longs keep piling on is the upcoming Fed decision.  Once that decision is announced traders will have to decide whether to “sell on news” and take profits.  I expect many to do just that. The Fed made a mistake not raising rates almost two years ago. They know it.  They also know that there is virtually no inflation in sight and they are starting a tightening round very late in the economic cycle.

I do think rates get raised this month but I think the FOMC will go to extraordinary lengths to convince the market the pace of increases will be VERY slow.  For all the outward bullishness the markets are shaky and growth is slow.  The Fed can’t afford to spook traders now. If the Fed succeeds in soft peddling this increase the odds of currency traders locking in profits increases.

A second factor that could cap the dollar is the ECB.  Its meeting comes first.  Like everyone else I expect Mario Draghi to be dovish, the question is how dovish.  He has reason to be lax.  Deflation continues to stalk the Eurozone and bond yields are getting increasingly negative.  The rate differential has decimated the Euro and Draghi is totally fine with that.  The cheaper currency has been a boon for exports.  PMI, employment and production levels have all been better than expected.

Draghi has every reason to cut rates and expand QE as he hinted he would do. The market expects it and is pricing it in.  Now he has to live up to expectations.  He might meet or beat them but remember that there are ECB board members that are inflation hawks and hate the idea of QE.  There will be pressure to temper Draghi’s enthusiasm even though he’s been right and QE is definitely helping economy.

I don’t pretend to be privy to the internal decision making of the ECB board.  Maybe the markets are right but there is a realistic chance the ECB does less than expected given how high those expectations are.  If that happens the Euro gets a boost and the dollar a haircut.

The third and perhaps most important reason is also one I have touched on before.  The strong dollar is doing a lot of damage to corporate profits and the wider economy.  The chart below comes from a presentation given by none other than Stanley Fischer, vice-chair of the Fed.  He’s an inflation hawk and has been pretty consistent in his calls for higher rates. The impact is not small. A 10% currency move can cut GDP growth by 1.5%.  The move in the USD so far has been about 15% and plenty of currency traders expect another 15% plus going forward.  That implies a decrease in GDP growth of up to 3% from an economy that wasn’t booming to begin with.  Perhaps this explains why the US economy has been decelerating this year and not hitting the “liftoff” Wall St keeps expecting?

We’ve seen plenty of ongoing impacts lately.  Exports, manufacturing PMIs and spending numbers have all come in below consensus. You can see how those low readings are impacting the latest estimates for this quarter’s growth.  Like in Q3 the current GDPNow estimate is far below Wall St consensus.  The latest reading is a meagre 1.4%.  Keep in mind that this reading has been more accurate than Wall St consensus lately. So far this quarter consumer spending has been a big disappointment.  We just passed the Black Friday kick off to the holiday spending season.  Sales were way below estimates.  I don’t think any of this will dissuade the Fed.  If they blink again at this month’s meeting their credibility will be destroyed.  At the end of the day that credibility is the main source of the “moral suasion” a central bank exerts. The Fed can’t afford to lose that even if raising rates is dangerous.

Weak sales are leading to high inventory buildup and this is one of the first danger signs of a potential recession.  The chart below shows how much the inventory to sales ratio has expanding since mid-2014.  Unless consumer spending accelerates soon we’ll start seeing businesses cutting production to try and get this ratio back in line.

The big board indices are a couple of percent from their highs.  The “Santa Claus” rally is one of the most dependable and it may finally allow new highs to be reached.  Do not underestimate the dangers though.

Many market internals have continued to weaken and the economy has continued to slowly decelerate. Broader and equal weighted indices continue to struggle.  It’s still a small number of companies carrying the entire rally. The potential for a major top in the markets is as high as it was three or four months ago.  Optimism could still prevail but the next month or so will be tricky.

The bottom line is I agree with the consensus in terms of what will happen in the next two weeks but disagree on the impact it will have.  I think there is a good chance the dollar tops when the Fed lifts rates and the potential for a policy mistake overwhelming the market is high.

That backdrop could mark a final bottom for gold prices.  It won’t do base metals or other commodities as much good.  A falling dollar will help but in the absence of much better and broadly believed readings from China it will take mine closures to convince traders base metals are bottoming. Gold is in the danger zone. The central bank meetings could generate a spike lower, though we’re running out of sellers.  The positioning in the futures market is as bearish as it has ever been.  That’s scary but also a classic contrarian signal.  When the market is this bearish it’s due for a bounce.  Whether that is a bounce of the dead cat variety or the start of something more important will depend on the USD.  If I’m right about it topping out soon we should be set up for a rally in gold and gold stocks.  Stay vigilant. We could see some resolution to this endless bear run very soon.

Don’t forget to register for the next Metals Investor Forum which takes place on January 23rd in Vancouver.  The event features presentations by Brent Cook of Exploration Insights, Gwen Preston of Resource Maven and Yours Truly.  This catered event also includes presentations by a curated list of top companies chosen by the editors to tell you their stories and allow you to meet management one on one.

The attendee list is kept to a level that allows for meaningful interaction. That means that this event fills up.  Do not wait until the last minute to get tickets for you and yours.

Click Here to Register for the next Metals Investor Forum

The HRA–Journal and HRA-Special Delivery are independent publications produced and distributed by Stockwork Consulting Ltd, which is committed to providing timely and factual analysis of junior mining, resource, and other venture capital companies.  Companies are chosen on the basis of a speculative potential for significant upside gains resulting from asset-based expansion.  These are generally high-risk securities, and opinions contained herein are time and market sensitive.  No statement or expression of opinion, or any other matter herein, directly or indirectly, is an offer, solicitation or recommendation to buy or sell any securities mentioned.  While we believe all sources of information to be factual and reliable we in no way represent or guarantee the accuracy thereof, nor of the statements made herein.  We do not receive or request compensation in any form in order to feature companies in these publications.  We may, or may not, own securities and/or options to acquire securities of the companies mentioned herein. This document is protected by the copyright laws of Canada and the U.S. and may not be reproduced in any form for other than for personal use without the prior written consent of the publisher.  This document may be quoted, in context, provided proper credit is given.