Wouldn’t Buy a Bond with Your Money 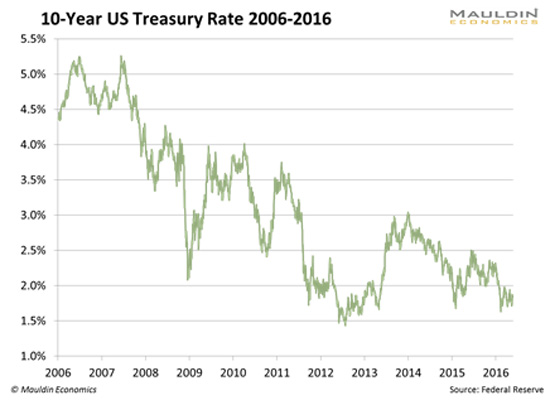 This one is going to cause some cognitive dissonance, because many of the people you trust and rely upon for financial insights are bullish on bonds and think that interest rates will go even lower.

I think they will go higher, and I have a fairly well-reasoned case. And going back a lot further than that: Let’s step through this bit by bit.

If you are a bondholder, what is your greatest enemy?

Think about it. If you own a 10-year piece of paper yielding 2% and inflation is running at 3%, you actually have a real yield of -1%. That doesn’t sound very good. As it stands right now, real interest rates in the 10-year space are just slightly above zero.

For those of you who have a little bit of background in this, interest rates have a nominal and a realcomponent. The nominal component compensates you for inflation. The real component reflects the supply and demand for loanable funds.

This is all academic. But the academic stuff works sometimes, too.

So here is a chart of inflation (CPI): You can see that it is starting to turn up. Yes, inflation is low, but it’s the direction that counts.

So why would you buy a bond when inflation is getting ready to ramp up?

Worse, there are plenty of indications that inflation is going to run further. 10 years ago, inflation was running about 3–4%, but people were saying that we didn’t really have inflation, because we didn’t have wage inflation.

Well, guess what: now we are starting to have wage inflation. People are very noisy about this with respect to the minimum wage, and by the way, after the last year or two, almost nobody pays the minimum wage of $7.25 an hour anymore. Walmart, TJ Maxx, and many others have all raised wages on the low end.

This feeds into expectations, where people come to expect more and more pay increases. And when people demand and receive pay increases, they have more disposable income and drive up the price of goods and services.

Leaving aside the anti-immigration stuff for a moment, I’m not a fan of Donald Trump. For one reason and one reason only: the debt.

A few weeks ago, in Forbes, I argued that a President Trump would be very bad for the bond market. Let’s talk this through.

Donald Trump wants to cut taxes. He wants to cut the top marginal rate from 39.6% to 25%, and all the other tax rates as well. He wants to make it so most people don’t pay taxes at all. The “cost” of this tax plan is about $1.3 trillion, but if we dynamically score this and say that there will be economic growth as a result of it and the government will take in more revenue (the supply-side argument, which I agree with), let’s just assume it’s a trillion-dollar tax cut.

Let’s say that on the expense side, this costs an additional $1 trillion (Trump is not a small-government conservative).

So the deficit, which is currently at about a half-trillion, goes to $2.5 trillion, or about 15% of GDP, the highest in history.

The debt is little more than an abstraction to most people, but the mechanics of what happens when a government runs a large deficit is that the treasury will increase the size of its bond offerings. So if the US Treasury is offering $20 billion of bonds every quarter, and the deficit doubles, it will be offering $40 billion of bonds every quarter. There’s an increase of supply, and without a corresponding increase in demand, investors will demand price concessions and interest rates will rise.

This is the argument Robert Rubin was making about the debt in the 1990s. And he was right.

Under a Trump regime, the volume of bonds that would be offered for sale would skyrocket. Never mind Trump’s creditworthiness in general, and the fact that he’s made an entire career of screwing creditors. I would not want to lend money to the US government under such circumstances.

Under Hillary Clinton, the situation would be better, but only marginally, because over time, our entitlement programs will grow more and more expensive (and untenable).

I have about eight other bullet points to make, but I try to keep The 10th Man succinct. Let’s be clear—the bond market is as overpriced as it has ever been, right at the moment that the fundamentals have completely broken down.

Where does the exposure live? With you, the retail investor.

There are hundreds of billions in household assets in fixed-income mutual funds, retirement and nonretirement. After a 1% rise in interest rates, people will discover what the meaning of “duration” is.

But that is a topic for another time.

related from Larry Edelson: “Something Has Radically Changed”