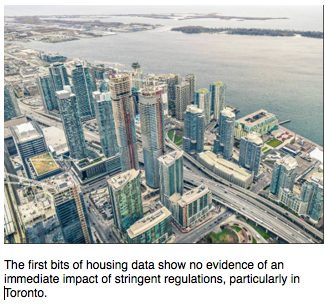 In 2006, in the middle of one the hottest years on record for Canadian housing, then Bank of Canada Governor David Dodge sent a testy letter to his counterpart at the country’s mortgage insurer warning about lax standards fueling demand for homes. Today, Dodge has new words of caution: worry more about supply.

“It’s not very complicated: there’s a supply curve, there’s a demand curve. If you restrict that supply curve then don’t be surprised by high prices,” said Dodge, who over four decades as a public servant worked at the Canada Mortgage and Housing Corp. and headed both Canada’s finance department and its central bank.

While Finance Minister Bill Morneau’s recent measures to cool Canadian housing markets are only the latest in a decade-long effort to stem demand, beginning with Dodge’s letter, they have also begun to reveal something else: the federal government’s waning ability to solve the problem.

Real-estate reform: What you need to know about Ottawa’s overhaul