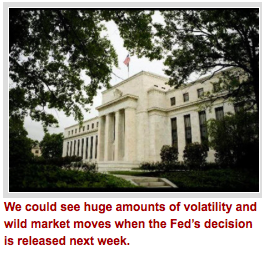 I’ve seen a lot of Federal Reserve meetings come and go in the 18 years I’ve been closely following the interest-rate markets. But few have been as momentous as the one that will begin next week on Sept. 16.

That’s because Fed policymakers will have to decide whether to raise short-term interest rates for the first time since June 29, 2006 – with all the potential, resulting market turmoil it may unleash. Judging by what has already happened ahead of that two-day meeting, there could be tons of it.

Think about it: The Fed has spent nine years and three months in easing mode. It has slashed rates to the bone, printed trillions of dollars out of thin air, and forced investors (kicking and screaming) into the most esoteric, highest-risk, overvalued securities in an attempt to kick-start economic growth.

Even the elimination of QE here didn’t technically end the easing process – the Fed has continued to invest the proceeds of maturing bonds into new bonds. And the Bank of Japan, European Central Bank and other foreign institutions were more than happy to pick up the slack.

But now, we’re closer to a hike than we’ve been at any time since a year before the first iPhone hit the market … The Departed wowed gangster film enthusiasts … and (ironically enough) free-market economist Milton Friedman died.

Several Fed officials have already come out and strongly suggested they want to raise interest rates, but are worried about recent events in China and the potential impact of a rate rise on the value of the dollar. That includes Vice Chairman Stanley Fischer.

Other policymakers have basically said they wouldpush for a rate hike no matter what. That includes Richmond Fed President Jeffrey Lacker and St. Louis Fed President James Bullard.

The rest of the world has had a lot to say, too. The Financial Times carried dueling articles on Wednesday from former Treasury Secretary Larry Summers and former Dallas Fed President Richard Fisher. Summers asked the Fed to hold off, while Fisher urged the Fed to just get it over with already.

The chief economist of the World Bank also just warned the Fed that raising rates could cause “panic and turmoil.” That echoed cautionary remarks a few days earlier from the head of the International Monetary Fund (IMF). In short, everyone and his sister has an opinion on what the Fed should and will do – not just here in the U.S. but around the world. That means there’s no consensus in the markets, and that one side or the other will almost certainly be disappointed. As a result, we could see huge amounts of volatility and wild market moves when the decision is released.

Personally, I believe the Fed should have started raising interest rates a few quarters ago. Economic and market conditions clearly warranted it. They chickened out at the time, and now I believe there’s a 60%-70% chance they end up hiking right into the teeth of a significant global crisis and a possible U.S. economic slowdown.

Speaking of which, we’re already seeing a ton of the “Bloody Wednesday” market events I forecast months ago … just as a result of the Fed talking about possibly hiking rates. That shows how risky and unstable today’s economic and market backdrop is.

It’s also why I continue to recommend you take prudent steps to protect your capital – regardless of whether the Fed does or doesn’t hike next week. We’re in a new market paradigm, one where investors can no longer count on the willingness OR ability of central bankers to save them every time they get in trouble. And that means you have to change your way of thinking and investing if you want to prosper.