Will the 1998 Russian Meltdown Repeat Itself? 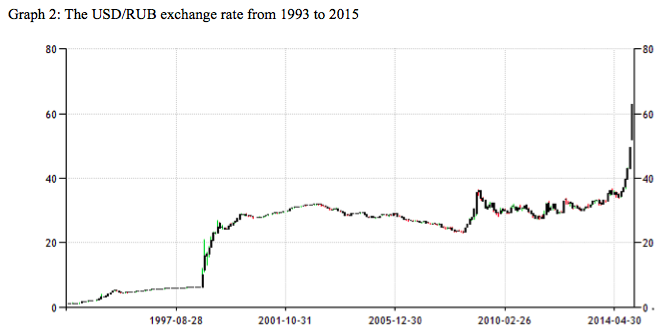 History never repeats itself exactly, but many similarities between the past and the current Russian crisis suggest that the eastern bear could significantly falter in the future:

On the other hand, some analysts point out a few significant differences between 1998 and the current crisis in Russia and argue that today’s financial troubles will not be as severe as in the past. Why do they think so and why are they wrong?

Nevertheless, the global economy is rather weak and fragile right now. Volatility is up. The gold to oil ratio is above 20, which usually implies a crisis. The Swiss National Bank removed the franc’s peg to the euro, signaling no faith in euro. Thus, the growing problems of Russia may lead to even further elevations in global risk aversion and to portfolio rebalancing or capital outflows from other emerging markets which are more interconnected with developed markets. The fall of the ruble has already affected the currencies in many post-Soviet countries that are still economically tied to Russia. Leveraged investors may also try to cover their losses in Russia by selling debt tied to other emerging markets. Moreover, the deepening of the crisis may attract a landing of another geopolitical black swan released by the Russia. Indeed, fighting in the Ukraine continues to support gold prices.

So, is Russia heading to a new 1998 crisis? Public finances are in relatively good shape, so the government default is not as probable as in the late 1990s (so far). However, Russia is entering into a full-blown financial crisis with banks and companies’ defaults (which may entail a sovereign debt crisis in the future). A crisis caused by the falling ruble and following balance sheet problems, just as in 1998, when private banks as well as the state bank collapsed.

If you enjoyed the above article, we invite you to stay updated on the latest developments in the emerging markets and global economy by joining our gold newsletter. It’s free and you can unsubscribe in just a few clicks.