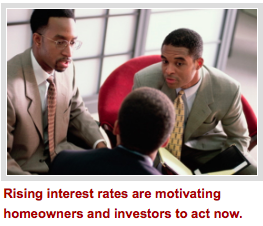 I’ve got to hand it to the majority of pundits out there. They just never learn to think for themselves. They keep dishing out the same nonsense, over and over again.

For instance, the notions that rising interest rates will kill off equity market gains, particularly in the U.S. … or choke off a real estate recovery … or kill the gold market for good — are myths. Period.

That’s important to understand. As rates rise from essentially 5,000-year-low levels — no matter what any central bank does — many investors will run for cover. But the only market that rising interest rates will truly hurt is the value of sovereign bonds. In other words, it will demolish governments’ ability to ever borrow again (a good thing). Consider what’s happening right now with real estate. Why would rising mortgage rates — at this point in the economic cycle and recovery — be bad for property prices?

They won’t be bad. For the simple reason that as mortgage rates start to rise, all the pent-up demand for property will come out of the woodwork and start buying — in anticipation of further increases in the cost of borrowed funds.

That’s precisely what is happening in the U.S., in particular, where a housing recovery is well underway.

Consider the latest data from brokerage Douglas Elliman Real Estate, where January 2017 was an excellent month for high-end sales in Connecticut and where sales from $1 million all the way up to $5 million increased significantly compared to January 2016.

Overall, total inventory is down to 447 houses which is 13 lower than last year at this time, while total sales are up 16.

That’s the high end. Meanwhile, the overall ownership rate in the U.S. is at its lowest level since 1965!

But that will change quickly as mortgage rates start to rise and all that pent-up demand comes out of the woodwork.

This is happening in the suburbs of America as well. Rising interest rates are motivating homeowners and investors to act now, rather than later, when the cost of borrowed funds will be even higher.

That’s just the property markets. Rising interest rates are also going to prove positive for equity markets. While equity markets in the U.S. and Europe remain vulnerable to a short-term pullback, rising rates will be a bullish factor over the long haul.

It means economic activity is picking up. It means the velocity of money turnover is improving, and it means increasing demand for credit — all of which are bullish fundamental forces for equities.

Not to mention the war cycles, which are driving trillions to our shores.

Ditto for commodities. The notion that gold will simply roll over and die and that a new bull market leg higher is impossible with interest rates rising, is brain-dead.

Just consider the last big bull market in gold, from 1973 to 1980, when interest rates were soaring as was the price of gold and most commodities.

Sure, inflation was roaring higher then too. But that doesn’t negate the fact that gold soared with higher interest rates.

Instead, it proves my point: Until interest rates get well ahead of inflation — which is something we will not see for years based on my models — they will not be negative for gold!

That said, right now, most commodities still have some work to do on the downside before they bottom, which they will do this year in the first quarter.

But bottom they will — and they will rise again — along with rising interest rates.

Like many of you, I am watching gold like a hawk. It’s already following my AI models nicely, staging a rally, coming off an extended cycle low.

The best news: Basis the active April gold futures contract, we now have a close above the $1,220 level, a weekly buy signal.

Time to back up the truck? My answer: No. Wait until I give you the final major buy signal. That’s what I am personally waiting for before I load up for my family. So, I give you the same advice I am acting on.

And rest assured that when that signal comes, I will be recommending a nice combination of physical precious metals, ETFs, including leveraged ETFs, and for some of the best profit potential out there, select mining shares.

Subscribers to my Real Wealth Report and Supercycle Trader will get the signal first, and simultaneously.