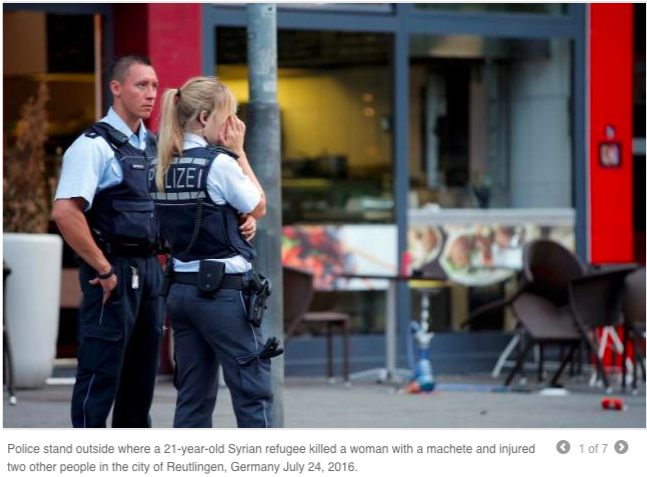 This series is based on the premise that debt works the same way for countries as it does for individuals and families: When you borrow too much your life spins out of control. For national and multi-national entities that means elections become unpredictable, economies function erratically, and public policies become more ad hoc and less effective.

And civil unrest becomes the rule rather than the exception. In the US, for instance, it’s suddenly open season on both black men and the police. And in Europe, the following happened in just the past couple of weeks: (Zero Hedge) – The perpetrator had an argument with a woman near the central bus terminal in Reutlingen, and during the altercation severely injured the woman using a machete. The woman died of her injuries at the scene, police said. The perpetrator was then detained near the scene “in minutes” after the incident but managed to injure another woman and a man, police added. The eye witnesses described the attacker to Bild as “fully insane,” adding that he tried to attack a police car with his machete.

German Police Kill Assailant After Ax Attack Aboard a Train

(New York Times) – WEIMAR, Germany — A 17-year-old Afghan youth who came to Germanyas a migrant last year attacked several passengers with an ax and a knife on a train in the south of the country late on Monday, injuring at least four people, while 14 others were treated for shock, the police said.

After the train made an emergency stop, the attacker fled and was pursued by police officers, who fatally shot him, according to the interior minister of the state of Bavaria, Joachim Herrmann. The motive for the attack remained unclear.

The young man had entered Germany without his parents and applied for asylum, Mr. Herrmann said. According to government figures, more than 14,400 unaccompanied minors arrived last year among the more than one million migrants who entered the country.

(CNN) – At least nine people were killed and 16 others injured Friday in a shooting rampage at a busy shopping district in Munich, Germany, police said.

The unidentified attacker was an 18-year-old German-Iranian who had lived in Munich for at least two years. The man was not known to police and his motives are unclear, authorities said. No group has claimed responsibility.

Many children were among the casualties.

Despite being under a heightened state of emergency, French security forces failed to stop Mohamed Lahouaiej Bouhlel from barging past police vehicles at the entrance to Nice’s famed Riviera beachfront, where the zig-zagging truck he was driving instantly transformed a crowd of families and fun-seekers into utter tragedy.

“The fact that this attack occurred when security measures were supposedly in place makes this very different from previous attacks,” said Neil Greenberg, a professor of military mental health at King’s College London. “That undermines the trust people have in the government to stop these events and it is extraordinarily hard to rebuild that trust once it’s lost.”

This sudden outbreak of apparent insanity doesn’t seem closely tied to the recent change in our borrowing habits. But it is, in several ways. First, the ability to borrow effectively-unlimited amounts of money has set major governments free to intervene militarily in the Middle East and elsewhere, leading to the flood of refugees now destabilizing Europe and breeding the kinds of nothing-left-to-lose behavior chronicled above.

Second, since borrowing and spending money in the present is effectively stealing growth from the future, the more a country borrows, the harder it becomes to provide good jobs and effective public services for the people at the bottom of the economic ladder. Poor, desperate people are inherently more volatile and more likely to crack under the strain of their poverty.

Third, as the easy money policies that once greased the wheels of statist political machines stop working, the people in charge (who have just that one tool in their box) are resorting to ever-more-extreme parodies of past policies – low interest rates being replaced by negative rates, short-term infusions of modest liquidity giving way to massive and apparently permanent central bank purchases of bonds and stocks). These new policies, rather than being simply ineffective, are actively damaging. So the death spiral of the fiat currency, fractional reserve banking system is being turbocharged, which is why the atrocities seem to be occurring at shorter and shorter intervals.

Note that three of the four attacks mentioned here didn’t require guns. People are figuring out that trucks and tools work just fine for mass slaughter as long as the attacker doesn’t mind dying at the end. This opens up myriad possibilities for creative nihilists.

Two headlines hint at what happens next: