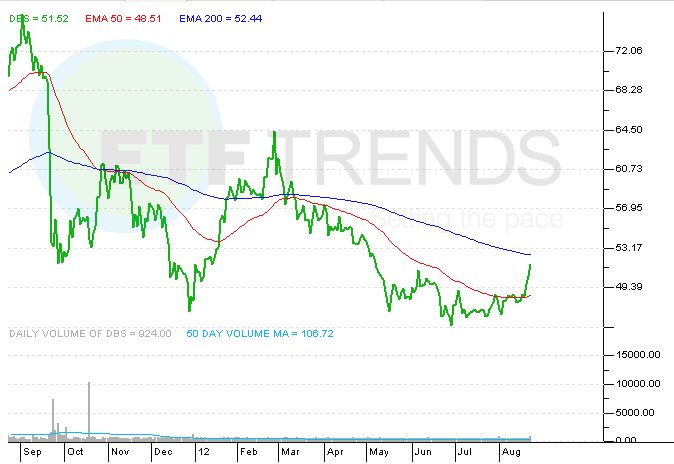 Noted commodities investor Jim Rogers has recently pointed to silver as a metal of choice over gold for the current economic climate. [Rogers: Use Commodity ETFs to Profit from Supply Shortages

Rogers notes that silver’s volatility makes it the perfect precious metal for Fall, once the widely expected Fed decision to implement a Quantitative Easing 3 is announced.  “A huge amount of money will come into commodities the next decade as people learn about supply shortages. Very few people are invested in real assets.”

“Something is finally happening with silver. The chart below shows silver up five days running, and on rising volume. Let’s keep an eye on “the poor man’s gold.” The silver-to-gold ratio was out of whack — silver was too cheap compared with gold. One ounce of gold will buy 32.7 ounces of silver. The ratio should be nearer 20 or even less. According to RSI silver is now overbought.” – Richard Russell Dow Theory Letters Aug 30/2012

“Consider this: Silver is the only major commodity not to have reached a new all-time high in this bull market; silver is still cheaper than it was 32 years ago, prices are astonishingly depressed,” Peter Cooper wrote for Resource Investor.  [Silver ETFs Not Shining in 2012]. “Investment demand for precious metals will take over in any case from industrial demand. And once the gold price heads up then silver will follow. You get 50 times more silver for your money than gold,” Cooper also wrote HERE

“Gold investing has long dominated the precious metals space, as investors have used this ultra-popular metal as both a trading/speculative instrument as well as an integral part of a longer term strategy. While silver still has a large presence in the financial world, it is not often that a big name steps into the limelight and touts this white metal over its gold counterpart,” wrote Jared Cummings for Commodity HQ.