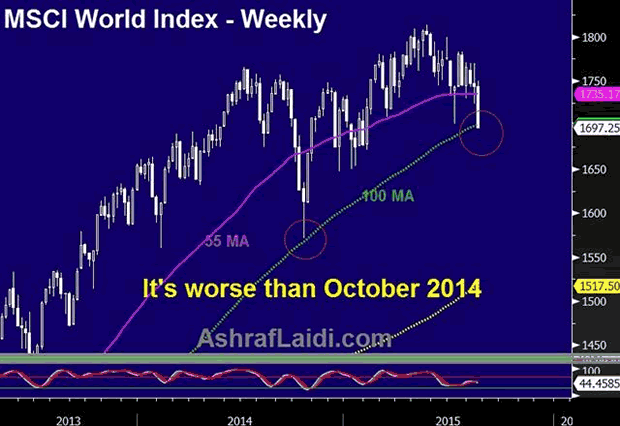 Fed funds futures are coming around to the idea of no September rate hike, a position we long held since last December based on the argument that inflation in 2015 will move further below the Fed’s mandate, to the extent that the tightening in labour markets is inadequate to stir up inflationary pressures. The negative trifecta of: i) slowing China; ii) strengthening US dollar; and iii) rising oil supplies has unleashed a negative feedback loop of accelerating descent in oil prices, gloomy climate for emerging market’s exports to China and broadening cuts in capex from energy gains dwarfing any savings to US consumers from lower prices at the tank.

Most market and survey-based measures of US inflation are lower than in October 2014. Unlike survey-based inflation measures, which are provided monthly, break-even rates priced off US inflation-protected bonds are available daily, with the 2-year BE tumbling near 7-month lows at 0.24% and 5-year BE rates at 1.2%, the lowest since 2010. Is the Fed being inadequately taking notice of falling oil prices? This WILL change in the September meeting and the first hint of which will be seen in next weekend’s speech by Fed governor Stanley Fischer at the Jackson Hole conference.

Since October, the USD has gained an additional 12% against most major currencies, exacerbating the currency translation effect for US multinationals and increasing the price for US exports in the global market place. Surging costs of USD-denominated loans are also punishing emerging markets, especially in Asia. More than $900 bln in USD-denominated debt remain unpaid in corporate China.

Two weeks after global yields and share prices plummeted in midOctober, the Bank of Japan surprised the world with a rare split 5-4 decision in its policy board to accelerate the monthly purchases of Japanese government bonds so that its holdings increase at an annual pace of 80 trillion yen.

Markets’ reaction to these events was a 2-month rally in global shares, which eventually stalled in January 2015 as the New Year gave its first hint of impending deflation.

China today is far weaker than it has ever been over the last 15 years. Most services and manufacturing surveys indicate a contraction, while exports have declined for the 5th month over the last seven months, driving down currency reserves to two-year lows. Tying the yuan to the rising USD has worsened the situation since October.

This month’s CNY devaluation may be a stimulus for China, but its impact on the rest of the world is the antithesis of QEs from the BoC and ECB.

We raised the target on our EURUSD longs from Jul 30 (pre-NFP) as the unwinding of EUR shorts has yet to extend once a 2015 rate hike is completely shut out of the market. The euro unwinding is partly joined by further losses in the Eurostoxx and the Dax, with 9,970 and 1,830 targets cemented for the Dax-30 and S&P500.