Why is August the Most Active Month for War? 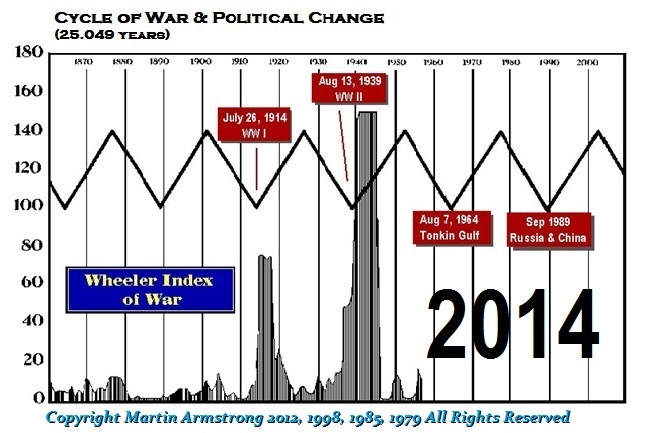 Martin’s answer to a question:

“The majority of wars have begun in the spring and summer with August being the danger zone.

The War of the Roses began on May 22, 1455, which was one of the earliest. The 100 Years War really began on June 24, 1340. As we bottomed in global climate during the 1700s, this cycle shifted the wars to late summer. The American and French revolutions technically began in July. However, the insurrection of August 10, 1792, was one of the real defining events in the history of the French Revolution since the monarchy fell 6 weeks later. If we look at World War I, that began on July 28, 1914, and World War II began on September 1, 1939. The Vietnam War and the Tonkin Gulf incident was August 1, 2014. The Gulf War (first invasion) took place on August 2, 1990. The Iraq War (second invasion) began on March 20, 2003, but this was clearly a monetary war game set in motion by Dick Cheney, as it appears clearly out of sync historically with conflicts.

We are in the danger zone this month for armed conflict. The cycle turned up in 2014. Ever since, we have seen a rising international arms race created by Obama and a rising trend of civil unrest and terrorism. We have Iran and North Korea in a mad rush to enter the nuclear weapons game. So yes. Beware of the month of August. Statistically speaking, this tends to be the favored season for war events.”

…related from Martin: The Contest Between Islam & Christianity Returns? & The New Highs in US Share Market Are they the Prelude to a Crash?