Why Germany Wants its Gold Back 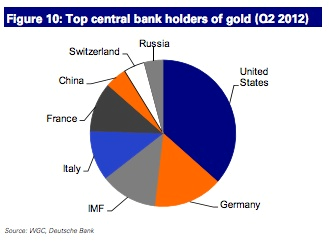 In a recent watershed decision the Bundesbank, Germany’s central bank, has decided at least half of its gold should be held in its own vaults.

Since the Bundesbank is the second-largest gold holder in the world, that’s going to mean moving 54,000 bars of the shiny metal. According to Der Spiegel:

“Finally, in 2007, “following numerous enquiries,” Bundesbank staff members were allowed to see the facility, but they reportedly only made it to the anteroom of the German reserves.

So why would the Federal Reserve deny the Bundesbank a full inspection and audit?

That question has been rich feed for the rumor mills ever since the news broke.

It shouldn’t take until 2020 for it to make its way back home. Seven months — maybe. Seven years means something else is up.

So let’s have a closer look at the surrounding facts…