Why Big Market Gains Are Still on the Way 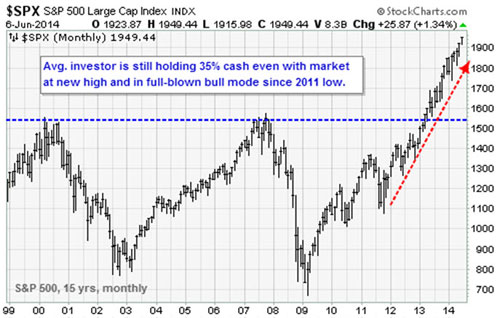 Stocks blitzed to new highs again in the past few days, capping a remarkable three-week melt-up that’s been sparked by a growing sense that nothing can shake this market. Sentiment is quietly confident, rather than ebullient, as expectations are high among professionals that both GDP growth and earnings growth are set to rebound from anemic levels.

Yet the public is still not buying in, which means the advance is sustainable as more people are encouraged to come off the sidelines.The New York Times reported on Saturday on new research on investors in 16 countries by State Street’s Center for Applied Research that showed retail investors globally were holding an average of 40 percent of their assets in cash, up from 31 percent two years ago.

The lowest levels of cash holdings were in India, at 26 percent, and China, at 30 percent; the highest was 57 percent in Japan. The U.S. was in the middle at 36 percent, but that was an increase of 10 percentage points in just two years. Despite the run-up in equity markets, the Times reported, people have resisted rushing into stocks and have instead added to cash. They have done this regardless of their age or amount of wealth. The study found that millennials who are under 33 and have the longest time to invest their money were increasing their cash positions at the same rate as baby boomers, who will need to draw on their investments soon.

Why is this happening? The Times asked Suzanne Duncan, global head of research at State Street’s Center for Applied Research, and she chalked it all up to fear; even though it has been more than five years since the S&P 500 hit its low. Amazing.

A low-volatility grind higher in prices such as we have seen in the past two weeks is just the climate that can make people comfortable again. In short, these cash hoarders can be persuaded to invest, and will help add fuel to the fire.

I have been saying for five years that the ultimate destination for the S&P 500 in the bull market that started in March 2009 is around 3,330, which is 53 percent higher than the current perch. This is not a wild guess; it’s 5x the benchmark index’s bear market low of 666, which has been typical for bull markets fueled by the intense capital infusion by central banks. It takes a long time for the medicine to work its magic.

Looking around, there’s plenty of optimism in the air. The IPO market is warming up, with the share of no-profit companies coming to market not seen since the dot-com mania. Look at Uber — the ride sharing/limo app, which just got a financing-round valuation of $18 billion. With a B. Emotion is a powerful thing. So far, it’s overpowering a stretch of the calendar that is traditionally weak for stocks, as well as a lukewarm Q1 earnings season, and a disappointing -1 percent annualized contraction in the economy in the first three months of the year.

How long will it last? For the answer, keep an eye on Apple (AAPL). Much of the S&P 500′s vertical launch over the past three weeks has been due to the rise in AAPL on excitement over upcoming product announcements, share buybacks and today’s 7:1 stock split. AAPL has a huge influence on the S&P 500 (and the Nasdaq) because of its massive market capitalization. One way to think about the situation is that as long as investors keep having an AAPL a day, they’ll keep the bears away. Another is to observe that Apple has a whole lot of catching-up to do to chase down the S&P 500, as shown in the chart above. You know I am not a fan of the company’s products or services, but it has probably been punished enough for several years of shameful product management.

Shares are cheap with a forward price/earnings multiple of 13.4x and price/sales of 3x while a comparable firm, Google (GOOGL), goes for 18x and 6x and Netflix goes for 6x and 5.5x. The Parallax Financial model, which is very conservative, has pegged the shares with an intrinsic value of $1,095. That would amount to a 68 percent move up from here.

Could a revitalized Apple be just the rocket fuel the S&P 500 needs to get to 3,300? I’m going to say yes, though with a list of caveats as long as the line outside an Apple store when a new phone goes on sale.

P.S. My recent picks are already posting huge gains — with my favorite stock doubling … tripling … and even quadrupling. Now I have 5 red-hot technology stocks for you to check out. Just click here for your FREE copy of my report, New Technology Superstars for 2014.

About Jon Markman
Jon began his career as editor, investment columnist and investigative reporter at the Los Angeles Times. As news editor, his staffs won Pulitzer Prizes for spot-news reporting in 1992 and 1994.

In 1997, Microsoft recruited Jon to help launch MSN’s finance channel, where he served as Managing Editor. In that capacity, Markman became the co-inventor on two Microsoft patents.

From 2002 to 2005, Jon served as portfolio manager and senior investment strategist at a multi-strategy hedge fund.

Since 2005, Mr. Markman has specialized in helping everyday investors buy tomorrow’s technology superstars BEFORE they skyrocket.