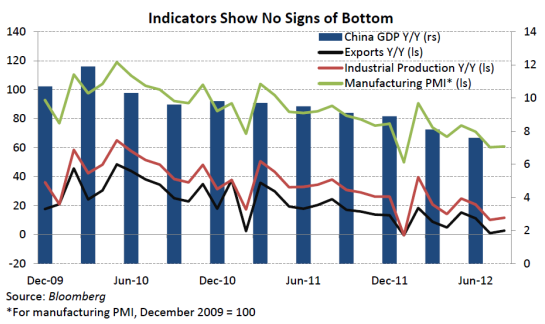 The latest monetary easing by the European Central Bank (ECB) and Federal Reserve has given financial markets on both sides of the Atlantic a positive lift. But the global cheer did not extend to China as stocks in Shanghai continue to slide.

In fact, many emerging stock markets have been under-performing, as I pointed out in a previous Money and Markets column. And the trend hasn’t improved much for some, including China, in spite of a pickup in global capital flows into the region.

But all emerging markets are not created equal. While some are high-profile laggards, others are beginning to outperform.

This highlights the fact that not all emerging markets are moving up or down together these days. It also underscores the importance of doing your homework to uncover the hidden opportunities in emerging markets.

[Editor’s note: To help you uncover these opportunities, Mike has a FREE special report where he gives you his five tried-and-true rules for global ETF trading. Click here to read it now.]

China, the emerging market poster-child, has continued to underperform almost all major global stock markets in 2012. The Shanghai Composite index is now down 36 percent from its 2009 peak — a period in which the S&P 500 Index soared 44 percent.

The reason: China suffers from self-inflicted economic wounds. Its past reliance on an export-led growth model was fine … when the global economy was going strong. But as you can see in the chart below, China’s trade volumes are shrinking, and the global economy is forecast to expand just 2.1 percent in 2012. Years of over-investment in China has led to a glut of unused industrial capacity and a real estate bubble, souring investor confidence. On top of that, according to the World Trade Organization (WTO), global trade volume expanded just 5 percent last year, down from 13.8 percent in 2010, and is expected to slow further to just 3.7 percent this year.

The result: China’s industrial output growth in August fell to the lowest level in three years. The People’s Bank of China is cutting interest rates, the same as many other central banks around the world. But investors worry that further easing may only inflate property values without doing much for the real economy … that sounds familiar.

Unfortunately, there is not much evidence pointing to a turnaround for China’s economy anytime soon.

Of course China is certainly not alone in experiencing a manufacturing slowdown as a result of the downshift in global growth — it’s just more apparent for their export-led economy.

A recent survey of global manufacturing purchasing managers index (PMI) readings by Bloomberg finds 20 out of 24 countries are showing contraction in their manufacturing sector. The countries that still have expanding PMI’s include: Mexico, India, Russia, and Ireland. India, for example, is much less reliant on export growth than its neighbor China. And its economy should expand 6 percent this year — certainly in the top-tier among global GDP growth. Global investors have noticed …

It’s no surprise that India’s stock market has been one of the better emerging market performers … up nearly 20 percent year-to-date and tops among the big-four BRIC markets.

The Bright Spot in Europe

In Europe, where many stock markets, both emerging and developed, have been crushed this year by the European debt crisis, Russia has been a bright spot with its equity market up 12 percent this year. Granted, its economy remains closely linked with commodity prices, particularly energy. But Russia’s economy should grow 3.7 percent this year.

And Russia’s recent entry into the WTO could provide the same kind of boost to its economy as it did for China over a decade ago. Plus, Russian stocks are among the world’s biggest bargains, trading at less than six times earnings today.

Bottom line: Despite the ongoing and high profile underperformance of markets like China, not all emerging markets are lagging, and several are beginning to take the lead in performance. That’s why global investors must differentiate between the fundamentals of each market — evaluating them one country at a time.

About Money and Markets
For more information and archived issues, visit http://www.moneyandmarkets.com
Money and Markets is a free daily investment newsletter published by Weiss Research, Inc. This publication does not provide individual, customized investment or trading advice. All information is based upon data whose accuracy is deemed reliable, but not guaranteed. Performance returns cited are derived from our best estimates, but hypothetical as we do not track actual prices of customer purchases and sales. We cannot guarantee the accuracy of third party advertisements or sponsors, and these ads do not necessarily express the viewpoints of Money and Markets or its editors.