Who Is Saudi Arabia Really Targeting In Its Price War? 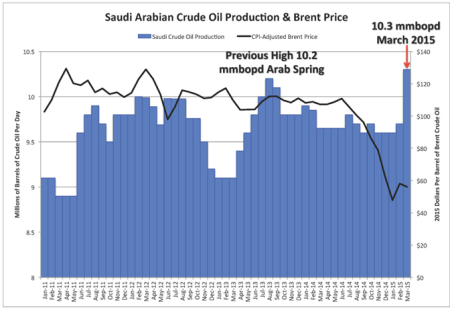 Saudi Arabia is not trying to crush U.S. shale plays. Its oil-price war is with the investment banks and the stupid money they directed to fund the plays. It is also with the zero-interest rate economic conditions that made this possible.

Saudi Arabia intends to keep oil prices low for as long as possible. Its oil production increased to 10.3 million barrels per day in March 2015. That is 700,000 barrels per day more than in December 2014 and the highest level since the Joint Organizations Data Initiative began compiling production data in 2002 (Figure 1 below). And Saudi Arabia’s rig count has never been higher.