Which of these would you rather have in your safe? 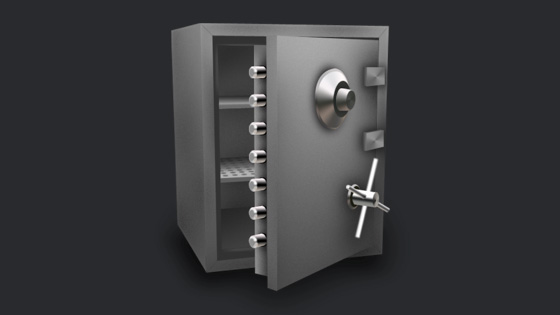 Let’s say you have two equal size safety deposit boxes. One box you completely fill up with stacks of $100 bills. The other box you fill up with gold. Which of the two is “worth” more? It’s easy to calculate. A stack of 100x $100 bills is 6.14 inches long, 2.61 inches wide, and 0.43 inches tall. That’s a volume of 6.89 cubic inches (112.92 cubic centimeters… and we’ll use the metric system from here on out because it really does make more sense!).

As of this morning, gold is worth $37,811 per kilogram, meaning the value density of that 1kg bar is $1,278.75 per cubic centimeter. So gold is clearly more value dense than paper money, i.e. you can store a LOT more value in the same amount of space with gold than you can with paper money. What about silver?

And the 1,000 Swiss franc note has value density of $827.14 per cubic centimeter. Let’s look at fine wine: a bottle of 2005 Petrus sells for about $4,200; with a storage volume of 1,331 cubic centimeters, the wine’s value density is just $3.15. The “5270G-018 Grand Complications” model of watch manufactured by Patek Philippe sells for about $145,000. It measures 72 cubic centimeters in total volume, for a total value density of $2,013 per cubic centimeter. 200 rounds of 7.62mm ammunition in a bulk ammo can measures 4,014 cubic centimeters. At a cost of around $150, the ammo’s value density is about 3.7 cents. August 1962 edition of the Amazing Fantasy comic book featuring Spiderman on the cover (and signed by Stan Lee) sells for nearly $38,000. It’s a comic book, so it’s small, at just 345 cubic centimeters. So its value density is $110.14 per cubic centimeter. Rare colored diamonds, as you can probably imagine, are extremely expensive. A tiny 0.11 carat “fancy vivid purplish pink” measures just 12.91 cubic millimeters, or .01291 cubic centimeters. Most of the normal colorless or near-colorless diamonds that are sold in mass market jewelry stores are terrible investments. They’re not rare, and they’re overpriced. But high quality colored diamonds can be extremely rare, and that scarcity drives the price much higher. That’s why a tiny 0.11 carat colored diamond is currently listed at $10,573, making its value density a whopping $818,977.53 per cubic centimeter. So let’s look at all of these assets in order of least to most value dense: Value of assets in dollars per cubic centimeters: Ammunition: $0.037 Fine wine: $3.15 1-kg Silver bar: $5.11 $100 bills: $88.55 Rare comic book: $110.14 500-euro notes: $373.05 1-kg Gold bar: $1,278.75 Luxury watch: $2,013 1,000 Swiss franc: $827.14 Colored diamonds: $818,977.53 Now, in my view, given the potential costs and challenges of the other assets, gold still remains the top choice. Luxury watches may be more value dense than gold, but the marketplace is limited and the costs to sell are much higher. There are gold dealers in just about every major city on the planet, so you’d be able sell a gold bar in no time at all, at very little cost. Colored diamonds, luxury watches (and even comic books) could take much more time to sell, and you might need to pay steep commissions to close the deal. Plus, the gold price is quoted worldwide, round-the-clock. There’s never any question about how much gold is worth. The 1,000 Swiss franc note is more value dense than gold. And for now, Switzerland has resisted the calls to ban the note, as Europe has done with its 500-euro note. But I wouldn’t expect that sensibility to last forever. Between the two, gold is likely safer from a regulatory perspective… and more universal. But fortunately the decision doesn’t have to be mutually exclusive. You don’t need to choose between one and the other. So if you’re going to fill up your safe, choose a variety of assets. You can start small– silver coins and $20 bills. Now, there’s one asset here that I didn’t list. You might have thought of it already… it’s one that blows the rest away in terms of its value density. I’m talking about cryptocurrency. Bitcoin, for example, takes up precisely zero space. If you really wanted, you could memorize a string of digits and store millions of dollars in your head. Even if you wanted to print out a 250-pixel QR code and keep it in your safe, it would take up a laughable amount of space, roughly 0.21 cubic centimeters– not much bigger than a tiny diamond. Yet that same 250-pixel QR code could hold $1 worth of bitcoin… $100… $1,000… or even millions. In other words, the value density is enormous. Now, I’m not encouraging you to dump all of your savings in cryptocurrency– there are still plenty of growing pains ahead. But it’s important to understand the many benefits of cryptocurrency… and value density is just one of them.

also from Simon: Incredible opportunities in a hidden corner of the world