Where – & When – the ‘Smart Money’ Is Placing Its Bets 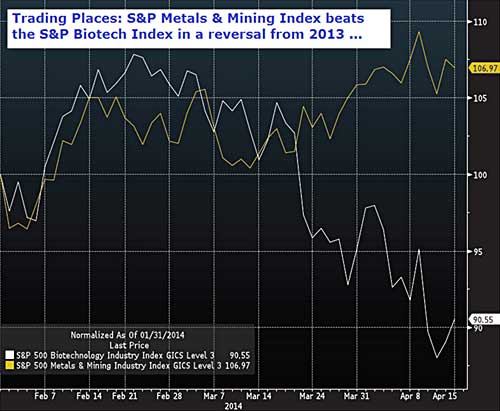 Stocks remain under selling pressure this week as they have been since the start of the second-quarter of 2014. The Dow Jones Industrial Average reached a peak of 16,574 on April 4, and for the most part, it’s been downhill since then.

The selling appears to be mainly driven by institutions, the so-called “smart money” crowd persistently unloading shares in the late afternoon.

Interestingly, some of the stocks and sectors hit hardest with selling in recent weeks were among last year’s best performers. Meanwhile, last year’s laggards are performing well in April, despite the increased volatility.

For example, the hardest hit sectors this month include last year’s two top-performers: Biotechnology and Internet.

Just a year ago investors couldn’t own enough of the high-beta momentum stocks. Biotech shares surged 74.3 percent in 2013, the top-performing sector, while Internet retailers ranked a close second with a 73.5 percent gain. Internet software and services cracked the top 10 with a 48.8 percent gain.

Alas, momentum can cut both ways …

Since late February the Nasdaq Biotech Index has tumbled 21 percent, while the Dow Internet ETF (FDN) is down 13.9 percent.

And yet the selling hasn’t exactly been indiscriminant either. In fact, while many high-flying tech stocks have been hammered, other, more reasonably valued tech sectors are performing well. The same pattern plays out among healthcare stocks. Sure, biotech shares have dragged the entire sector down, but health care equipment stocks and managed care providers are two sub-sectors that have been largely immune to the sharp selloff.

That tells me the recent correction in stocks is more about sector rotation within the stock market rather than broad-based selling of all stocks. The big money appears to be cashing in some of last year’s big winners, and moving money into more undervalued sectors within the market.

And who can blame them after 70 percent-plus gains in biotech and Internet stocks last year?

Now, the smart money is finally piling into some of the out-of-favor sectors from last year … stocks and sectors that I have favored since late 2013, expecting just such a reversal of fortune. Or as the astute Michael Santoli recently wrote: “The dominant themes of the sharp pullback have been a reversal of the winning investment trades of 2013 (which got very crowded and expensive).”

Case in point: Mining stocks. You can’t find a more maligned group during 2013 than precious metal stocks. The Philadelphia Gold and Silver Sector Index (XAU) of mining shares plunged 48 percent in 2013, but what a difference a few months can make. Mining stocks are up 7 percent year-to-date, even after the recent pullback in the gold price, and at the peak in mid-March XAU was up 20 percent.

In fact, commodities in general have provided positive performance for investors so far this year. In a big trend reversal from recent years, the Continuous Commodity Futures Price Index (CCI), an equal-weighted average of commodity prices, has gained 11 percent year to date. Beneath the surface, several markets are performing even better.

This rotation out of last year’s best-performing stocks and sectors has been swift, and it’s clear that hair-trigger institutional investors are behind the move. I have noticed a consistent pattern in recent weeks for stocks to trade higher in the morning only to fall victim to an afternoon swoon.

That’s a sure sign of “smart money” selling at work just prior to the close. The Smart Money Flow Index (SMFI) (see graph below) subtracts the first half-hour of emotionally driven buying and selling from the Dow and places more focus on the last hour of trading. This is based on the theory that the first 30 minutes of trading is dominated by market orders from retail investors or index-tracking funds. Meanwhile, the “smart money” waits until the end of the day to make their move into, or out of, stocks in a big way.

According to Bloomberg data, the Smart Money Flow Index has plunged 8.8 percent since the beginning of March, while the Dow itself has declined just 2 percent. This means the stock market’s heavy-hitters have been eager sellers into the close.

A negative divergence like this, when the SMFI is falling faster than the Dow, is generally a sign of selling ahead and lackluster returns for stocks. That is, until the “smart money” starts buying again.

The good news is that most stocks and sectors are already approaching oversold levels now, and the recent correction is creating more attractive prices for long-term investors, especially in select biotech and internet stocks.

So keep a watchful eye on the market’s direction during the all-important last hour of trading. Look for more buying on strength into the close, rather than selling into market weakness, as a first sign that stocks are stabilizing and the correction may be ending.