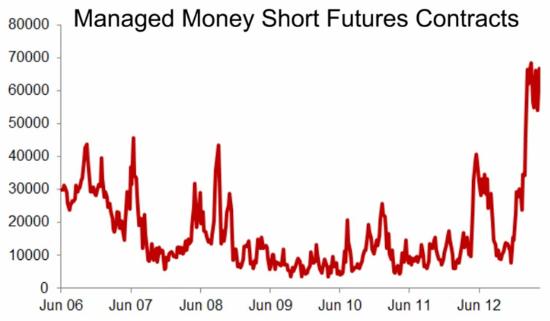 Bloomberg is reporting on the rising number of hedge funds shorting gold:

The funds and other large speculators held 74,432 so-called short contracts on May 14, U.S. Commodity Futures Trading Commission data show. That’s the highest since the data begins in June 2006 and compares with 67,374 a week earlier. The net-long position dropped 20 percent to 39,216 futures and options, the lowest since July 2007.

Gold prices that surged sixfold in the past 12 years fell 19 percent in 2013, including a seven-session slump through May 17 that was the longest since March 2009. Soros joined funds managed by Northern Trust Corp. and BlackRock Inc. in cutting holdings of exchange-traded products in the first quarter. ETP assets are now at the lowest since July 2011 after some investors lost faith in gold as a store of value amid improving economic growth, low inflation and a rally in equities.

“Gold has faced disappointment after disappointment,” said John Stephenson, a senior vice president and fund manager who helps oversee about C$2.7 billion ($2.65 billion) at First Asset Investment Management Inc. in Toronto. “It’s had a 12-year run, but the whole fear-mongering that the world is going to end is just not working. So, I think that any last vestige of an investment thesis for gold has been stripped.”

Soros Fund Management LLC lowered its investment in the SPDR Gold Trust, the biggest bullion ETP, by 12 percent to 530,900 shares as of March 31, compared with three months earlier, a Securities and Exchange Commission filing showed May 15. The reduction followed a 55 percent cut in the fourth quarter last year. Paulson & Co., the top investor in the SPDR fund, maintained a stake of 21.8 million shares, now valued at $2.86 billion. Global ETP holdings slid 16 percent to 2,207.1 metric tons this year, valued at $96.5 billion.

Goldman Outlook
Gold’s slump “has been faster than we expected,” Goldman analysts led by Jeffrey Currie wrote in a May 14 report. A further drop in ETP holdings would “continue to precipitate this decline,” said the analysts, who forecast prices at $1,390 in 12 months. The metal will get “crushed” and trade at $1,100 in a year and below $1,000 in five years as inflation fails to accelerate, Ric Deverell, the head of commodities research at Credit Suisse Group AG, said in London on May 16.

India Premiums
Gold premiums in India, the world’s biggest buyer, more than doubled to $40 an ounce May 15 from $17 to $18 a day earlier, according to Bachhraj Bamalwa, a director at the All India Gems & Jewellery Trade Federation. China’s bullion demand jumped to a record 294.3 tons in the first quarter, the World Gold Council said in a report May 16.

Prices surged 54 percent since the end of 2008 as central banks printed money on an unprecedented scale to boost growth. The Federal Reserve is buying $85 billion of assets a month to stimulate the world’s biggest economy, while Japan is making monthly bond purchases of more than 7 trillion yen ($67.8 billion).

“The case for gold is still there,” Dietrich said. “All the central banks are joining in a massive printing of money. Physical demand may be helping provide a floor on prices, and while there’s not a lot of downside risk right now to gold, there is a lot of upside potential.” ……some thoughts on the above from John Rubino of DollarCollapse.com HERE