If a Market Reacts Poorly to Bullish News….LOOK OUT! 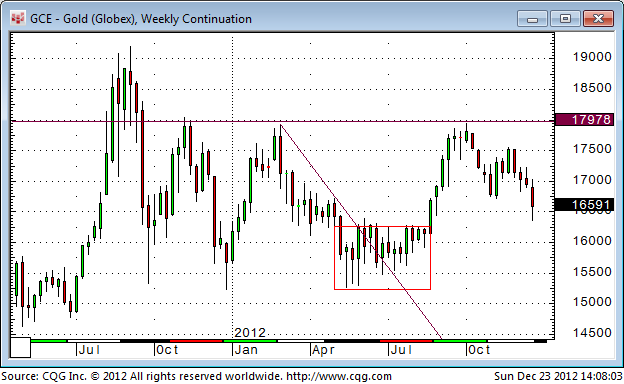 Precious metals:  Should have been rallying on the back of the global “reflationary” efforts from governments and central banks…and a weak US Dollar…BUT prices have been falling since early October.

Gold has fallen about $150 (just over 8%) from its October highs…last week’s Fed announcements and the “reflationary” election of Abe in Japan gave the market very little lift…when a market doesn’t react well to bullish news…LOOK OUT!

Someone is obviously selling…we may never know who or why…but on Nov 28 prices fell as much as $40 on the largest EVER daily volume in gold futures on the NY Comex …prices are down ~$100 since then. The selling could be totally un-related to gold…ie…a hedge fund may have taken big losses in the stock market and had to sell gold to raise liquidity….or the selling could be very much about gold…it’s had a great run over the last 10 years…maybe someone thinks the easy money has been made and it’s time to cash out…and move on to other things…see last paragraph below.

Silver: was also down on Nov 28, on larger than normal volume, but bounced back the next day….so the selling was gold specific. However silver began to outpace gold to the downside in early December and has fallen ~13% from last week’s highs to this week’s lows, compared to only a 5% loss for gold. This looks like capitulation selling in silver…liquidation of leveraged positions.

Gold and silver usually move more-or-less in tandem…BUT…when precious metals are charging higher silver will run hotter than gold…and when prices are falling silver will fall faster than gold. Since the October highs gold is down ~8%, silver is down ~16%.

Platinum: hit $1735 in early October following the “risk asset lift” from the September global round of “Q” announcements …it traded down to a low of $1525 Dec 21…down ~12% from the October highs, down ~7% from last week’s highs.

So far the selling of gold seems to be restricted to the futures markets…with gold open interest down ~12% in the last month…while outstanding Gold ETFs remain close to all time record highs. Gold bulls might see this as further evidence that the “paper gold” market is “silly” while the physical market tells the real story…however, if the sell-off in the futures market continues then we may start to see selling pressure in the physical market.

We are in thin year-end conditions and that could be exacerbating the declines. Last year gold fell from $1800 to $1530 in the last 6 weeks of the year…and then bounced back to $1800 two months later.

The traditional relationship of a weak US Dollar = higher gold prices has not been working lately…adding to the confusion.

The short term precious metal chart patterns look bearish…and the longer term trend line under the gold market since the 2008 lows has been broken. See charts below.

One of my key trading rules is to trade what the market is doing…not what I think it should be doing…this rule is VERY EFFECTIVE because so many people DO trade what they think the market should be doing…that is, they buy a market that they “believe” should be going up…and when it doesn’t go up they get trapped with a losing position…and then if prices decline and bearish Market Psychology intensifies they may be subject to forced liquidation.

I think “the public” is very inclined to “believe” the gold bull market story…it’s a very convincing story…there’s only so much gold and the authorities keep “printing” paper money…the gold bulls “really believe” the story and may therefore be more inclined to “go down with the ship” than say, soybean bulls or crude oil bulls.  One of the most common forms of DENIAL with traders who are holding a losing position is to change their time frame…that is, they buy something because they expect it to go up but when it doesn’t they convert it from a trading position to a “long term hold” to avoid taking a loss.

I’ve traded gold for 40 years. Physical gold, gold shares, and gold futures and options. I have a very good understanding of the fundamental reasons to be bullish gold…but I’m sensing a change in Gold Market Psychology…I’m watching the charts not reading the opinion pieces…I’ve said many times that I think the $1900 September 2011 highs could be the highs for a long time. (Those highs were All Time Highs in nominal US Dollar terms..23 year highs in terms of the S+P 500…an increase of over 800% in terms of the S+P 500 from the lows of July 1999.) If gold breaks below $1530 (it’s lows for the last 18 months)  then $1200 would be a reasonable near term target. If prices turn around and rally through $1800 then Gold Market Psychology should turn very bullish…and new All Time Highs would be in order.

Gold: had a Weekly Key Reversal Down from the $1800 level in February and trended lower into May….formed a rising wedge from May thru August (rectangle) and then broke out to the upside…only to be turned back again at the $1800 level in October. If gold finds support around $1630 ( the top of the rectangle) it may turn higher…if not, then expect a challenge of the $1530 level. Gold: The uptrend line from the 2008 lows was decisively broken in May 2012. The market rallied to the underside of the uptrend line in September/October 2012, but then turned lower…a bearish sign.

Note the powerful Monthly Key Reversal Down at gold’s All Time Highs. Over the years I have developed a number of trading and risk management “rules” (see:  http://www.victoradair.com/how-be-better-trader.)