Wheels Are Coming of Europe 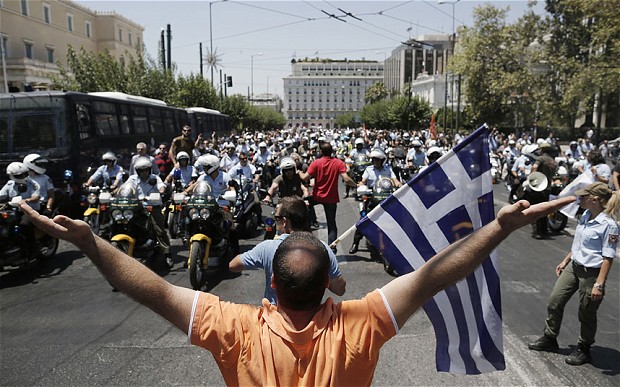 Europe’s debt-crisis strategy is near collapse. The Wheels Are Coming Off the Whole of Southern Europe. The long-awaited recovery has failed to take wing. Debt ratios across southern Europe are rising at an accelerating pace. Political consent for extreme austerity is breaking down in almost every EMU crisis state. And now the US Federal Reserve has inflicted a full-blown credit shock for good measure. None of Euroland’s key actors seems willing to admit that the current strategy is untenable. They hope to paper over the cracks until the German elections in September, as if that is going to make any difference. A leaked report from the European Commission confirms that Greece will miss its austerity targets yet again by a wide margin. It alleges that Greece lacks the “willingness and capacity” to collect taxes. In fact, Athens is missing targets because the economy is still in free fall…and that is because of austerity overkill. The Greek think-tank IOBE expects GDP to fall 5pc this year. It has told journalists privately that the final figure may be -7pc. The Greek stabilisation is a mirage.

Portugal pushed closer to the brink

Portugal’s borrowing costs have spiked dramatically after key political parties failed to agree on a national salvation front, raising the risk of a snap election and an anti-austerity revolt.

Yields on 10-year Portuguese bonds jumped more than 100 basis points to 7.85pc in a day of turmoil, kicked off by a government request to delay the next review of the country’s EU-IMF Troika bail-out until August.

The unemployment gap between the US and eurozone states will reach the highest levels in modern history next year, according to a report by the OECD

While the US jobless rate will continue falling to 6.7pc by the end of 2014 as recovery takes hold, the rate for the EMU currency bloc will rise to a fresh record of 12.3pc with large pockets of extreme distress.

A trans-Atlantic gap of 5.6 percentage points is unprecedented in modern times and appears to reflect the starkly different policies pursued by the two major blocs since the Lehman crisis.