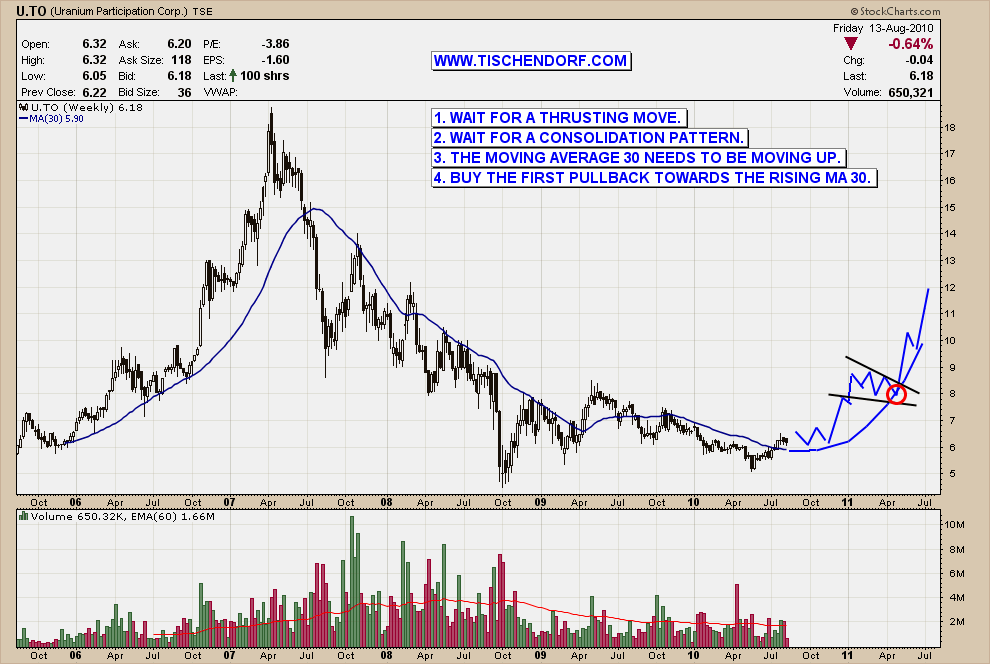 Bullish Uranium ‘We’re using something like 20 to 30% more uranium than we mine and we’re running out of sovereign and utility stockpiles”, Graphite Copper & Gold & Volatility.

Mickey Fulp, who topped the site’s list of recommended mining bloggers and newsletter writers. In this brief interview on the sidelines of the PDAC convention in Toronto, Fulp touches on gold stocks, current market volatility, and two metals he likes best right now: uranium and graphite.

Andrew Topf: I heard a lot of commentators saying at PDAC that the rally we experienced in January is looking more like a deadcat bounce. Where are we in the markets right now?
Mickey Fulp: It does look like that, but if you look at the venture exchange index it’s up 14% on the year and 2% in February, so we’ve seen a flattening of the market. A lot of that I think has to do with the price of gold, it was down $12 over the course of February. Gold really drives our market, and we were really having a good performance in gold till Bernanke did his little thing and the massive selloff came last week and the price of gold dropped $80 in one day. But anybody that’s unhappy with $1700 an ounce gold shouldn’t be in the gold mining business. There’s plenty of room for margins at $1700 gold.

Andrew Topf: You said recently that investors shouldn’t be afraid of the current volatility. So how should investors play mining stocks right now?
Mickey Fulp: In 2011 it was very common for gold to be up or down $50 in a day, same with the New York Stock Exchange, the Dow to be up 100 points or down 100 points, so that sort of volatility is often driven by fear and panic and greed. Daytraders and professional investors welcome volatility, the lay investor is the one who is intimidated by it, but from my point of view volatility gives multiple exit or entry points in a stock, so my new mantra is embrace volatility. Take emotion out of your trading and embrace the volatility and use it to your advantage.

Andrew Topf: Gold mining stocks are still lagging the price of bullion. Why is that the case and what is it going to take for the disparity to narrow?
Mickey Fulp: What’s really changed in the market is the ETFs. The Gold ETF (GLD) is now the third largest gold holder on the planet. At 2400 tons of gold, that’s a lot of gold. That’s not much less than the yearly supply of mined gold (2800 tons). What that has done for a lot of people is offered a new way to invest in the gold market. Before you either owned physical gold or you played gold stocks. Now you can hold physical gold, you can play gold stocks or you can own the ETF, so I think it’s sucked a lot of money away from the gold stocks and decreased liquidity, decreased volume and decreased prices.

Andrew Topf: You mentioned in your presentation that you like open pittable operations and insitu uranium and copper oxide projects. On the latter, is it simply the lower-cost of these operations that attract you?
Mickey Fulp: They’re environmentally benign, and they’re the lowest cost operations around. All you’re moving around is mineral-laden water and you’re actually cleaning up aquifers so they’re easier to permit, they’re quicker into production. It’s a wellfield not a hole in the ground.

Andrew Topf: How are you feeling about uranium these days?
Mickey Fulp: I remain a uranium bull and it all comes down to uranium fundamentals.We’re using something like 20 to 30% more uranium than we mine and we’re running out of sovereign and utility stockpiles, and the Russians are going to quit converting nuclear bombs to fuel, so there’s a pending shortage of uranium. What Fukushima did is it created supply disruption more than deamdd destruction so if anything the supply is going to decrease. The Germans took 8 reactors off and now 2 of them are back on. The Japanese have only 2 of 54 reactors currently producing electricity. A lot of that was because of scheduled maintenance and also stress tests and some safety upgrades. There are brownouts in Tokyo and how long can that go on? That whole northeast coast of Japan lost all its industrial capacity so there has been demand destruction but that will come back. I think they’re locked into nuclear power and so my prediction is by the end of the year a significant number of reactors will be back online.

Andrew Topf: What metals are you bullish on right now?
Mickey Fulp: Copper, gold and uranium, and I’ll put graphite into that too.
Andrew Topf: Right, graphite seems to be the belle of the ball right now.
Mickey Fulp: It is, it’s the next big thing it reminds me very much what happened with REEs in 2009. We’re building a bubble in graphite, every snake oil salesman, shark and charlatan is swimming aorund in Coal Harbor in Vanouver right now. Every Vancouver promoter is scurrying around trying to find a shell to throw a graphite project in, so it looks very much like the next big thing. Like other area and commodity plays the juniors will rush in and 95% of them will fail and the ones with good deposits and good business plans will succeed.

Andrew Topf: Do you see any issues with mining and processing graphite?
Mickey Fulp: Well, it doesn’t have any of the processing confusion that happens with the rare earths sector, it’s at all-time high prices right now, and we have a shortage of graphite particularly large flake graphite which is needed in certain applications. The Chinese who supply 70% of the world’s graphite are running out of large flake graphite so the world needs more graphite and the mining and marketing and processing are very straightforward compared to the REE sector.

Andrew Topf: But you mentioned it’s a bubble.
Mickey Fulp: Yes it is a bubble. Let’s go back to the way this business works. 95% of these companies that are listed are doing nothing more than mining the stock market. Look at the Yukon gold play. That’s last year’s story isn’t it? Ultimately there will be successes coming out of the Yukon and we were sitting here last year hearing Yukon gold Yukon gold, and they had a horrible year. We want to wash a bunch of those pretenders out. That’s the way this market works. Anything where there’s a rush in, the good companies realize at first, get the best prospects, the best deposits, then the herd comes running in and becomes the next big thing and everybody has to have an REE project or graphite project or gold play in the Yukon. They rush in and then in a year or two they rush out because they’ve been unsuccessful and then they’re on to the next big thing. The key is to get the contenders. Go in early and find the contenders.

Andrew Topf: Think there will ever be a gold mine built in the Yukon?
Mickey Fulp: Oh sure there will be one or two gold mines built out of this, but it’s a harsh place and there’s little infrastructure, so we’re looking probably 10 years down the road.

Andrew Topf is an editor at MINING.com. With a background in newspaper and trade magazine reporting, Andrew specializes in writing about mining and commodities. He has written for the Black Press newspaper chain in British Columbia, Business in Vancouver, and Baum Publications.