What’s Hot (and Not) in Early Stage Tech 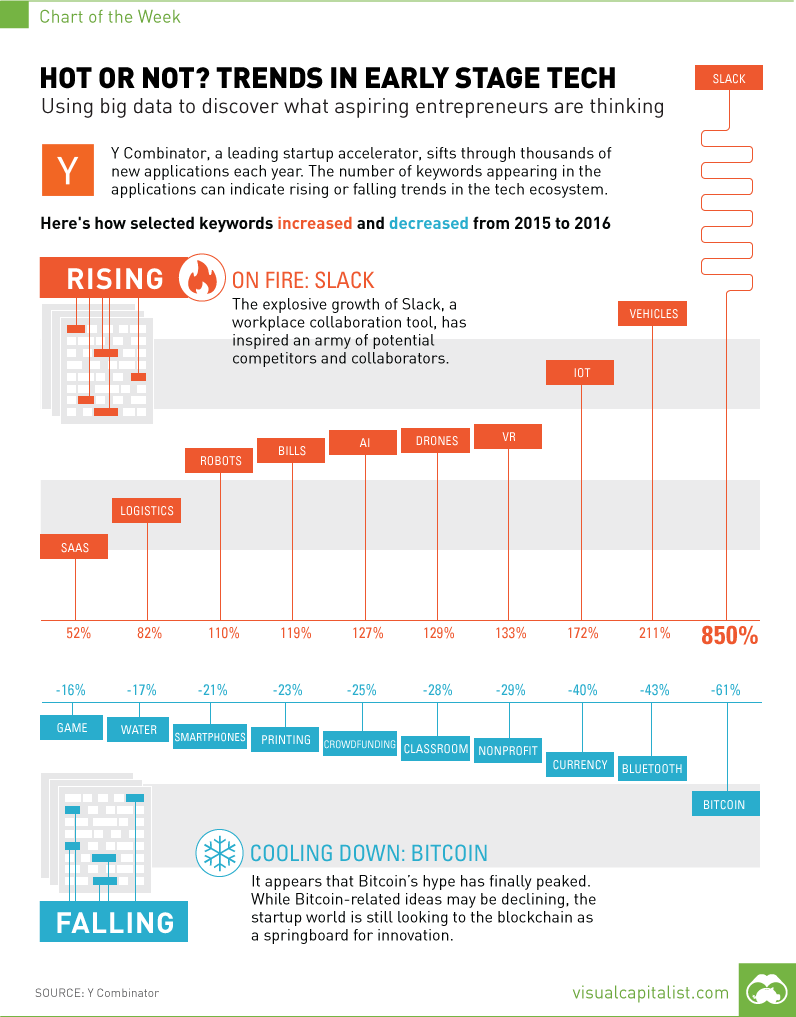 There are many ways to get a pulse on the startup scene to see what is trending. For example, one could look at the sub-sectors getting the most money from venture capitalists. The more deals and money hitting a sub-sector, the more it could be on its way up the ladder.

However, perhaps there is another angle that can tell us something, even if it’s simply confirming an already-held suspicion about trends in early stage tech. What are the entrepreneurs in the trenches doing? What are they focusing on, and how is that a change from previous time periods?

Y Combinator, arguably the most prominent startup accelerator on the planet, has indulged us on this hunch. Using the thousands of applications they get each year from aspiring entrepreneurs, they’ve had the foresight to methodically break them down by keyword to potentially show us trends within the pitches by startup founders.

For a wonderful post that breaks this all down, go to the company’s The Macro blog, which discusses many of these trends over the course of years in great detail.

That said, we decided to piggyback onto this interesting data set with a slightly different approach.

METHOD TO THE MADNESS

While the results of the keyword analysis of Y Combinator applications included many meaningful keywords, it also was cluttered with less meaningful pieces of noise. As an example, between 2015 and 2016 applications, there was a 204% increase in the use of the word “firms”. This doesn’t seem to tell us anything significant about the startup world, especially since it only went from 0.3% to 0.8% in actual usage within the scope of all applications.

To combat noise, we took the more subjective approach by identifying keywords that were more concretely associated with sub-sectors or trends. The mention of the term “IoT” in an application, for example, is more telling and suggests that an entrepreneur is pitching a startup idea related to the Internet of Things to the accelerator. More mentions of “IoT” in pitches means that ideas on the “IoT” are top of mind for aspiring entrepreneurs.

Using the above subjective methodology, here are the increases and decreases over the last year that stood out the most to us:

The word “Slack” was used 850% more often in 2016 applications, clearly related to the popular workplace collaboration tool of the same name. Slack’s explosive growth has rippled through to the startup world, likely inspiring an army of potential competitors and collaborators in the wake of their success.

Other emerging trends that picked up steam in recent applications: virtual reality (“VR”), artificial intelligence (“AI”), internet of things (“IoT”), and “drones”. The 119% increase in the usage of the word “bills” also points to the recent attention on the fintech space.

The mention of “SaaS” (Software as a Service) also increased 52%, as it has become a preferred business model by venture capitalists.

The largest decrease of all terms used was that of “Bitcoin”, which dropped 62% from one year to the next. The cryptocurrency has been a popular developer target for years, but the rush to take it mainstream may now be losing steam. The world’s top performing currency in 2015 has been called dead many times before, so it is certainly no stranger to adversity.

The word “nonprofit” was also used 29% less, which may point to the recent pressure for startups to offer a more foreseeable potential return on investment for investors. The ecosystem isn’t as frothy as it once was, and nonprofit ideas may have taken a temporary tumble as a result.