What Warren Buffett Is Buying Now… 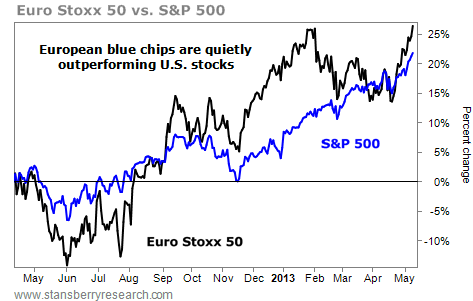 “Europe is going to be around,” Warren Buffett explained on CNBC earlier this week.

“Europe’s economic problems present a buying opportunity,” he said. “We’ve been buying some European stocks and companies in the past year.”

Since 1964, Warren Buffett has increased the book value of his holding company, Berkshire Hathaway, by 587,000%. That’s enough to turn a $10,000 investment into nearly $60 million. The guy knows how to make money in the markets.

You might not be ready to buy Europe. But you can make some real money here… so you need to understand this opportunity.

Over the past year, a certain group of European stocks have outperformed their U.S. counterparts. What’s more… even after that run, they are still a better value than U.S. stocks today.

So based on history, we still have an excellent opportunity to get in this trade.

Last April, when I updated DailyWealth readers on this opportunity, Europe was a mess. Greece was in the process of yet another bailout. And several European countries were already in recession. In short, there were plenty of reasons to be afraid of Europe. But that is often the best time to buy…

Since then, the group of European blue chips I discussed – the Euro Stoxx 50 Index – actually outperformed the S&P 500. Take a look… The Euro Stoxx 50 Index is up 26% in just over a year. You won’t read about it in the news, but that beats the 22% return in the S&P 500 over the same period. And importantly, we still have a great opportunity to buy today.

These European blue chips are also cheaper than the U.S. and other major world stock markets based on just about every measure. Take a look…

The companies in this fund will still do business and make money, no matter what. They’re cheap – a much better deal than U.S. stocks. And even with Europe’s troubles, they’ve soared. We have an uptrend here.

So what are you waiting for?

If you don’t own them already, it’s time to join one of the greatest investors in history and buy European stocks.

In August, Brett urged readers to take advantage of “a possible 55% gain in 19 months with European stocks.” If you took his advice, you’re about halfway there in just eight months.

If you still can’t stand the thought of owning European stocks, Dr. David Eifrig shows you another super-safe way to diversify. “For folks worried about diversifying their assets out of U.S. dollars, this is one of the greatest ideas in the world…” Get the details here.