WHAT TURBULENT TIMES MEAN FOR GOLD 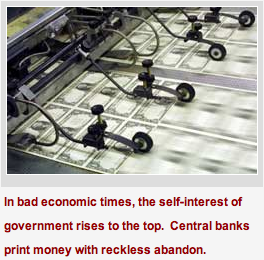 I hope you had a wonderful Thanksgiving weekend with family and friends. I did!

But now, it’s back to work. It’s back to protecting and growing your wealth. As we come closer to 2014, that’s more important than ever.

The chief reason — and I’ll keep harping on this until I’m blue in the face — is the ramping up of the war cycles.

And if you are not careful and open-minded, they are going to destroy your wealth.

Let’s get something straight. I am not a pessimist. I am not an “end of the world” analyst. I am simply a historian, steeped in how governments and markets are cyclical in nature, and how those who don’t learn from history are doomed to repeat the mistakes of the past.

The war cycles are real. They are documented and scientifically proven and based on over 14,000 wars spanning 5,000 years of civilization. I have studied them in great detail. They are ramping up big time and they will have a profound impact on everything.

What is behind the war cycles? What drives society and the world to enter turbulent times?

There are two forces: The private economy and the public sector (government).

In the best of times, when the interests of the private and public sectors are aligned, you get as close a partnership as you can.

But in the worst of times, when the underlying economy goes into a bust period, as it has been doing since the year 2000 — you get a divide between the public and the private sectors.

It may seem that their interests are still aligned. After all, both the government and the private sector want the economy to get back on track, employment to rise again and everything to be A-OK. But in bad economic times, the self-interest of government rises to the top. Seeing diminished revenues and unable to curtail spending, governments start to go broke. As they go broke, they turn against their citizens and seek more ways to soak money from them while at the same time cutting and even reneging on promises.

As the tensions mount between the public and private sectors, protests erupt. There are tax revolts. Riots in the streets. Secession movements. Civil strife.

Natural-resource wars intensify. Religious battles intensify. And if leaders don’t act appropriately — which they almost never do — all hell can break loose, leading to domestic and international conflict.

Front and center is none other than your wealth. The purchasing power of your money. The life of hard work you devoted to your family and its financial security. Your liberties. Your privacy.

For in the end, bankrupt governments want to grab your money to make themselves whole.

They engage in propaganda and desperate socialist moves to spread the wealth in some utopian vision of the world that is really nothing more than grabbing everyone’s wealth to feed a monster that is going belly up.

In each and every one of those instances, and countless others, government crossed the line and invaded the private sector first, confiscating wealth to pay for its mistakes to desperately try and survive.

In times like those — the times we are now entering — the single best thing you can do is to think independently.

Question everything governments say and do. They will be acting entirely out of self-interest. They will deceive you, lie to you, all the while they are reaching into your back pocket to grab what they think is theirs.

Fortunately, today we have a slew of liquid markets where you can protect yourself and even grow your money. But, again, it all depends on your ability to think for yourself.

Case in point: Germany. Remember last January when Germany announced it was repatriating its gold from the New York Fed to take it back to Germany?

Back then, almost every analyst and gold investor on the planet said that was the most bullish news for gold they had heard in a while. That it would set gold on a trajectory to much higher prices.

And I was right. Twice this year, Germany’s central bank dumped gold. Why? Because it needs the cash to help bail out the weaker European countries that are going bankrupt.

Another case in point: Obamacare. A noble effort to provide health care to every American.

But as we now know, it’s nothing more than another tax on your wealth. A tax that is coupled with 16,000 new IRS agents hired to monitor Obamacare. But, in reality, agents who will be able to eavesdrop and stick their nose into everything you do.

NSA spying on all Americans? How many times have you heard that it’s designed to protect you? Nothing could be further from the truth. A government that protects its citizens never eavesdrops on them, except those it suspects have terrorist ties.

Or look at Angela Merkel’s recent move ? outlawing all referendums in Germany under the guise of a better, more productive government, when in reality, it’s nothing more than a dictatorial power grab.

Nothing is ever as it seems in the halls of government. That’s true even in the best of times.

In the weeks, months and years ahead — reading between the lines of what governments are doing and saying on both sides of the Atlantic will be far more important than deciphering economic statistics or central bank monetary policy.

Keep your eye on gold. It is now heading into a January low. Once it bottoms, take that as your sign that the war cycles will be ramping up big time.

Too Much Oil: U.S. Storage Set to Pass the 400 Million Threshold

Triple-Digit Gains Are on Tap for This Investment, History Shows