What the Markets are telling us about the Economy 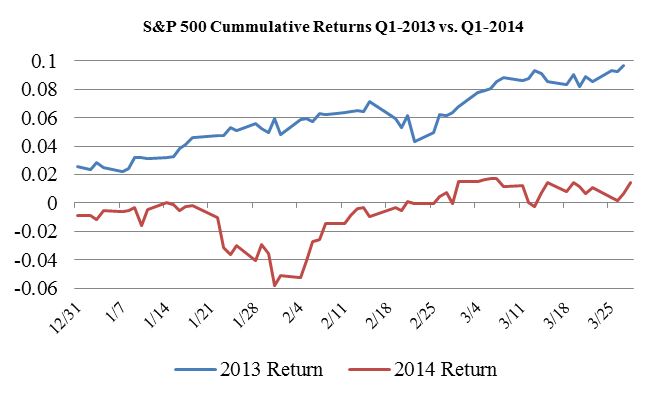 Friday’s US payroll numbers revealed a key milestone for the US labour market. Private employer payrolls surged to 116.09 million positions, a level not surpassed since January of 2008. That confirms two key factors about the economy. One, the US labour market continues on its path of modest gains as more Americans rejoin the labour force each month. Two, the slump through the first quarter of this year was in large part weather related and looks to be short-lived. In essence, this is exactly what the markets have told us as the S&P 500 gained a modest 1.3 per cent in the first quarter of 2014 verses 10.03 percent in the quarter a year prior. The US labour market however, isn’t on a clear path to prosperity just yet. Population growth alone has seen an increase of 2 million American workers since 2008. And given the budget cuts and trimming of positions at government agencies, private payrolls are yet to pick up the slack created by the public sector. Although its easy to find optimism each month as the broader market shows signs of improving, there are the unavoidable facts that 3.7 million of 10.5 million unemployed Americans have been out of work for 6 months or longer, and 7.4 million Americans are working part time, but would prefer full time hours.

It’s the structural problems of the US economy that continue to exhibit investors’ uncertainty, and that is what is leading to the volatility of these markets. As many leading analysts seemed to suggest, 2014 would be a much more volatile year than 2013, and as the chart indicates, the first quarter of 2014 was rather directionless. Moreover, it was with that forecasted volatility that the market finished the quarter within a per cent of where it started.

The real question going forward this year surrounds what path policy makers, particularly at the US Federal Reserve, but also in Washington, will take. Without doubt accommodative monetary policy has been what directed these markets since 2009. Recent developments at the Fed, however, indicated Janet Yellen’s direction to be slightly unclear as her message has wavered between being hawkish to dovish. Furthermore, one of the leading voices on financial stability, Harvard’s Jeremy Stein resigned his seat as a Fed Governor this week. This is the third vacancy to be filled at the US Fed this year, and certainly opens up the possibility for a more accommodative tone, as it is the Fed Governors that dictate policy as they carry the majority of the votes on Federal Open Market Committee.

To make investors jobs more difficult, Washington kicks into campaign mode for the 2014 mid-term elections, and there are two probable outcomes. One is where Obama continues his lame duck presidency with strong Republican opposition, or a Democrat majority that support his anti-business agenda. Either scenario doesn’t really provide optimism for robust economic growth. Instead, more of the same moderate advances should be expected from the economy.

And this returns us back to the likely scenario of stock market volatility. The Fed has played a role in maintaining a steady hand for their unconditional support for the US economy. That is now being questioned. If the Fed choses to subside their proactive role in providing a predetermined level of assistance, investors may very well lose confidence in these markets, and they shouldn’t expect Washington to fill that void.

« Back to Weekly Updates
All investments contain risks and may lose value. This material is the opinion of its author(s) and is not the opinion of Border Gold Corp. This material is shared for informational purposes only. Information contained herein has been obtained from sources believed to be reliable, but not guaranteed.  No part of this article may be reproduced in any form, or referred to in any other publication, without express written permission.  Border Gold Corp. (BGC) is a privately owned company located near Vancouver, BC. ©2012, BGC.