What the End of QE3 Really Means 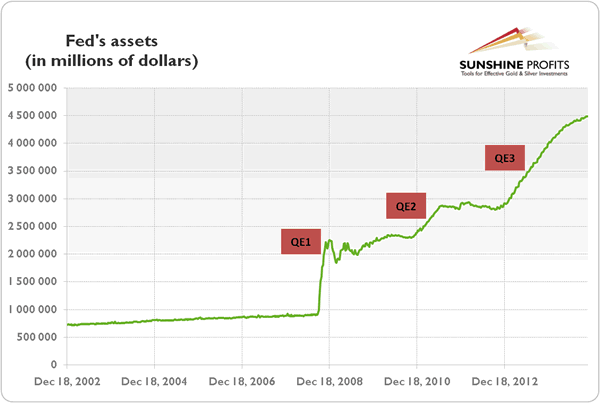 So it finally happened. The Federal Reserve ended its Quantitative Easing program on October 29, 2014 due to concerns that keeping QE for so long could fuel excessive risk-taking by investors. The U.S. dollar continued to conquer new heights, while gold did not welcome this central bank action. Its price fell in November to $1,142, a four-year low. This is not surprising given the fact that as we wrote (in the last Market Overview), the condition of the U.S. dollar is one of the most important drivers of gold prices.

However, the future (in the medium term) of the yellow metal’s price in the post-QE world is unclear. So much is unknown. When will Fed hike the interest rates? Is the U.S. central bank going to get rid of the enormous level of assets it bought? How and when does it plan to do so? How will the financial market perform without stimulus? Is the end of QE really a sign of a strong U.S. recovery? Some analysts agree, forecasting that gold will fall towards the $800-$900 level, while other economists fear that without Fed’s bond-buying program, a market crash may be on its way, leading to renewed investors’ interest in gold.

As a result, markets are confused right now. In this edition of Market Overview we try to clarify concerns about the impact of the end of QE3 on the U.S. economy and gold market. But first, let’s analyze what the recent halt of QE really means.

The quantitative easing was an unconventional monetary policy of buying financial assets from commercial banks. It increased the monetary base, Fed’s balance sheet and prices of purchased assets, decreasing their yields. The third, and for now the last, round of quantitative easing was announced on September 13, 2012 without stating the end date. Initially, the program involved purchases of agency mortgage-backed securities at a pace of $40 billion per month, but was extended to purchases of Treasuries involving $45 billion per month. In this largest asset-buying program, the Fed purchased assets worth around $1.6 trillion, expanding its balance sheet to about $4.5 trillion. Theoretically, the halt of QE3 means the end of the multi-year asset purchases. However, not completely, because the “Committee is maintaining its existing policy of reinvesting principal payments from its holdings of agency debt and agency mortgage-backed securities in agency mortgage-backed securities and of rolling over maturing Treasury securities at auction,” as seen in the statement released by the Fed on October 29, 2014. It implies that although the Fed discontinued expanding its balance sheet, it will not allow it to shrink, at least for some time. And we are not talking about small amounts. According to Treasury Borrowing Advisory Committee estimates, if the Fed decides not to roll Treasuries (large amounts of them start maturing in 2016) over into new debt, the Treasury would be forced to borrow an extra $675 billion from the public over a three-year period. Therefore, the end of QE3 does not imply the end of quantitative easing. To use a metaphor, ending QE is not putting on the brakes; it is just easing off the accelerator.

However, even the complete reversal of QE3 would not mean the abandonment of the quantitative easing concept. The asset-buying program has become an established part of the Fed’s policy that could be implemented again in times of crises. Fed Chairwoman Janet Yellen has already said explicitly that she would not rule out more assets buying if needed. It is not coincidence that we have witnessed three rounds of the quantitative easing. We hope you remember that after the end of QE1 in March, 2010, there was a substantial correction in stocks (just under 20%), leading the U.S. central bank to start QE2. Then, after the halt of QE2 in June, 2012, there was another important stock market decline (about 20%), and that was the reason why the Fed launched the third round of QE. Given the fragile nature of the global economy, if asset prices fall or economic growth falters, we could witness QE4, especially since the Fed’s actions are data driven.