What Investors Can Learn from Gold Priced in Yen? 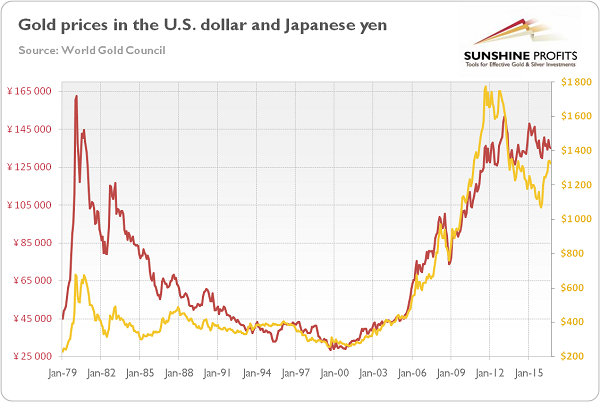 Our Market Overview would be incomplete without remarks about gold priced in the Japanese yen. Chart 1 shows nominal gold prices denominated both in the U.S. dollar and the Japanese currency, while Chart 2 plots the indices of gold prices in these two currencies. As one can see, gold prices denominated in the greenback and the yen often move together. There were only two significant divergences in the relative performance of gold priced in the U.S. dollar versus gold prices in the yen. The first case occurred in the 1980s, when the yen strengthened against the greenback, leading to strong declines in yen-denominated gold prices. The second case started in mid-2014. In the second half of that year, gold priced in yen has outperformed its dollar cousin due to the strength of the greenback against the yen and the decline in Japanese real interest rates. However, in 2016 the U.S. dollar depreciated against the Japanese currency, which led to the underperformance of the yen-denominated gold prices. The reason may be the Fed being more-dovish-than-expected and the rising conviction that the Bank of Japan has been approaching the limits of monetary easing. Indeed, the introduction of negative interest rates in January and changes in the monetary policy framework in September have largely failed to weaken the yen, as investors judged that these actions implied that the BoJ had little scope to ease policy further. Such a belief diminished the perceived divergence in monetary policies between the Fed and the BoJ, which supported the gold market this year. Let’s analyze the chart below which plots gold prices against the balance sheets of the Fed and the BoJ, showing the divergence in the monetary pumping. As one can see, there is no clear correlation between gold prices and central banks’ total assets. However, the price of gold entered the bear market period at the end of 2012 when the BoJ adopted a more aggressive stance associated with Abenomics and the growth of its monetary base accelerated.

Looking forward, we expect that the divergence in monetary policy between the Fed and the BoJ will persist, supporting the U.S. dollar. The divergence has receded somewhat this year as the Fed has dialed back expectations for the pace of rising interest rates, however it may return to the spotlight in December when the Fed may hike interest rates, while the ECB and the BoJ would probably continue to loosen their monetary policies. Indeed, the BoJ left the possibility of more asset purchases and further interest rates cuts – at the press conference after its September meeting, Kuroda said:

“We won’t hesitate to adjust monetary policy with an eye on economic and price developments. “We will ease further when necessary. We can cut short-term rates, lower the long-term rate target, buy more assets or if conditions warrant, accelerate the pace of expansion in monetary base. There’s room to ease further with the three dimensions of quantity and quality of assets as well as interest rates.”

It goes without saying that a strong dovish statement from the BoJ could weaken the yen and strengthen the U.S. dollar, which would be negative for the price of gold. In a scenario of the broadening divergence in monetary policy between the major central banks, investing in gold priced in the yen (or the euro) would be a smarter choice than investing in gold priced in the U.S. dollar. Naturally, there is only one “gold” that can be purchased and the above simply means that those who hold the euro or yen and use it for purchasing gold, will likely benefit more (vs. the value of these currencies) than those, who hold the US dollars.