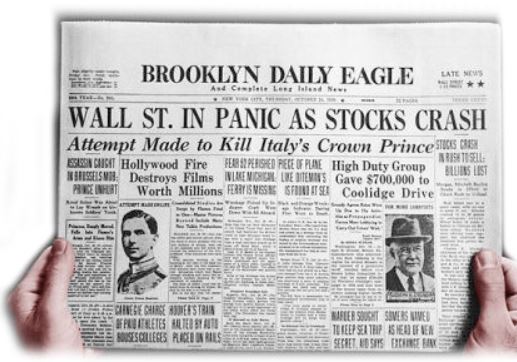 But there are questions that every one of us should be asking.

I bumped into a woman today while grocery shopping. Don’t worry, it was a light bump and she started it. She recognized me despite looking like I was on my way to the operating room and asked if it was OK to ask me about a few investment and economic questions.

I said, “sure, but my experience is that people are interested in brief, superficial answers to the deep structural variables that are driving social, economic and financial changes.”

The problem is, if you don’t at least have an inkling about these historic changes you have absolutely no chance of understanding what’s been happening, and more importantly, what’s going to happen – until it hits you right between the eyes financially.

So what does historic change look like anyway? Well, how about the central banks taking over private banking in some countries, or the break-up of some nations as regionalism grows at the subnational level?

The other big obstacle most people have to overcome is a tendency to politicize any discussion, which misses the whole point. For example, the US municipal and state pension crisis is coming whether Trump or Biden won. Whatever party you support or is in power will make no difference in the face of up to $277 trillion in global debt. The size of that global debt, including the $500 billion in provincial and federal deficit Canada is adding this year, has consequences regardless of your political preferences.

The big question – make that the question of a lifetime – is how is it going to play out? What are the consequences of the massive debt build-up?

Getting that answer right will literally determine your investment success going forward, but also your standard of living.

How are governments going to handle debt of this magnitude? We’ve already seen the first answer and that is central banks will buy up the debt. Then the question becomes what does the financial world look like if they continue and what does it look like if they’re not successful in controlling those markets?

The second answer is more straightforward. Interest rates will go through the roof. Government finances will be destroyed. Private sector bankruptcies in some industries will overwhelm much of the banking sector and those people who have lots of debt will be in big trouble. It would also be massively deflationary with asset prices taking a huge dive.

Not a nice prospect, which is precisely why the central banks have pumped trillions of dollars into the credit markets to keep them functioning since mid September 2019. The pandemic just exacerbated the problem. Let me give you an example of how aggressive the central banks have been. Between March and the end of May, the US Federal Reserve bought about $2.3 trillion worth of government bonds and asset backed securities while promising to buy an unlimited amount of virtually every other kind of debt. In Canada, the central bank bought about $400 billion worth of government debt and mortgage backed securities while promising to buy a boatload of provincial and corporate bonds if needed.

I could give you other examples from around the world but you get the idea. And there’s no end in sight, so determining the consequences is key. What does the financial world look like and what are the implications for you personally as this program of creating trillions of dollars out of thin air continues?

Alternatively, let me share one example of a consequence that could make you a lot of money. About 18 months ago, without much company, I thought one of the major consequences of the massive debt build-up was that it could form the foundation of a new commodity bull market, which is why we kicked off last year’s World Outlook Financial Conference with a special section called, “The Coming Commodity Bull Market.”

I now feel even stronger about the 3 to 5 year prospects for commodities than I did last year. That’s mainly because, while we talked about the pandemic and Martin Armstrong warned about the panic selling that would hit stocks starting in the last week in February with a bottom coming on March 23rd, I never anticipated the unprecedented amount of money the Feds and other central banks would be willing to create – i.e. Unlimited.

(By the way, the Armstrong model’s call for a bottom on March 23rd – made months in advance – was amazing. He’ll be back at this year’s Conference in February and I have a lot of questions about stocks, gold, base metals, the US and Cdn dollars.)

One of the principal consequences of this level of money creation is that all paper currencies will be devalued against not just gold and silver but also base metals like copper, zinc, nickel. They’re all up quite bit since last year’s Outlook Conference – but I think commodities have got a lot further to go because of the massive proposed infrastructure spending and the renewal energy revolution. Both mean huge increases in demand for aluminum, copper, iron ore, copper, silver, nickel, cobalt, graphite etc. etc.

Let me share one question that you’ll hear at the 2021 Outlook Conference next month but I doubt you’ll hear anywhere else. And that is – will high “in demand” commodities like copper be seen as a better way to hedge against the debasement of paper currencies than gold…maybe even Bitcoin?

For the record, Mark Leibovit recommended Bitcoin at last year’s conference when it was $10,000 (now $34,000). Note: I didn’t buy any. I’m too old school – and now I’m just too old to take the risk of government intervention. I worry that governments won’t like anyone else honing in on their currency monopoly but we’ll see. My guess is that governments will start adding regulatory restrictions – like you must report your Bitcoin holdings three times a year – in order to diminish the attraction of crypto currencies. It’s obvious that this environment is all about more government control and that’s the major risk to crypto currencies.

Sorry, I’m digressing from the more important questions surrounding how do we protect ourselves in this kind of environment. For example, I think there’s a growing probability governments will mandate that pools of capital like the Canada Pension and other pensions are forced to buy Government bonds in order to finance spending.

Who knows for sure, but that’s my point. There’s a ton of uncertainty as we navigate through this period of historic change.

Our goal is straightforward. We want to protect you from the changes that are coming as well as profit from them. That’s why I am so pleased with the performance of our recommendations at last year’s Conference. The 2020 World Outlook Conference Small Cap Portfolio is up 27%. Pretty good, but that’s not nearly as good as the 2019 WOFC Small Cap Portfolio which is up 220%.

Obviously, that’s spectacular but there are lots of other winners. At last year’s conference we went big into renewable energy with Nuveen ESG ETF up 50%, Investco Solar ETF up 103%, Investco Wind ETF up 210% and Ballard Power up to 207%. There are other big winners but you get the idea – it was a heck of a year. And I’m certainly not suggesting that kind of performance can be repeated, but at the same time, we put the odds in our favour by having speakers like Greg Weldon, BT Global’s Paul Beatty, Investment Strategist extraordinaire Dr James Thorne, and RAI Advisor’s Chief Strategist, Lance Roberts.

In case you haven’t guessed by now, I want you to join us at this year’s Conference.

Maybe one of the best calls we made in the last year was when, sitting around in June, we all agreed there was no way we’d be filling a room with 1200 people for the 2021 World Outlook Financial Conference like other years. Wasn’t that tough to predict a second wave given November through March is called the flu season.

So this year’s conference is online. No travel, no parking, no wardrobe decisions and instant access to your fridge. And you won’t just be able to watch the Conference broadcast on February 5 and 6th but you’ll also be able to review every part of the conference for months afterwards. Plus we’re able to feature more analysts given there’s no room size restrictions or travel considerations.

I’m really looking forward to it. I am absolutely sincere when I say that I’d pay to hear the recommendations of any one of our analysts – let alone the whole group. I know what some of them get paid to privately consult for mutual funds, investment firms and pension funds – and I can say with 100% certainty that the access pass to the 2021 World Outlook Financial Conference is a heck of a deal.

But you decide. After decades of broadcasting I certainly understand that a lot of people aren’t interested in economics or even their personal finances, (too bad so many work in the media.) As the old saying goes – “change brings opportunity”, and it sure as heck helps to know what’s coming.
.
I hope you and your family are doing as well as can be expected in what author, Christopher Kock describes as “the year of living dangerously.”