What Happens When the Surf Is Down – Contemplating Stocks without QE 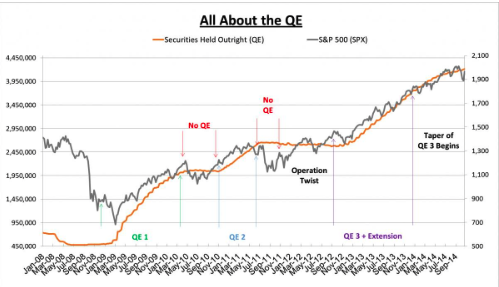 Some influences on the stock market are casual, subtle or open to interpretation, but the catalyst behind the current stock market rally really shouldn’t be controversial. As far as stocks go, we have lived by QE. The only question now is, whether we will die without it.
Since the financial crisis of 2008 stock prices have only risen when the Fed is either expanding its balance sheet, hinting that it will soon do so, or actively recycling assets to hold down long term interest rates. Absent any of these aggressive moves, stocks have shown a clear tendency to fall. Curiously, while most investors now believe that QE is in the past, and that the Fed will not even be hinting at a restart, few would argue that the current bull market is in danger. But a quick look at how much influence the Fed’s operations have had on market performance should send a chill down Wall Street. The Chart below should speak for itself: The day after the Fed announced the end of QE 3, Paul Richards, the head of FX for UBS said on CNBC that he is “so bullish on stocks that it hurts.” One wonders if he had ever seen a chart like the one produced for this article. But Mr. Richards is not far off from the vast majority of U.S. stock analysts who see clear sailing ahead.
To reach that conclusion, one must completely ignore not only the role QE played in driving up stock prices, but discount any negative effects that a reduction of the Fed’s balance sheet could create. Most economists recognize that to normalize policy the Fed must reduce the amount of securities it holds. This will be an environment that we have never encountered. Logical analysis should lead you to believe that stocks would not fare well. But logic is not welcome on Wall Street.
The bottom line is that stocks should be expected to fall without QE. But this does not mean I predict a crash in stocks. I simply expect, as no one else seems to, that the Fed will go back to the well as soon as the markets scream loud enough for support. At that point, it should become clear to everyone that there is no exit from the era of QE and that there is nothing normal or organic about the current rally. At that point, the asset classes that have been ignored and ridiculed should have their day in the sun.