What Earnings Season Will Tell Us About Oil Prices 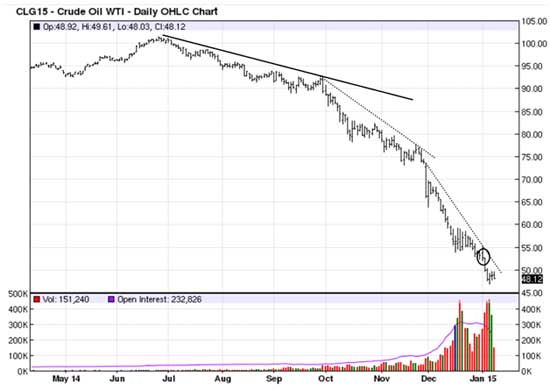 Although many energy stocks are starting to stabilize, oil has yet to find a bottom and base. Most analysts agree that, in the short run, oil prices may go lower.

However, longer-term demand increases and cuts in capital spending and production will eventually cut supplies. After all, companies just can’t spend and produce like they did when prices were $100 per barrel — now, those are below $50, and their costs remain above $50.

This means that, ultimately, production will decline, especially from the U.S. and Canada. We are already hearing about big layoffs in this space.

It’s not the first time we’ve seen this boom-bust story before, and it won’t be the last. Yet, this certainly creates opportunities for investors.

We’re Not There Yet. But
Are We Getting Closer?

I have my commodity brokerage license, and used to work at a famous, managed futures firm. So, I can tell you firsthand that futures managers and speculators think and act very differently than investors.

Here’s a simple difference: Individual investors generally focus on fundamentals, while technicals are more important to futures participants than fundamentals.

So today let’s take a look at …

What Futures Traders See for Oil

Fundamentally, there is a global surplus of about 3%, but prices are down over 50%. With this relatively small surplus, on a fundamental basis, prices should be at $70 to $80, and not below $50.

Yet, as evidenced by the acceleration in the price decline, the technicals are bearish, which means the futures traders are in control. If prices held at the $40 area for a sustained period, then oil production would have a high probability of being shut down.

Then, supply and demand would be in equilibrium, with a chance of having shortages.

Now, notice the surge in trading volume on the chart — and most of it selling. Longs were probably forced out due to margin calls as well as shorts being added.

We also saw two big days of buying which may be short-covering. But, we can see most of the volume is selling, and some of that are probably the shorts. When prices reverse eventually, these shorts will have to cover to take profits to avoid losses.

What Earnings Season Will Tell Us About Oil Prices

Oil prices at the end of 2014 are important, as companies that can’t produce economically at those prices or below will have to write down those reserves. will write more about this after earnings season when we can see the impact on income statements and balance sheets.

Also, we still have to be concerned about the Saudis and OPEC, as they can still talk down prices and produce more oil (not much more).

I will write more about this once we understand what will be the production cuts in the U.S. and Canada. Most capital spending and production cuts will be announced during earnings seasons.

Some companies are announcing capital spending cuts before earnings season. At $50 oil, there is sure to be more cuts.

Currently, the Saudis are reducing discounts to certain customers and raising prices for others.

One of the good things about this bear market in energy is that now we can own higher-quality companies with better management, reserves and fundamentals — especially balance sheets.

Previously, these companies were more expensive and would probably not be bought out. I prefer investing in companies that have the potential to be acquired.

I recently recommended such a company, EOG Resources (EOG).

Below is a current chart: As you know, I have been writing about how energy stocks need to find a bottom and base, but EOG found a bottom in October and has been basing ever since, despite the continued fall in prices.

This is a bullish sign for EOG. Most basing periods last about seven months.

Remember, bases are like diving boards: The longer the board, the greater the next move.

I will probably trade the basing range several times (support $84, resistance $97.50) for the next few months until oil prices find a bottom.

It is normal during a basing period for prices to test support, or even make a new low. This could happen to EOG if oil prices fall to $45 and especially if prices fell to $40. In October through November, XOP was starting to base and had a bullish ascending triangle as participants were buying the pullbacks.

But, once OPEC announced that it would not support prices, most energy stocks took another leg down.

Prices are starting to base again, but with oil prices still bearish, energy stocks could possibly get another leg down — creating even better bargains.

There is still downside risk with energy stocks, but the upside is much greater.

We have to be patient and let oil prices find a bottom.

I have listed many catalysts for oil and energy stocks to move higher. These are worth listing again. Take a look:

Once oil has found a bottom and starts to base, it will be time to add to existing positions to bring down the cost-per-share basis, or to initiate new ones.

Remember, a base is like a diving board: the longer the diving board, the better and bigger the bounce. So, when prices start to settle and gain some traction, get your shopping list ready because that’s when it will be time to buy again.