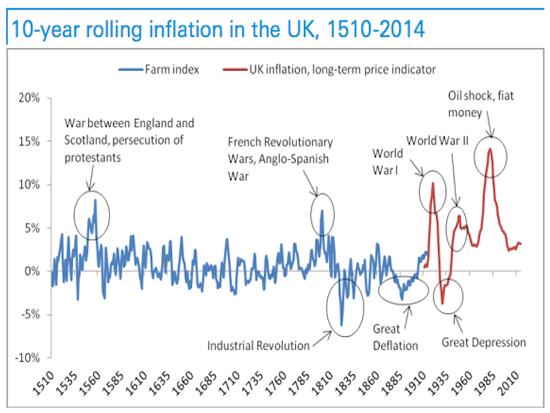 Business Insider just posted a Deutsche Bank chart that illustrates the difference between life under the Classical Gold Standard and today’s “modern” forms of money. It’s for the UK only but is a pretty good representation of the world in general: For the first four hundred years depicted here, money was gold and silver — the quantity of which rose at roughly the same rate as the human population. Prices during that time fluctuated, but only modestly by today’s standards, and they always returned to more-or-less the same level. In other words, money held its value for not just years but centuries. It was a fixed aspect of the financial environment and was therefore not a tool of economic policy. Governments and individuals had to adapt to unchanging money rather than forcing money to adapt to political circumstances.

A phase change occurs in the 20th century when the US created the Federal Reserve and World Wars I and II placed survival above monetary stability for most of Europe and Asia. Violent swings in the value of money became the norm, and with the subsequent worldwide adoption of fiat currencies — which governments can create at will — volatility has soared.

Clearly, something bad has happened — and just as clearly something really bad is coming. The question is what. Inflation and deflation both have their articulate proponents, many of whom (adding yet another layer of complexity) expect both but disagree on the order in which they’ll occur. See here, here, here, and here. This is a fascinating debate, with huge implications for personal financial planning. We all have to choose a side with our investments, and the risks and potential rewards have never been higher.

The follow-on question is also fascinating: What do we use for money once fiat currencies inevitably fail? Will central banks adopt some version of Milton Friedman’s computer that increases the supply of base money by a pre-set amount each year, removing the temptation to inflate? Will cyber-currencies like bitcoin turn out to be secure enough to gain worldwide acceptance, eliminating the need for underlying physical reserves? Is a high-tech gold standard possible, in which physical bullion backs an electronic currency that circulates in place of unbacked fiat currencies? Again, this is interesting in its own right but crucially important for everyone with money to invest. Stay tuned.