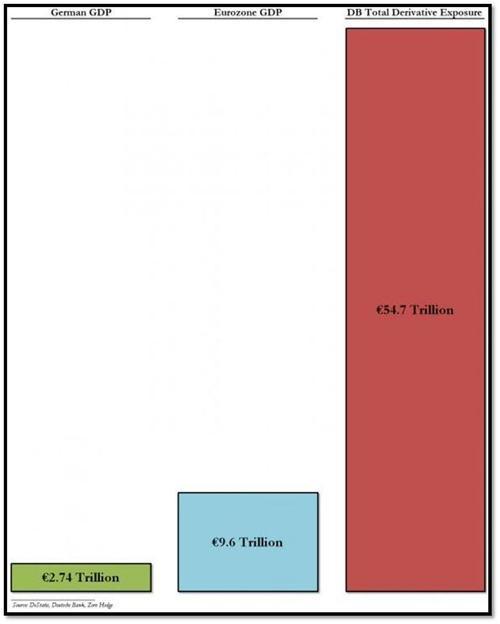 Calling Wall Street’s banks stupid and dangerous is like calling the sun “big and warm.” It’s a clear understatement of an obvious fact. The same goes for calling Japan and China economically clueless. Their actions pretty much guarantee that they’ll ultimately enter some sort of death spiral.

Germany, meanwhile, is many things, but clueless and stupid aren’t normally on the list. So why is that country’s biggest bank causing nightmares for global policy makers and investors? Because – in a sign of just how close we are to the end of the fiat currency/fractional reserve banking era – Deutsche Bank is behaving in ways that would make executives at Lehman Brothers and Bear Stearns step back in alarm. It seems, for example, to have become a derivatives junkie. Like a Vegas high-roller who can’t stop raising his bets, DB’s exposure to this unregulated, largely off-balance-sheet market now exceeds not just its host country’s GDP, but that of its entire continent: And it recently joined its Wall Street cousins-in-crime by attracting a $14 billion fine for mortgage fraud. This amount seems puny next to a trillions-with-a-T derivatives book, but it’s enough to force DB to raise capital at an extremely inauspicious time. Here’s an excerpt from a Bloomberg article on the bank’s — and Germany’s — plight:

Deutsche Bank’s Pain Is Germany’s Too

Berlin is trying to distance itself from Deutsche Bank and the threat of a $14 billion U.S. fine that would likely force the bank to raise capital.

This makes sense politically ahead of an election year. It also, effectively, calls the U.S. authorities’ bluff: if the fine is too big, German taxpayers won’t step in to help.

But the danger is that deepening investor concerns over the health of the country’s No. 1 bank spiral out of control — and circle right back to Berlin.

As unpalatable as it may be politically, the market sees Germany and Deutsche as joined at the hip.

You can see it in Deutsche Bank’s share price: it plumbed a record low on Monday after Focus magazine has reported Chancellor Angela Merkel ruled out state aid for the lender ahead of next year’s elections.

You can also see it in the lender’s credit-default swaps: both the German five-year sovereign CDS and Deutsche Banks’s five-year CDS have risen in tandem over past weeks.

Even Deutsche Bank’s own executives have commented on it. It’s almost a year to the day since Stefan Krause, then a member of the bank’s management board, noted how investors confused the lender with the Bundesbank and therefore saw “there was always an implicit state guarantee” when giving the bank funding.

Deutsche Bank is a truly systemic bank with about $2 trillion in assets, about two-thirds of Germany’s entire annual output. The weaker it becomes, the more investors will expect its home country to be on the hook.

Deutsche Bank said it’s determined to manage on its own and a capital increase isn’t currently on its agenda. Merkel’s government is attempting to stay out of the fray. On Monday, her chief spokesman said there were “no grounds” for speculation over state funding.

This last sentence illustrates the severity of the problem: When a government has to deny its intention to bail out a bank, a bail-out is not just possible but highly likely.

Zero Hedge has had some fun over the past year with a chart comparing DB’s share price with that of Lehman Brothers, a Wall Street bank that eventually collapsed, setting off the 2008-2009 conflagration. Here’s the chart from this summer: And here it is after the most recent set of horrendous headlines: DB’s saga seems to be nearing some kind of resolution, with exactly zero potential happy endings. Either it crashes, taking the European and maybe global financial system down with it, or Germany nationalizes it, potentially tipping the euro, dollar and yen into chaos.

Germany at the center of a global crisis, who would’ve thought it?

also: BOJ, FOMC and Where to Now?