What a Trump Win Means for The Stock Markets? Disaster or Buying Opportunity 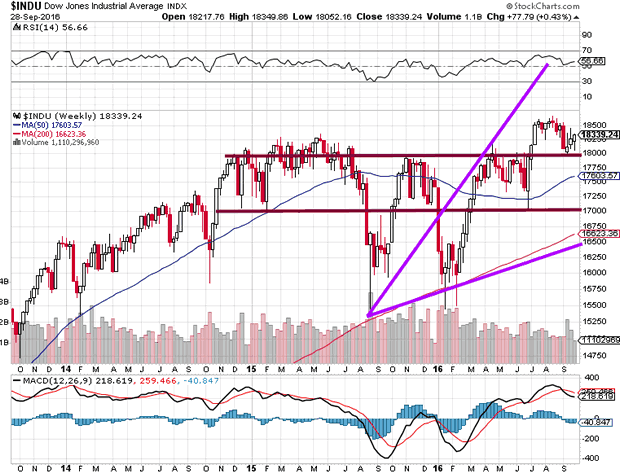 As a man handles his troubles during the day, so he goes to bed at night a General, Captain, or Private.” ~ Edgar Watson Howe

We would like to state that this article is not about politics but about the effect these two polarising individuals will have on the market.  Before the debate, the outlook was somewhat favourable towards the Donald and immediately the markets reacted and started trending lower. Regardless of what you think of Trump, he is having the same effect as Brexit had on the markets but in smaller doses. If he should win the election, then the reaction will be several magnitudes larger. When the poll results came in stating that Hillary fared better in the 1st debates the markets responded positively and recouped their losses; this reinforces our argument of several years that says substantial pullbacks should be viewed as buying opportunities.

From a  contrarian angle (and not a political point of view) a Trump win could be construed as a positive development; non-contrarians will demand to know why? Mass Psychology clearly states that the masses are always on the wrong side of the equation. A Trump win will create uncertainty, and the lemmings will flee for the exits; markets will pull back sharply and viola the same old cycle will come into play. The cycle of selling based on fear which equates to opportunity for those who refuse to allow their emotions to do the talking.

Trump is the fear factor and Hillary the stability factor; if Hillary wins the markets will rally and then pull back; as the buy, the rumour sell the news effect will kick in. A Trump will create a strong reaction which in our opinion will create a buying opportunity. Sell when the masses are euphoric (a Hillary win) and buy when the masses are pessimistic (a Trump) is the core tenet of Mass Psychology

Now let’s see what the charts are saying

Before the current pullback, we stated that the Dow was more likely to test the 18,000 ranges than trading to 20K as the media was turning too bullish, and that came to pass when the Dow traded momentarily below 18,000. After that, we expected the markets to rally towards the 19,000 plus ranges, but since Trump started to gain momentum again, uncertainty has gripped the crowds; in that sense, Trump has become the new VIX factor. The market should continue trending towards that direction, but trading significantly past 19,000 might be limited until the elections are over. Moreover, if his numbers improve, then expect strong bouts of volatility. If his numbers drop, markets will be less volatile and vice versa.

If Hillary wins, then the Dow will rally and then traders will bank their profits so we should have a decent pullback, but the reaction should be muted. If Trump wins, then there is a good chance that the Dow will crack through the first layer of support that comes into play in the 17,800-18,000 and drop all the way down to the 17,000 ranges, creating a splendid buying opportunity.

It has been a long time since this market has shed a decent amount of steam; hence, from a contrarian perspective, a trump win would provide the perfect backdrop for this market to let out an adequate dose of steam. One last thought, if the crowd panics, then the Dow could overshoot to the 16500-16,800 ranges, which would in our opinion creating a “screaming buy type” situation.

From a pure trading perspective, a Trump win would provide contrarian players with an incredibly attractive buying opportunity. Like Brexit, the crowd is bound to overreact as they stampede for the exits, creating opportunity instead of disaster. The experts were dead sure that Brexit was going to create chaos; turns out that the only mess it created was amongst the experts when they were forced to eat their rubbish. Before Brexit, we stuck to our theme that any correction should be viewed as a buying opportunity. Just as Brexit was all bark and no bite; the same phenomenon is likely to play out if Trump wins. All the Naysayers from every crack and crevice will emerge screaming the end of the world and when the world does not end they will be forced to crawl under the rock again. It would be good to keep this saying in mind if Trump wins “dance when the crowd panics and standstill when they jump up with joy”. Regarding who is the better candidate, we will let our readers make that call.

“Bad times have a scientific value. These are occasions a good learner would not miss.”~ Ralph Waldo Emerson