What a Fed Hike Means to Your Finances 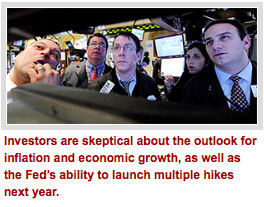 So now that we know the Federal Reserve hiked interest rates, what does it mean to your finances?

The short answer is “a lot.” But different products will behave differently now … and how they behave down the road will depend on what the Fed does in 2016. For starters, you should understand exactly what the Fed did. When the Fed “raises rates,” it doesn’t single-handedly raise every single rate in the marketplace. It raises the federal funds rate, which is an overnight rate at which banks borrow money from each other. This time it also raised the discount rate, the rate at which banks borrow directly from the Fed on a short-term basis. Both moves were 25 basis points, or a quarter of a percentage point.

Since the funds rate is a very short-term rate, it has the most direct impact on very short-term Treasuries and very short-term yields. The so-called “prime rate” moves in lock step with Fed hikes. And the 2-year Treasury note (not to mention Treasury bills with maturities of one, three, or six months) are particularly sensitive to current and future Fed moves.

Case in point: Anticipation of a Fed move had already driven the yield on the 2-year note higher. It was at 0.2% a couple years ago, but surged to and through 1% this week for the first time since 2010.

The rates on many Home Equity Lines of Credit (HELOCs) and variable-rate credit cards are tied to the prime rate. The prime rate, in turn, tends to move in lockstep with the funds rate. So you can expect your interest rates on those products to rise by a quarter-point, and the cost of carrying revolving balances on them to rise slightly.

Rates on short-term Adjustable Rate Mortgages, such as 1-year ARMs, will likely rise slightly in response to the Fed move as well. The same is true for shorter-term auto loans, though it may not be an exact one-for-one increase of 25 basis points.

What about the bread-and-butter 30-year fixed-rate mortgage? That’s where things get a bit trickier. Rates on longer-term mortgages depend much more on how the longer-term portion of the bond market reacts to this Fed move, and expectations about whether it will be followed by a series of future moves.

Investors are somewhat skeptical about the outlook for inflation and economic growth, as well as the Fed’s ability to launch multiple hikes next year. For evidence, just look at how 30-year Treasury Bond yields have behaved.

They fell from almost 4% in January 2014 to around 3% at the end of last year. Then after a brief trip all the way down to 2.25%, they’ve remained anchored around 3% for several months. As a matter of fact, on Fed day, the yield only rose one basis point. So it will clearly take increased optimism about the world economy to really get longer-term mortgage rates rising.

Want some good news? A rising funds rate puts upward pressure on the yields banks offer on Certificates of Deposit. Ditto for money market accounts and money market funds. So you can expect to earn a little more interest on your CDs and keep-safe funds.

Hopefully, this clarifies the outlook for your loans and deposit products in light of the Fed hike. When it comes to potential coping strategies, there are a handful of steps you can take:

* Consider transferring any balances you’re carrying from a variable-rate credit card to a fixed-rate one. Card companies often give you financial incentives to do so anyway.

* If you have a HELOC with a large balance on it, check to see if your bank offers a fixed-rate option. Many institutions allow you to fix the rate and payment on a portion of your balance, often at the cost of only a small fee. That move could protect you from a substantially higher interest bill if we end up getting a series of Fed rate hikes.

* Don’t lock in today’s low yields on long-term savings products like 3-, 4-, or 5-year CDs. Instead, wait to see if we’ll get more Fed hikes as that will boost the yields banks offer on them.

* Regardless of what the Fed does, consider using online-only banks for your term or money market deposits. They tend to pay higher yields because they don’t have physical infrastructure costs to cover by offering lower returns to deposit holders.

This is just a sampling of important pointers and strategies. I’ll have much more on additional post-Fed moves to consider in future columns.

I give more immediate guidance and precise “buy” and “sell” signals in my Interest Rate Speculator service. I’ve been sending out multiple recommendations in recent weeks to profit from increased turmoil in the interest-rate and equity markets, and I’d love to have you on board in light of the renewed Fed focus these days.