Welcome To The Third World, Part 21: This Pension Thing Is About To Get Real 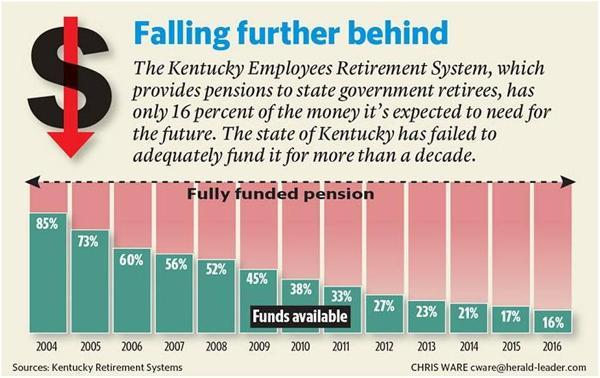 “The problem with police officers and firefighters isn’t a public-sector problem; it isn’t a problem with government; it’s a problem with the entire society. It’s what happened on Wall Street in the run-up to the subprime crisis. It’s a problem of people taking what they can, just because they can, without regard to the larger social consequences. It’s not just a coincidence that the debts of cities and states spun out of control at the same time as the debts of individual Americans. Alone in a dark room with a pile of money, Americans knew exactly what they wanted to do, from the top of the society to the bottom. They’d been conditioned to grab as much as they could, without thinking about the long-term consequences.”
― Michael Lewis, Boomerang: Travels in the New Third World

Though it may not be instantly clear, in the above quote Michael Lewis is talking about public sector pensions and how over the course of several decades, mayors and governors across the US have colluded with police, firefighter and teachers unions to promise outrageously-generous benefits and then failed to put aside enough money to pay for them.

As a consequence two things are happening. In dozens if not hundreds of cities and towns, services are being cut to the bone to pay for ballooning pension benefits, and – when even these cuts prove inadequate – pensions are being drastically reduced.

Which in turn means two other things. First, life isn’t nearly as easy or pleasant as it used to be in a lot of places, as library hours are cut, trash piles up and police response times lengthen. And second, hundreds of thousands of public sector workers who expected to retire comfortably are staring at major lifestyle shrinkage.

To which a reasonable person might yawn and say, sure the numbers look grim. But they’ve looked that way for a long time and outside of Chicago, American life is still pretty good by Greek, Venezuelan or Russian standards. So go away until something tangible actually happens.

Point taken. But this might be that time. Beginning with Dallas, where the city is actually taking money back from plan recipients…

The city has agreed to put in an additional billion dollars over 30 years, but they’re proposing a series of bitter pills to make up the rest of the nearly $4 billion shortfall.

The bitterest pill: A proposal to take back all of the interest police and firefighters earned on Deferred Option Retirement accounts, or DROP. That would amount to an additional billion dollars saved. The city is calling it an “equity adjustment.” Retirees call it an illegal “claw back.”

The city is also seeking to “equity adjustment” on cost of living increases. The city says that pension checks are about 20 percent higher than they would have been if increases had been tied to inflation.

The city’s proposing to freeze cost of living increases until it catches up to the inflation index.

…and moving on to Kentucky, where if a funding level of 16% for the state employees fund isn’t an imminent crisis, then nothing is: Things are if anything even bleaker in the private sector:

(Forbes) – There is an emerging financial crisis among multiemployer pension plans in America. These plans are a subset of private sector defined benefit pensions covering 10 million workers and retirees. Most critical are the projected bankruptcies of the Teamsters Central States and the United Mineworkers of America plans, making front page news for the last several months.

Multiemployer plans are insured by the US Federal Government’s Pension Benefit Guaranty Corporation (PBGC). But PBGC is itself in danger of going broke. Set up in 1974 to “encourage the continuation and maintenance of voluntary private defined benefit pension plans [and] provide timely and uninterrupted payment of pension benefits,” the plan uses the ultimate backstop to provide those guarantees: the U.S. taxpayer.

In the fiscal year 2015, PBGC paid out nearly $6 billion in benefits to participants of failed pension plans, increasing the agency’s deficit to $76 billion. The PBGC now has $164 billion in obligations and just $88 billion in assets.

When this was reported to Congress, it passed the Kline-Miller Multiemployer Pension Reform Act of 2014, allowing pension plans to ask permission to cut benefits to its plan participants. Prior to 2014 those plans weren’t allowed to do so. But actuaries looking into the PBGC reported that unless something was done, the PBFC itself would be broke in less than a decade.

Some other relevant headlines:

And this, remember, is happening at the tail end of a 30-year bull market in bonds and a 7-year bull market in stocks, which took the main asset classes held by pension funds to record valuation levels. So the rubber truly meets the road during the next recession when stocks will, if history is a reliable guide, drop by 20% or more. The current gaps in thousands of pension funds will become gaping holes, and the experience of Teamsters and Dallas cops will be replicated across the country.

Click here for the previous posts in this series