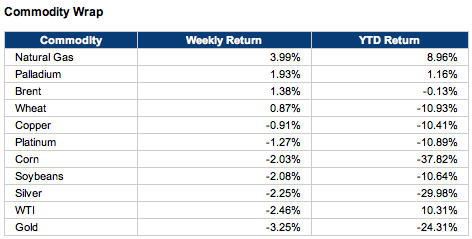 Commodities were mixed this week despite signs of progress on solving the budget showdown in Washington. Gold led all decliners; natural gas was the best performer. Stocks, as measured by the S&P 500, rose by less than 1 percent, bringing their year-to-date gain up to 19.2 percent.

The early part of the week featured more deadlock between Republicans and Democrats, with no signs that the impasse over the government shutdown or debt ceiling was going to end soon.

Then on Thursday, a breakthrough was seen when House Republican leaders unveiled a plan to raise the debt ceiling for a short period of time. The extension would give the Treasury room to borrow through Nov. 22, and is contingent on the willingness of Democrats to participate in broad spending reduction negotiations. President Obama has not said whether he will agree to the terms, and negotiations remain ongoing.

Meanwhile, as the shutdown continued this week, most economic data from the government was delayed. However, the Department of Labor did release its initial jobless claims figures. It reported that the number of people filing for unemployment benefits rose from 308K to 374K last week, much higher than the 311K that was expected. The DoL said that half of the increase was due to computer glitches in California.

Finally, President Obama nominated Fed Vice Chairman Janet Yellen as the next Fed chairman when Bernanke’s term ends in January. Yellen is seen as a dovish member of the central bank and will likely continue Bernanke’s policies.